Not waving but drowning: The Michael Cheika era comes to an end

Nobody heard him, the dead man,
But still he lay moaning:
I was much further out than you thought
And not waving but drowning.

Somehow, the beginning of that famous poem by Stevie Smith is a suitable epitaph for the end of Michael Cheika’s era as coach of the Australian national team.

At the post-match press conference after the 40-16 defeat to England in Oita, Cheika was uncharacteristically muted.

There was no waving of the arms, no instant flagging-up of outraged emotion. There was not even much moaning.

In fact, there was no sense of animation at all.

“We went into the game looking to play our own brand of footy – which we did a lot of,” he said.

“But yeah, disappointed. We should have delivered…”

After a mildly provocative question about tactical naivete – “Do you think you were tactically off the pace today?” – Cheika bristled only momentarily, in a faint echo of the aftermath of the group game against Wales:

“That’s how we play, you know. I don’t know if we didn’t kick… we made a few kicks. Listen, that’s the way [not kicking] we play footy. We gave away two intercepts, they hurt. I am not going to go to a kick-and-defend game, maybe call me naive, but that’s not what I am going to do.

“I’d rather win our way, or no way at all. That’s the way Aussies want us to play, that’s it.”

Later in the press conference, captain Michael Hooper was asked about the performance of his opposite number in the back row, Sam Underhill.

“I don’t know how to answer that question. I wasn’t thinking about them, I was more focused on us,” he replied.

“They won the moments around restarts, the restarts of play. Us exiting our zone, us getting into their line.”

The presser read like a code-breaker for the Cheika era, from the insistence on a version of the ‘Australian way’ that didn’t include much kicking, the reluctance to pay as much attention to defending as attacking, and the latent refusal to analyse the opposition if it meant taking the focus off ‘the way we play footy’.

Above all, the stubborn streak that would not countenance change on any account.

There is a great deal to admire about Cheika’s philosophy of playing rugby. It is positive in its intent to keep the ball in hand wherever possible, and that does accord with Australia’s historical preferences. The concentration of focus on ‘what we do’ can also be a strength in building self-belief within the team.

On the other side of the argument, the ability to control the ball through quality defence and kicking has always been a feature of the best Wallabies sides, and they have always known as much about the opposition as they do about themselves. Ask Bob Dwyer. Ask Rod Macqueen. They will tell you. 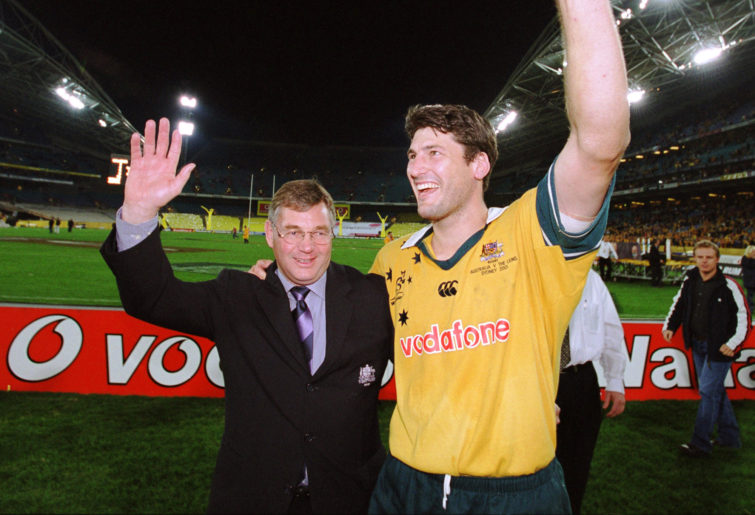 Rod Macqueen’s Wallabies side knew their opposition – and were mightily successful as a result. (Dave Rogers /Allsport)

Hooper was on much firmer ground when he zeroed in on the restarts as the main source of malaise. It was in this area of the game that so many of the blind spots of the Cheika era came sharply into focus.

On their own kick-offs, Australia used no fewer than three different kickers, an unhappy echo of the ‘musical chairs’ rotation which most supporters had hoped was a relic of the past.

Reece Hodge was used to pump the ball down the middle to England fullback Elliot Daly, then Christian Lealiifano came chipped the ball on the diagonal, with Matt Toomua replacing him in the same role during the second period.

Needless to say, the chopping and changing did not produce positive results. The flyhalves twice failed to make the ten-metre line, and none of the restarts, whatever the variant, succeeded in pinning England deep in their own 22.

Hodge’s kicks to Daly allowed England to set up comfortably outside their own red zone:

Daly makes a catch under no pressure outside the England 22 and is able to offload to Mako Vunipola on a run which takes play 35 metres from their tryline. This is a situation where England have a positive choice whether to run or kick on the following phase.

Despite being directed in between the England 40m and 22m lines, not one of Australia’s kick-offs were contested, and England got even better field position, up near midfield, from Lealiifano and Toomua’s short diagonals:

The inability to think in terms of pressure exerted through good kicking and defence cost the Aussies dearly on their own restarts.

When they were receiving the ball from England’s kick-offs, the stubborn adherence to the ‘Australian way’ of running the ball back proved equally problematic. Australia have enjoyed great success with this strategy in 2019, but they failed to adapt when England demonstrated they had a clear defensive plan in response.

Instead of kicking to Hooper on the right-hand side of the receiving committee, England chose to pinpoint Isi Naisarani on the left. The Wallabies are at their best running from right to left, in the direction of their most potent attacking force, winger Marika Koroibete. England’s restarts were designed to remove this option.

They reinforced the plan by designating their best technical tackler, No.7 Underhill, to make the first hit on Naisarani after he received the ball:

Underhill is able to get underneath Naisarani’s centre of gravity and propel him back yards in the collision. It is a textbook tackle and the Australian supports all have to drop a couple of steps backwards. There’s no momentum for them.

Now look at the domino effect on the following phases:

Will Genia takes lateral steps at two successive phases only ten metres from his own goal-line, and that allows the England defenders to look him off as a runner and double up on the first receiver. Unsurprisingly, Allan Alaalatoa drops the ball under the mounting defensive pressure on the second of the two plays.

This set a pattern which was repeated, mostly without variation, throughout the rest of the game:

Naisarani is forced back in contact initially by Underhill, Genia shuffles towards his receivers, and Lealiifano makes an ineffective kick towards the right sideline from underneath the shadow of his posts.

England had plugged an extra body into the line to ensure that Australia could not move the ball out from their own exit zone as smoothly as they had become accustomed in 2019: 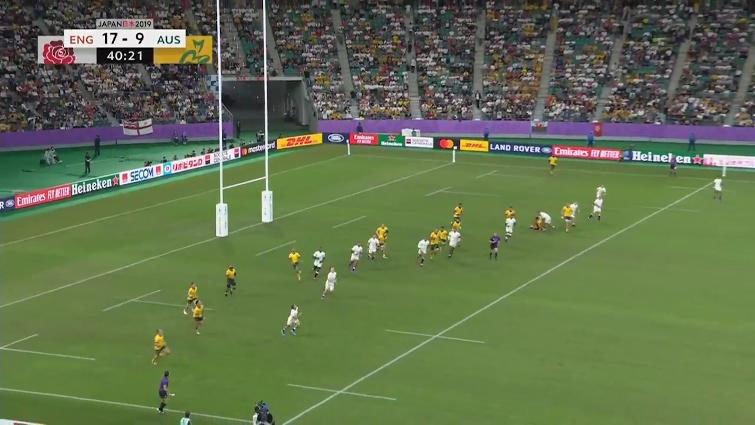 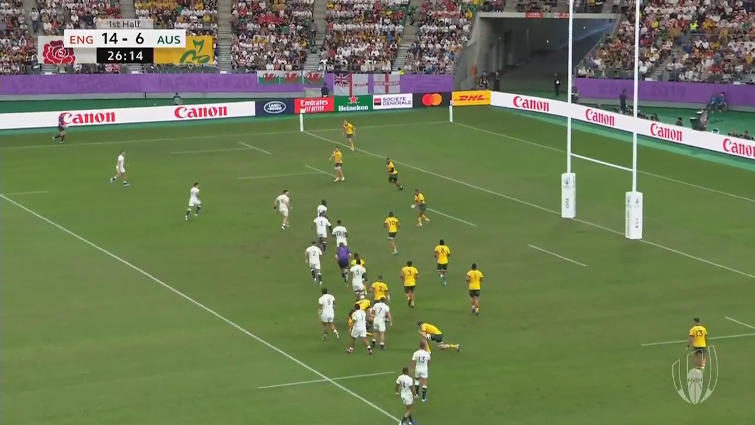 In both cases, there are 13 English defenders up in the line, knowing that Australia are unlikely to be able to kick their way out of trouble. They were right:

First, there was Kurtley Beale’s high-risk chip to the corner, collected by Johnny May. In the second half, after Underhill had dug in under Naisarani’s ribs for the third time, Genia could think of nothing better than to kick the ball tamely into touch 30 metres from his goal-line.

The cumulative impact of English pressure on Australian kick-off receipts yielded three tries and a penalty during the game. It became very material indeed, as Beale tried to run the ball from deep in his own end right at the death:

There is nothing wrong with playing the ‘Australian way’, but the best teams kick, defend and work their opponents out intelligently – both before and during the game. That is also a part of the Wallabies legacy, and it is the part Cheika neglected at his own cost.

Summary
After all the waving stopped, Cheika turned out to be a coach drowning in his own stubbornness. There were examples in selection even at this World Cup, in the persistence with Will Genia at scrumhalf even when the world and its dog could see that the team were best served by Nic White starting and Genia coming off the bench to finish the match. 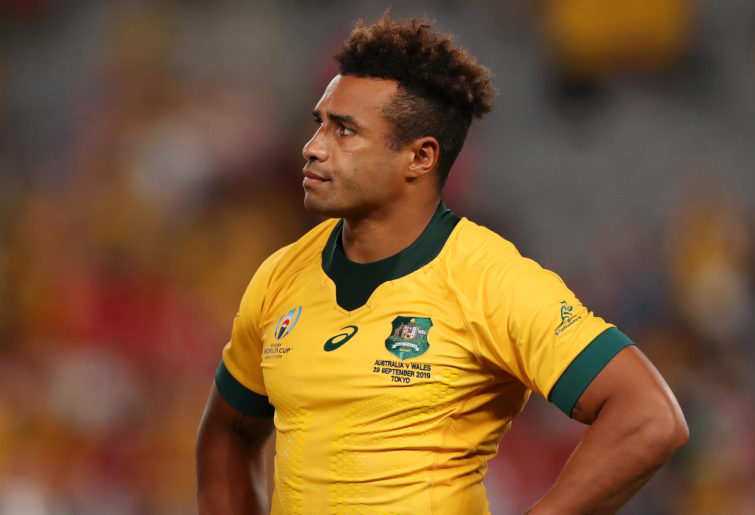 There was also inflexible strategising, even in the use of three separate kickers at restarts against England – a grim reminder of the ‘musical chairs’ issues on defence.

Above all, there was an underlying refusal to accept that kicking and defence are aspects of the game of rugby as legitimate as ball-in-hand attack; or that the opposition are worthy of analysis, and therefore adaptation.

When the cards have fallen out in Australia’s favour, as they did in Perth against the All Blacks, the Wallabies have been able to implement the Cheika plan and looked like world-beaters.

But when the flow of circumstances turned against them, arms have been thrown into the air far too readily – both in the coaches’ box during the match and in press conferences after it. Cheika has resembled Stevie Smith’s “dead man still moaning” too closely for comfort.

On the field, this meant his team has largely failed to adapt under pressure from their twin nemeses – England and the All Blacks – because they have not been encouraged to understand how the opponent will combat them and implement countermeasures.

As a consequence, Michael Cheika – good motivator and team-builder that he undoubtedly is – has floundered, further out from shore than he thought. Not waving, but drowning.