Sitting to his left, the midfielder’s new coach, Adam Simpson, couldn’t hold back the most sheepish of grins.

In the couple of weeks since that press conference, it wouldn’t be surprising if Simpson has been experimenting with centre-bounce line-ups to the point of delirium.

You wouldn’t blame him. The potential of the new Eagles midfield is the stuff coaches dreams of.

West Coast were already spoilt for choice with an enticing balance of inside and outside mids, but this is an embarrassment of riches. According to Brownlow votes, they now have five of the top 30 players in the AFL – no other team has more than three.

It’s going to be hard to stop some combination of Tim Kelly, Luke Shuey, Elliot Yeo, Jack Redden, Andrew Gaff and Dom Sheed from getting a clearance. 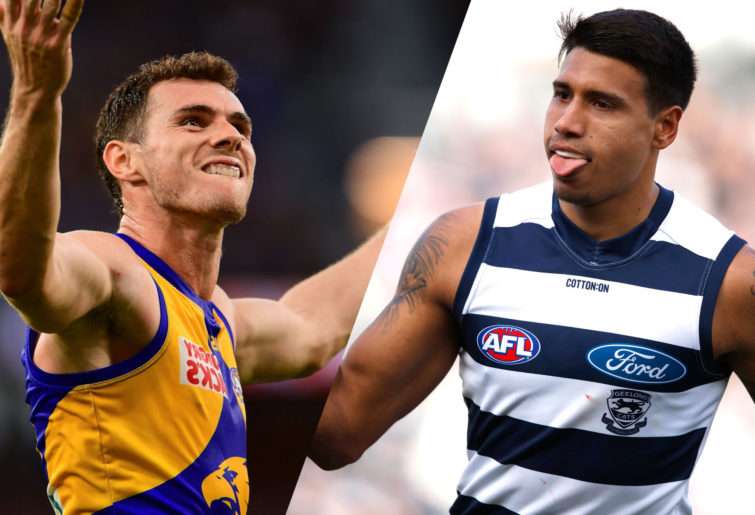 Kelly will slide in perfectly to what has become the best midfield in the competition, making the Eagles the number one candidates to dethrone Richmond.

When questions were thrown at general manager of football Craig Vozzo regarding the club’s commitment to acquiring Kelly, he was clear:

“If you asked if we’d rather have the draft picks, or have Tim Kelly… I think the answer is Tim Kelly.”

Vozzo and the Eagles know they’re in a premiership window right now. Heavily favoured to at least get back to the grand final this year, they also know 2019 was a blown opportunity.

Inconsistency was the theme of a season that included a premiership hangover, a mid-season return to form, and a demoralising end.

In the last three weeks, they had an unexpected loss to the Hawks at home, Willie Rioli’s career-altering ASADA ban, and a final-quarter fizzle at the hands of the Cats to finish them off.

During this final month collapse, the Eagles also unearthed some worrying deficiencies. When under pressure, they were consistently beaten in contested ball and resorted to ultra-conservative ball-movement to dig themselves out of holes.

But the Tim Kelly trade has turned a half-empty glass into a half-full one.

Yes, a single-player addition in the AFL is less likely to make an impact than just about any other team sport. But Kelly, who has become a top-ten player in the competition, is skilled in almost every area of the game – everything you want a Mr Fix-It to be.

Despite their faults, West Coast finished only one win shy of their 2018 premiership-winning record. Running it back with virtually the same team, plus Tim Kelly, will make them at least a game better in 2020.

There are several reasons for this.

Centre-bounce domination
Clubs will be putting more time into centre-bounce scouting reports than their own gameplan against the Eagles.

The first big questions for opposition coaches to ponder with the addition of Tim Kelly are, “who do we tag?” and more importantly, “will it even matter?”

Focusing your best tagger’s attention on one player is a dangerous game when you run the risk of letting other talented mids off the leash.

With a wealth of capable ball-winners, the Eagles have already learnt to exploit this.

Watch how Elliot Yeo is able to eliminate his tag, Angus Brayshaw, from this centre bounce, before getting the clearance himself via Sheed’s slick hands. 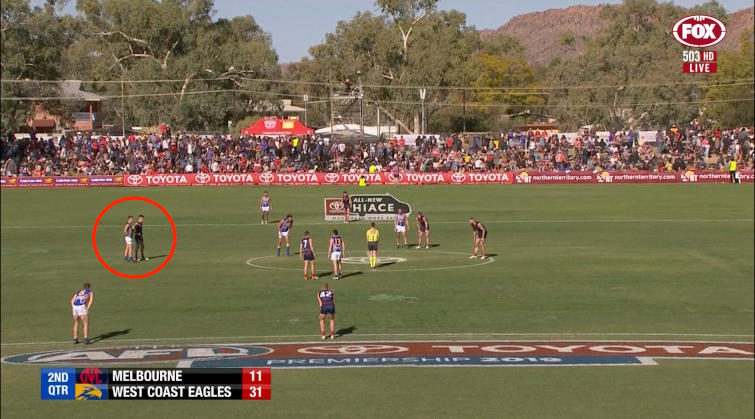 This is what dealing with taggers looks like at its best. With Brayshaw not thinking about winning the ball, Yeo works him underneath it using his strength at the perfect moment.

The strategy of former tagger and midfield coach Nathan van Berlo will make discarding taggers at stoppages customary for this star-studded midfield.

Stopping Nic Naitanui’s influence is another major priority on all West Coast scouting reports. But with Kelly flying past him, it becomes an even harder problem to solve.

These two are a match made in heaven.

When playing on the ball at Geelong, Kelly often set up as far away from the centre circle as possible. It’s a set play designed to get Kelly on the burst through the stoppage which, if done properly, is a recipe for success. 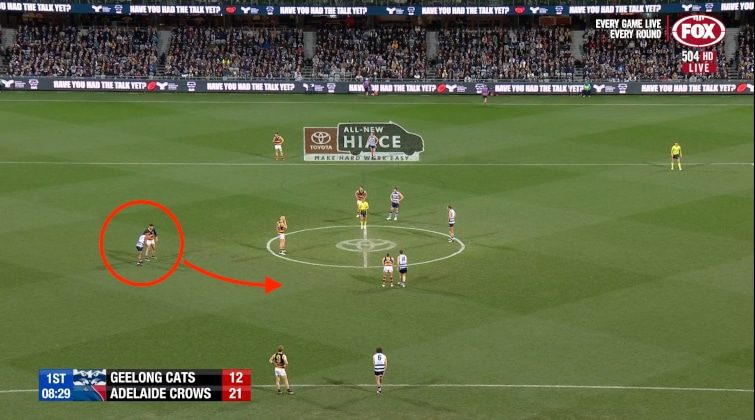 Eagles have run similar plays from the centre bounce in the past, too. They’ve used Gaff or Sheed as their go-to rover because of their efficient ball use.

The only difference? Nic Nat puts the ball in the midfielder’s lap.

Don’t be surprised when Adam Simpson slots Kelly right into this role if Naitanui is rucking. It’s this very image that was probably racing through Simpson’s mind as grinned through the Kelly press conference.

Decision-making
It’s around the ground where the blemishes emerged towards the end of the year for the Eagles. In particular, it was their ball movement, or lack thereof, that let them down in key moments.

Too often they seemed content with bombing to their giant spine of Nic Nat, Tom Hickey, Jack Darling, and Josh Kennedy in the hope of a bailout mark.

At one point in the first quarter of their elimination final against Essendon, they kicked the ball along the boundary four consecutive times.

During this sequence, Tom Barrass could’ve attacked the defence by looking inside to Jeremy McGovern, or using the switch through one of the best kicks in the league, Lewis Jetta. 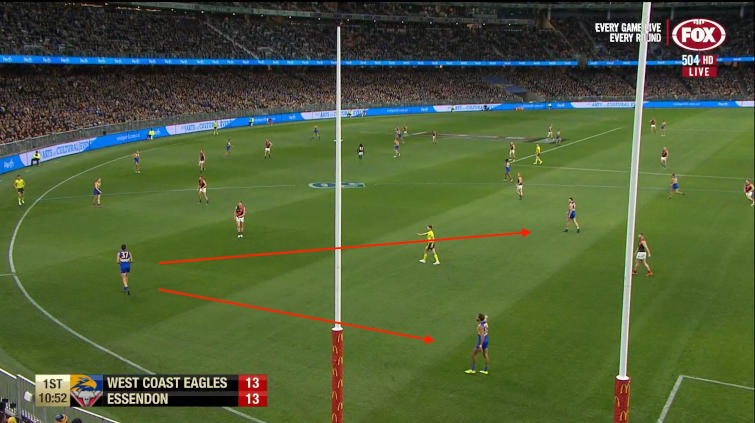 Instead, he chooses to go back down the line to a contest where the ball is once again turned over.

The next time however, McGovern finally uses the switch and look what happens:

Tim Kelly is a workhorse and his ability to get around the ground and change angles like this will be a massive help to a West Coast offence that had begun to look one-dimensional.

He is creative with ball in hand and actually uses the switch in offence which inevitably leads to effective forward 50 entries.

A team’s average marks inside the 50-metre arc is a good ball movement stat. It shows how often they’re in a position to hit a forward target. In modern footy, having two big key forwards such as Kennedy and Darling no longer guarantees this.

The Eagles were second-last in marks inside 50 in 2019. The Magpies and Bulldogs led this stat, each without traditional key forwards, because of their slick and aggressive ball movement.

Geelong were third, partly because of kicks like this from the Kelly:

The Eagles are in need of a ball-movement refresh, and luckily for them, their new recruit has a lot to offer.

Contested possessions
Tim Kelly is a true Swiss Army Knife. Having someone who can contribute so effectively around the ground and remain a top-15 contested ball-winner in the competition is rare.

You would think with players like Jack Redden, Elliot Yeo and Luke Shuey, West Coast would dominate the contested side of things. Not exactly.

Contested possession differential remains one of the most accurate indicators of success in the AFL and the Eagles finished second last in this category in 2019.

It let them down most when it mattered most. Look at the Cats simply outwork them in the semi-final:

This can’t be put down to anything structural. It’s all the cliched stuff: mindset, determination, will-to-win, whatever you want to call it, West Coast lacked it for large chunks of this year.

You could chalk their poor first two months down to second-year blues after winning it all in 2018. Later in the year they looked fatigued, and the Willie Rioli saga may well have been the final emotional straw.

But despite the plethora of tactical advantages Tim Kelly provides, his biggest impact could be psychological. He’s created a much-needed spark the Eagles as a whole.

He had Adam Simpson giddy with excitement at his press conference and Nic Naitanui bantering on Twitter.

Tooo dardy, Welcome home TK… the 11 locker is vacant but if you’re hygiene is like Oscar Allen’s you will be relegated to the other side of the changeroom #CleanSheet #sohappy

After a long, inconsistent, emotionally draining season, a dejected club is now reinvigorated.

The Kelly trade gives West Coast the best midfield in the competition and the biggest chance of any team to end the Tiger reign.