It’s that time of year Super Rugby clubs are filling their final roster spots for the forthcoming season.

The Waratahs are no exception, having been on a recruitment blitz in recent weeks with several new signings. One of the new additions is particularly intriguing.

Charlie Gamble is not your typical young Waratah recruit. Most up-and-comers crack the New South Wales squad these days via underage or school teams at the state and national level. Gamble, however, is an outlier.

Just over 12 months ago the 23-year-old was finishing up a season playing suburban rugby in Sydney. ‘Subbies’, as it is known, is an amateur competition played below the city’s premier competition, the Shute Shield.

In essence, Subbies is a full three levels beneath the fully professional Super Rugby competition. After penning a one-year deal with NSW last week, Gamble is now just a few months away from completing this monumental leap.

His rise up the ranks in Sydney began in April 2018 after crossing the ditch from his native New Zealand. With his entire life up to that point spent in his homeland, Gamble was ready for a change of scenery.

“I’d had 22 years or so in Christchurch and my partner and I decided we needed to get out of our comfort zones, mature as people and learn about life,” he recalled.

A new city offered new hopes but also the realisation he was an unknown quantity.

“I knew it was going to be hard for me to make it as a professional here because nobody knew who I was.”

Subbies was a step down for Gamble based on his past experience. He had been a part of the Crusaders setup, including playing for the Knights, the Super Rugby franchise’s development team. This was after a promising school career at St Bede’s College, which boasts among its alumni current Brave Blossoms captain Michael Leitch and lock Luke Thompson.

But Gamble saw Subbies as a good entry point into his new city. It was an environment in which he could recapture his mojo after an indifferent period.

“I was happy to play at Petersham, as it was an opportunity to enjoy my footy more,” he explained. “Before that I had an injury and wasn’t too sure what I was going to do rugby-wise.”

Of course being a fully amateur player meant the need to earn a crust off the field. Gamble gained employment delivering alcohol to shops and venues around Sydney, which was flexible enough to work around his training and playing commitments.

Gamble’s journey on the pitch to rugby professionalism got off to a great start. With him featuring prominently in their back row, Petersham ran rampant through Division 1, winning the minor premiership and grand final.

He admitted the playing standard was decent, comparing the better Subbies sides to seconds teams in grade rugby.

The next rung up the rugby ladder was Shute Shield. Sydney’s top club competition is semi-professional, with a mix of aspirational youngsters, hardened veterans and Super Rugby squad players.

Gamble linked up with Eastern Suburbs for the 2019 campaign, in which he quickly felt the increased demands of the higher league.

“The main difference was the physicality. You’re playing against bigger bodies, and many players who are hoping to become professionals,” he said.

Gamble had a stellar three months with the Beasties. Unfortunately a broken arm sustained in Round 12 brought his season to an abrupt end.

Despite the injury setback, there was still time left in the rugby calendar. An offer came to play with Sydney in the National Rugby Championship, which began immediately after the Shute Shield. 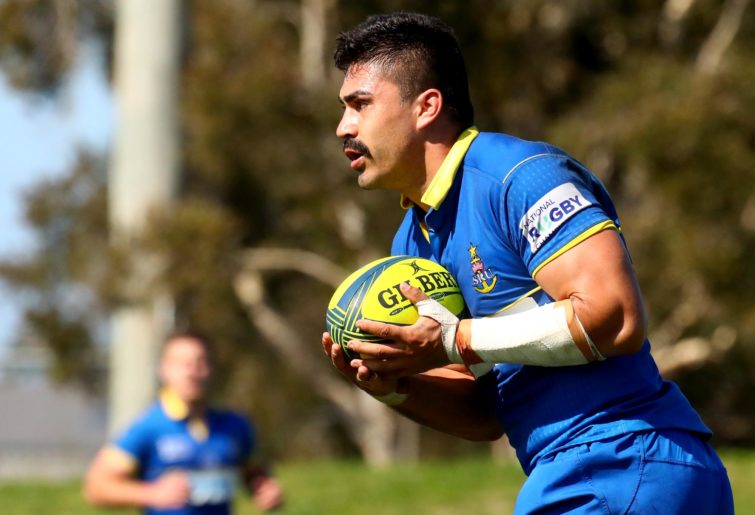 The NRC is Australia’s elite club rugby competition. It comprises seven domestic teams from four states and territories, including the fully professional Western Force. The eighth team is the Fijian Drua, who took home the title in 2018.

“The teams try and pick the best players from each state. You’re playing against Super Rugby players every week, so it’s a good test,” he said.

There were quite a few internationally capped players as well. Gamble saw the NRC as a great opportunity to showcase himself against high-quality opposition and perhaps catch the eye of professional scouts.

“Those are the games where you really want to put your best foot forward,” he sad. “Playing for Sydney was a chance to get on the big stage and do what I know I can do.”

Gamble sure didn’t waste any time. In Round 3 he bolted through the Queensland Country line to dot down for a five-pointer with his first touch of the ball in over three months.

There were other strong carries and some big tackles, but it was his thieving of opposition ball that really stood out. Like a giant gargoyle perched atop a gothic cathedral, Gamble seemed unshiftable from the tackle area. Game after game he stymied opposition attacks through latching on to the ball for pilfers and forced penalties.

Gamble started each of the royal blue outfit’s final five games at openside flanker. He enjoys playing on the side of the scrum where he has been honing his craft for several years.

“In my first year out of high school I decided that No. 7 was my best position. I really studied this part of the game down to its core,” he said.

“Getting turnovers is a strong part of my game now. I feel that I can read the play well, and have a good understanding of when to go in and when to stay out.”

Gamble’s fetching could be a great asset for the Waratahs, who struggled in this area last season. According to foxsports.com.au, they ranked second to last in Super Rugby in turnovers created.

Opportunities for him to do his dirty work with the Tahs could be limited. With a world-class player currently occupying the No. 7 jersey, Gamble is keeping his goals achievable.

“My aim is literally to get game time. Obviously Hoops (Michael Hooper) is there and he’s one of the best No. 7s in the world. But if he gets injured or they decide to rest him, then hopefully I can make my debut,” he said.

It is probable that Hooper will need to ride the pine at times next year. He has spent the past weeks hammering away with the Wallabies at the Rugby World Cup, which came straight after a tough Rugby Championship and a full Super Rugby season in which he led the competition in tackles.

If Hooper sits, Gamble’s number may come up. It would complete a remarkable rise for the Kiwi – ascending three levels of rugby in two years is a rare feat in the modern era.

With training beginning in early November, he will complete his final shift behind the wheel for his day job last week. After that, Charlie Gamble’s next big delivery will come wearing a sky blue jersey on a Super Rugby field.