It wouldn’t be college football in October without at least one season-changing game a week.

We’ve seen some giants fall this month so far, and another big program – this time out of the Big XII conference – has seen their undefeated record blemished by an unranked team. Yet more proof that you just can’t sleep on any team in college football these days and why college football’s 14-week season is the most unpredictable, exciting and enthralling season there is.

In case you missed the action across the weekend – lots of it in very wet conditions – read on for a look at who covered themselves in gridiron glory and who didn’t with the Week 9 edition of winners and losers.

Winner: Kansas State
Chris Klieman, a four-time FCS national championship-winning coach at North Dakota State, is now doing big things in Manhattan this year, and we saw the best example of that on Saturday afternoon when his Wildcats took down the mighty Oklahoma Sooners 48-41, a team they had not beaten at home since 1996. A landscape-changing win that throws the Big XII race wide open.

Loser: Wisconsin
The Badgers led Ohio State 10-7 early in the third quarter and then couldn’t stop the Buckeyes from finding another gear and scoring 28 unanswered.

Winner: Chase Young
The best defensive player on the Ohio State team had four sacks and tied a school record with five tackles for loss in the 38-7 demolition job over Wisconsin. It’s a shame that defensive players don’t normally get a look-in for the Heisman, because Young is on fire at the moment and is among the best players in all the land.

Loser: Texas
They nearly lost last week to lowly Kansas, and this week the Longhorns sputtered to a disastrous 27-27 road loss to an unranked Texas Christian squad that had a freshman quarterback at the helm. Longhorn quarterback Sam Ehlinger’s four interceptions didn’t help. In case you were still wondering, this loss confirms that Texas are most definitely not back.

Winner: Michigan
Just when you get ready to write the obituary for Michigan they win a game they probably shouldn’t have. They smacked Notre Dame 45-14 for only their second victory over a team ranked in the top ten on a wet night in Ann Arbor. They were 9-11 in their last 20 games against ranked opponents. Good luck working this team out.

Loser: South Carolina
The Gamecocks beat Georgia, had their chances to pull off another upset against Florida and then somehow managed to lose 41-21 to Tennessee, who played their backup quarterback.

Winner: Appalachian State
The Sun Belt conference isn’t great, but we shouldn’t let that detract too much from the Mountaineers’ undefeated record, which was extended on Saturday after a 30-3 win over South Alabama. It’s going to take some serious Group of Five chaos, but there’s a chance the Mountaineers sneak their way into a New Year’s Six bowl.

Loser: Texas Tech
They eventually lost to Kansas 37-34, but it’s how they got there that beggars belief. They blocked a game-winning field goal attempt from the Jayhawks, then Tech’s special teams tried to coordinate some sort of return only to fumble the ball inside their 20. The Jayhawks didn’t miss their second shot at a field goal, sealing a remarkable loss.

Winner: North Dakota State
The defending FCS national champions won the battle of the Dakotas for the 28th straight time with a narrow 23-16 victory over South Dakota State. The win was sealed by a 71-yard touchdown run from Adam Cofield on fourth down with 2:32 to play.

Loser: Arizona State
The ranked Sun Devils were down 35-7 to UCLA before a furious comeback that fell short. They ended up losing 42-32, a result they will rue for some time to come.

Winner: Everyone who thinks Notre Dame is overrated
With their loss to Michigan it’s now official the Fighting Irish will not make the play-offs, and that is a very good thing. The last couple of times Notre Dame has played in either a semi-final or the championship game they’ve been thoroughly embarrassed. At least this season we’ll be saved from watching it all unfold in the manner we all predicted.

Loser: Purdue
The wheels are off the Boilermaker wagon now after so much optimism coming into Jeff Brohm’s third season in charge. A 24-6 home loss behind a redshirt freshman quarterback to a suddenly resurgent Illinois shows the value of veteran quarterback Elijah Sindelar and star receiver Rondale Moore to this team. Both missed Saturday and it showed.

Winner: Louisiana State
The Tigers from Baton Rouge outlasted the Tigers from Auburn 23-20 to remain undefeated, setting up a huge game next up against Alabama. That they didn’t trip up by looking ahead – as Wisconsin did last week against Illinois – is a win for college football fans too. The LSU-Crimson Tide contest shapes as being the best we’ve seen yet this season.

Loser: Michigan State
The Spartans lost their third straight game on Saturday afternoon, easily beaten 28-7 by Penn State, turning the football over four times. I think we’re at the end of the Mark Dantonio era in East Lansing.

Winner: Minnesota
The Gophers remain undefeated after putting a 50-burger on Maryland in the Twin Cities. Tanner Morgan continues to play largely mistake-free football at the quarterback position, and potentially the best running back you’ve never heard of, Rodney Smith, keeps finding lanes and rolling up yardage. He had 103 yards and a touchdown in the 52-10 win. We’ll learn more about Minnesota with Penn State and Iowa to come over the next few weeks.

Loser: Missouri
The Tigers lost 29-7 to Kentucky, who were starting receiver Lynn Bowden at quarterback. Bowden ran for 204 yards, which was nearly as many as Missouri (289) managed as a whole. One more embarrassing loss for Mizzou this season.

Winner: Indiana
It’s still October yet the Hoosiers have already punched their ticket to a bowl game after an impressive 38-31 win on the road in Lincoln against Nebraska. Memorial Stadium is a tough place to come in and play well, but the Hoosiers under head coach Tom Allen seem headed in the right direction. The win over the Huskers was IU’s third straight conference win, something they haven’t accomplished since 1993.

Tennessee went down 31-26 to Ole Miss and, after a controversial decision resulting in a turnover, turned their home stadium into a rubbish tip. 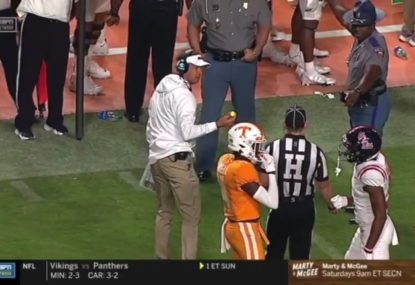