Whiteout! How selection confidence helped England beat the All Blacks

Wind the clock back to November 10, 2018, and a cold, bleak afternoon at Twickenham.

It is the 52nd minute of the crunch autumn match between England and New Zealand. The two teams haven’t played each other for exactly four years, in one of the more bizarre pieces of scheduling by World Rugby.

England make a fast start, getting out to an early 15-0 lead. Slowly the All Blacks start to reel the Red Roses in, clawing their way back to 15-10 at the half, then 15-13 courtesy of that rare bird, a Beauden Barrett drop goal six minutes after the break.

Roll the clock on another six minutes, and New Zealand head coach Steve Hansen is making the most telling substitution of the game, replacing blindside flanker Liam Squire with second-row ‘tweener’ Scott Barrett.

With Barrett’s addition and a raft of substitutions on the other side upsetting England’s rhythm at the set-piece, the home lineout collapsed dramatically. England lost six balls against the throw in the last half-hour as the match entered a blackly comic phase – the Twickenham crowd cheering wildly when England finally won one of their own balls. Scott’s brother Beauden popped over another penalty and the Kiwis edged home by a short nose, 16 points to 15.

Steve Hansen and his fellow coaches stored this information away for future reference, and it must have played a large part in their selection for the crucial semi-final in Yokohama. They abandoned the twin openside policy which had played such a big role in the recent rejuvenation of their game, and picked Scott Barrett from the start in place of Sam Cane.

They probably thought the England lineout presented an even more attractive target than it had done at Twickenham one year previously. In November 2018, England had fielded three genuine jumpers in Maro Itoje, George Kruis and Brad Shields, with a fourth outlet option in number 8 Mark Wilson.

In the last few months, Eddie Jones has gone all-in committing to the twin openside theory, with Sam Underhill and Tom Curry flanking Billy Vunipola (another non-jumper) in a new back row. As Jones joked after the game, this gave England “two-and-a-quarter receivers” at lineout time, fewer than they’d had in November.

What could possibly go wrong for New Zealand? Surely, they would mop up at the lineout and shut England out of the game.

A large part of success in selection is consistency. As a rule of thumb, the team which is able to adapt to different opponents with minimal changes in personnel wins the game. When Hansen picked Scott Barrett and Jones stayed with the same back-row, England had already gained a significant advantage at the selection table.

To prove that advantage on the field still required a monumental effort from the key components of England’s lineout – the Saracens core of coach Steve Borthwick, thrower Jamie George and caller Maro Itoje.

The accuracy of the effort was truly impressive. Because of the disadvantage in numbers, England had to outmanoeuvre their opponents by using movement, or timing-based lineouts. To repeat this process consistently requires great concentration and precision.

They also needed a substantial contribution from Tom Curry and Sam Underhill as boosters and in Curry’s case, as a receiver. Curry won three throws despite standing just over six feet tall. England set the tone very early in the game:

At the very beginning of the set-piece, New Zealand look to be in good shape with Scott Barrett, Brodie Retallick and Kieran Read overloading Curry and Itoje at the front: 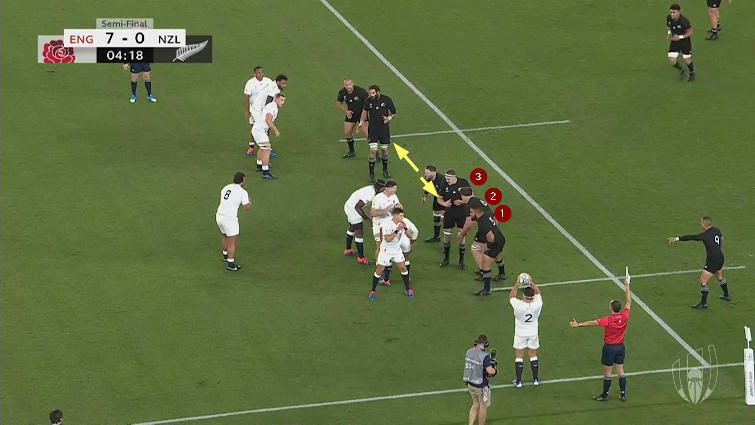 Read is looking for a ‘tell’ which will send him to the tail to front lift on Sam Whitelock, or keep him where he is to hoist Retallick.

Itoje immediately changes the formation by first opening the gaps, and then shifting towards the tail: 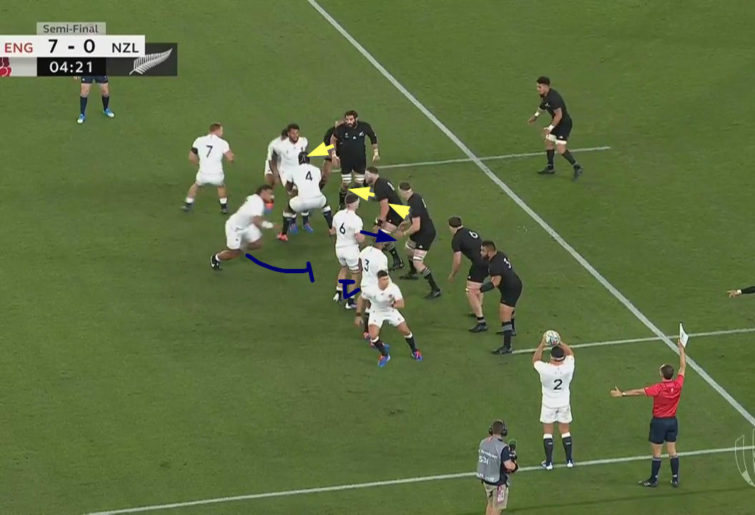 He drags both Read and Retallick with him, and this creates an opportunity for Billy Vunipola to enter from the halfback position as a back lift for Tom Curry. When Curry reaches the high point of his jump, Scott Barrett (at five inches taller) is hardly able to get off the ground because the support has fragmented around him.

The lineout requires five different bits of movement in order to be successful, and finishes with a successful front peel by the second of the ‘Kamikaze kids’, Sam Underhill.

The theme of the England lineout winning ball by movement, and decoying key All Black lifters and jumpers away from the ball, was a repeated one:

In the first instance, there are four separate movements (including a fake around the tail by scrumhalf Ben Youngs) which cumulatively mean New Zealand are never able to put together a cohesive pod of jumpers and lifters in response. Curry and Underhill are the two bookends who lift for Itoje at the end of the play.

In the second example, the English manoeuvres persuade Sam Whitelock to lift for Retallick, so he cannot be a receiver at the critical moment against Curry: 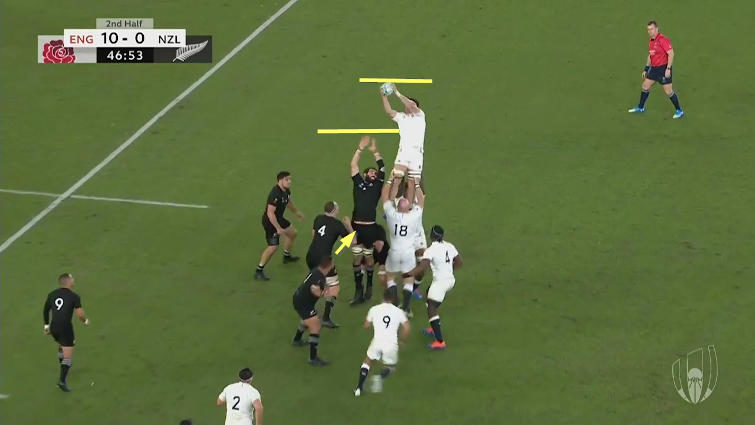 The England lineout only began to falter, ironically enough, after Sam Cane had come on to replace Scott Barrett in the second period, and George Kruis took over the lineout calling for England from Maro Itoje:

For the first time, there is no prior movement in the line and Itoje is exposed to a straightforward contest with Retallick. New Zealand put together a lifting pod around him, the call is broken and Ardie Savea picks up the pieces at the back.

By then, the stability of the England set-piece had released the Underhill and Curry to do their real jobs in the open field. They connected off first receiver to score a try which was subsequently ruled out for obstruction (at 5:31 on the highlight reel), and they ruled the roost at the point of contact without the ball.

The twin openside policy works best when the two sevens have slightly different skillsets. For England, Sam Underhill is the more destructive tackler, while Tom Curry is slightly better over the ball after the tackle has been made.

Wherever they are on the field, the pair are never very far from each other:

These are two turnovers at the breakdown by Curry, but both are nailed down by the presence of Underhill behind him. At times, it felt like Ardie Savea was fighting a lone battle in the All Blacks back row against the young English tyros.

Underhill has established himself as one of the most deadly one-on-one tacklers in the entire competition. He stays low and really sticks the ball-carrier – once attached they are either knocked down immediately, or driven back yards and yards through contact:

Underhill finds himself one-on-one with Beauden Barrett in the short-side kick chase. Not only does he flatten the Kiwi fullback comprehensively, he gets up off the ground to have another stab, no more than three inches off the deck, at the subsequent New Zealand ruck.

What did for Beauden also did for his brother Jordie when he moved into the All Blacks backfield late on in the game:

Not for the first time, the England no.7 gets in underneath the ribs of a taller opponent and drills him backwards in contact to force the turnover.

Underhill was also the key to England’s developing line-speed in the second period with New Zealand looking to play their way back into the match:

New Zealand love to make the second pass in off the sideline in these positions, but Underhill is already waiting for Retallick when he receives the ball from Sonny Bill Williams.

It was England, rather than New Zealand, who built momentum when the men in black had the ball in their hands: 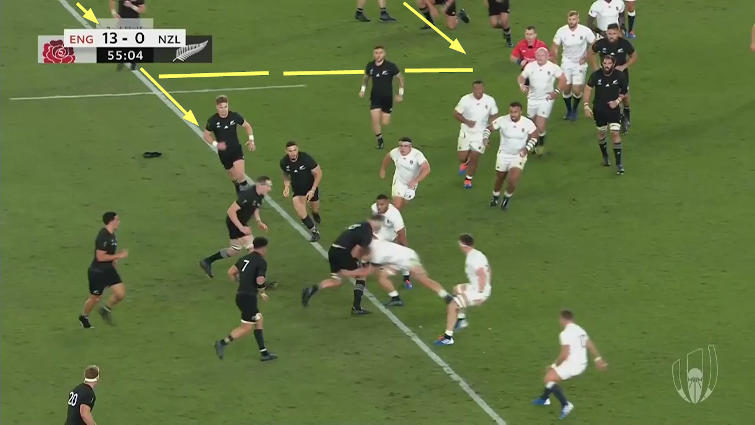 The tackle is made almost ten metres behind the site of the previous ruck (where a New Zealand player is in the process of getting up), and that means a dominant collision win for the defensive side.

Summary
With the benefit of hindsight, or maybe better foresight, Steve Hansen and his coaches would not have selected Scott Barrett to start at blindside flanker against England in the semi-final at Yokohama. They would have stayed with Sam Cane instead. The combination of Cane and Ardie Savea on the flanks was integral to their recent form, and it outweighed the potential advantage at lineout time.

England kept their faith in the selections which had brought them to the brink of a World Cup final, while the All Blacks selectors blinked in the light of a better-imagined future. On such small spindles the wheels of fortune turn, and the biggest prizes can be won and lost. 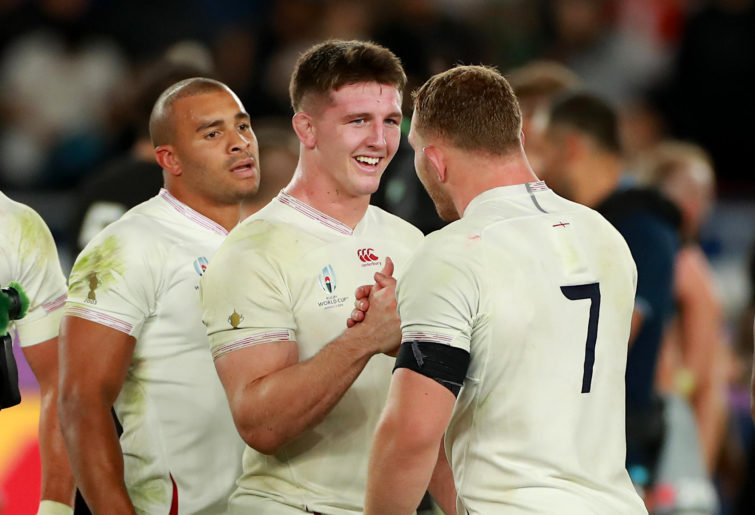 The England lineout, with no natural receivers in the back row, still had to prove its point on the field however, and in the process reverse that nightmare half-hour at Twickenham last November. Just as it will have to prove itself again next weekend, when everyone starts to talk up the giants in the Springbok lineout instead.

To their credit, Steve Borthwick (as coach), Jamie George (as thrower) and Maro Itoje (as captain) managed their redemption superbly, against what many commentators imagined to be insuperable odds.

The two small England flankers played their part in the lineout, especially Tom Curry as ‘one quarter of a receiver’. When they were released into open field, they were unstoppable, while Barrett was all but invisible.

England will likely stick to their guns against a monstrous South African eight in the final, which in turn means a fascinating clash of new against old methods, both in terms of selection and tactics.

This will be classic old South Africa, kicking between 30 to 40 times in the game and looking to crush the men in white with physical pressure in defence and at set-piece, playing against a new England, looking to meet that force and deflect it using smart movement to overcome the physical choke points.

Events in the world of rugby are moving much too fast for there to be a slowing down now. As the Swedish writer John Ajvide Lindqvist once said: “That’s how things are these days: everything must move aside to make room for the new, all the time.”