I remember as a 16-year-old watching Nelson Mandela handing the World Cup to François Pienaar.

I didn’t realise at the time the significance of what I was watching. I was still smarting from the early exit of the All Blacks and as a teenage boy, I was a swirling cauldron of hormones and what ever else makes boys go crazy at that age. So much so that the immense achievements I had just witnessed were lost on me.

Years later I would reflect on that moment and start to appreciate what I actually saw. This was when I realised that rugby can transcend the confines of the field and have an impact on the wider world. Sometimes this is a statement of acceptance and a societal shift, as in the South African win in 1995. Sometimes it is in the form of making a statement that a society or a people wont be held down by tragedy or circumstance, like this year after Typhoon Hagibis.

Rugby is a funny old game. It is contained in a field 106 metres long and 68 metres wide, give or take, but sometimes the stars align and rugby explodes off the pitch and makes a statement or a stand that reaches a much wider audience – the ones who wouldn’t know a scrum from a line-out.

This World Cup has certainly served up a few moments that will have lasting impacts, not just in our beloved game, but that can potentially have spill-over impacts outside the field and outside the stadium. It is these moments that have made me take a step back and truly appreciate what our game is actually capable of achieving. And now without the distraction and pressure of the All Blacks’ success or lack there of, I find I am more capable of appreciating them.

One of the criticisms of the Rugby World Cup is the David and Goliath match-ups during pool play. The argument is that tier-one countries use these games as training runs and essentially embarrass and outclass the lower-ranked teams. While it is true that blowouts do occur, they are far less common than in previous iterations of the tournament.

What the criticism fails to capture is the shear exhilaration these players must feel when they get to face off against the higher ranked teams. For these guys it is not about winning as such, but the smaller victories – scoring a try, or taking the lead even. Imagine those Namibian players going back home and telling everyone that for half an hour they were leading the All Blacks.

Then we have Uruguay. I challenge anyone to watch the Uruguay captain in his post-match interview after leading his team to victory over Fiji and tell me that the Cup doesn’t mean something to these smaller teams. For Uruguay, this was their way of showing where they want to be in the global pecking order. 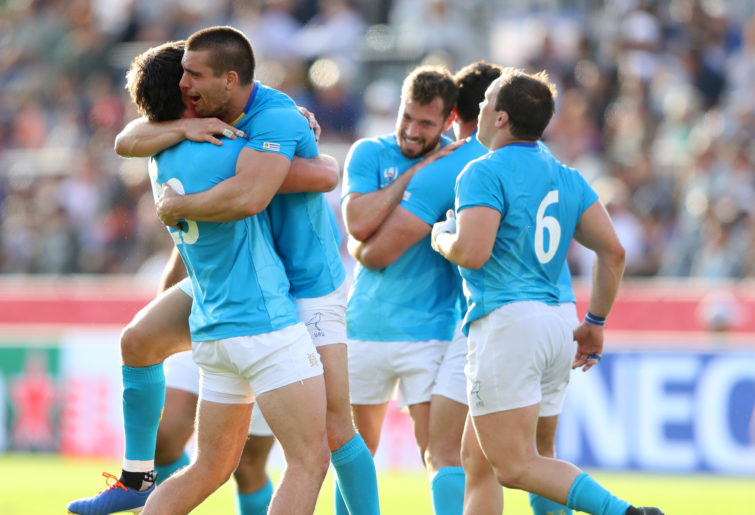 We in the top-tier countries often fall victim to only seeing the top of the mountain. We look at the top ten teams, and we also never even consider not being in the World Cup. But for the other teams – the ones that have to qualify – this tournament marks the many years of hard work and training, solely focused on one or two games. This was that game for Uruguay, and the shear joy on Juan Manuel Gaminara’s face as he spoke about his pride in his team and his country was priceless.

For Japan, even though they are knocked out now, the culmination of four years’ work happened on October 13 when they beat Scotland to qualify for the quarter-finals for the very first time. Granted, they would have anyway – but by taking down Scotland, it removed any asterisks next to the record.

They did this by not just beating Scotland, but also Ireland, who came into the tournament ranked number one. By going through unbeaten until the last, and taking out two tier-one sides in the process, they firmly placed a marker in the sand on where they should be in the world order.

They also did this despite having their home tournament unsettled by the super-typhoon. The work of so many people went into ensuring the tournament carried on to show respect for all the sacrifices so many had made to be there to compete. The complete silence that marked the beginning of each game post Hagibis was a touching way for the fans from around the world to pay that respect back to the people that helped keep the tournament going and for those that lost their lives in the storm.

So, having let go of the emotion of losing the semi-final to a very deserving English team, I have arrived at a place where I can step back and appreciate all that the Cup actually offers and resolve never to be blinkered to how amazing and far-reaching our heavenly game can be.

There is still more drama and beauty to play out in this tournament. Both teams in the final have performed remarkable turnarounds.

England were knocked out at the pool stages in their own backyard four years ago, and South Africa lost their very first game of this tournament. No team to have had either of those things happen has gone on to win the whole thing.

This year, that changes.

It may not be quite as large a historical moment as Madiba handing over the William Web Ellis Cup to François, but that moment will be a magical and momentous one nonetheless.

Rassie Erasmus: “Who is this water carrier and can I sign him up on a three-year deal?”

What on earth happened here?

Wallabies World Cup winner, and Tonga coach, Toutai Kefu, has revealed the horrifying details of the home invasion where he was stabbed and his wife seriously injured by a machete blow.