Merry Christmas punters! Yes, it’s that time of the year when Santa delivers the best day of racing on the calendar.

Derby Day has always been a cracker, with four Group 1 races and five other group events on the card, but it has also been bolstered by Racing NSW, which has put on a $7.5 million race in Sydney.

You can check out my runner-by-runner preview of the Golden Eagle, but this piece takes a look at every race on the card at Flemington.

Racing starts early and my advice is to stake your bets accordingly as you don’t want to be broke by the time your best bet comes around later in the day.

My Melbourne Cup preview will go live here on Monday, so also stay tuned for that.

Best of luck if you’re investing some hard-earned on the weekend.

Race 1 at 11:45am – $300,000 Group 2 TAB Stakes (1200m)
There was a lot of hype about the Ellerton-Zahra gelding Zoutori after he produced an eye-catching run in the Gilgai Stakes behind Sunlight and Santa Ana Lane. A repeat of that here would see him win. But he had a plain jump out the other day and is awfully short.

I didn’t mind Tyzone’s run in that Gilgai, who was first-up from a spell and having his first look at the Flemington straight. At double-figure odds, he’s good value for a horse that was only beaten three lengths that day.

Race 2 at 1:20pm – $300,000 Group 2 Wakeful Stakes (2000m)
I’m a big fan of Flit, who won the Thousand Guineas impressively, but am concerned about her ability over the 2000m with a long straight at Flemington. Like the first race, I’m looking for better value.

The lightly raced filly Vegas Jewel was a strong performer late in the Group 3 Ethereal at Caulfield a couple of weeks ago and looks the top choice if you want to take on the favourite, Flit. Vegas Jewel is a daughter of Melbourne Cup winner Shocking, so the distance won’t be a problem.

Race 3 at 1 pm – $500,000 Group 3 Carbine Club Stakes (1600m)
The top picks in the market are backing up from the Caulfield Guineas and that looks a strong formline. Dalasan was favourite in the Guineas and was only moderate, finishing fifth after having no excuses. Groundswell, who finished third in the Guineas, also had every chance. It might be worth having a look outside of those two, considering the Guineas was their grand final.

The promising John Sargent-trained Brandenburg hasn’t put a hoof wrong in six starts, with a win and five placings and heads south with a different form line. Provided he handles the anti-clockwise racing, he can feature in the finish.

Race 4 at 1:40pm – $300,000 Group 3 Hotham Stakes (2500m)
Probably the hardest race of the day to preview considering we don’t know the final make-up. For reference, the winner gets a start in the Melbourne Cup, but at the time of writing (Thursday afternoon), some horses that were guaranteed a start in the Cup were still in this event.

One horse that I’m sure will be running is Downdraft from the Joseph O’Brien yard. He was a bit one-paced in the Moonee Valley Cup when first-up here, but it was a sit-sprint type of race which didn’t really suit him. John Allen will have more options at Flemington and he’s a winning chance for the OTI Racing team.

Race 5 at 2:20pm – $1 million Group 1 Empire Rose Stakes (1600m)
My bet of the day is New Zealand mare Melody Belle. I’ve been longing to see her come to Australia. She won the New Zealand Triple Crown and is probably a better horse than Te Akau Shark, who ran second in the Epsom and third in the Cox Plate. Provided Melody Belle is happy and healthy in her new surroundings, she’ll be beating this lot.

The wide barrier isn’t a problem because the Belle will just relax just worse than midfield and storm home ala Winx. Bookies are happy to risk her at the moment and you’ll probably get around the $4 mark by the time they jump. That’s excellent shopping for a very good racehorse. 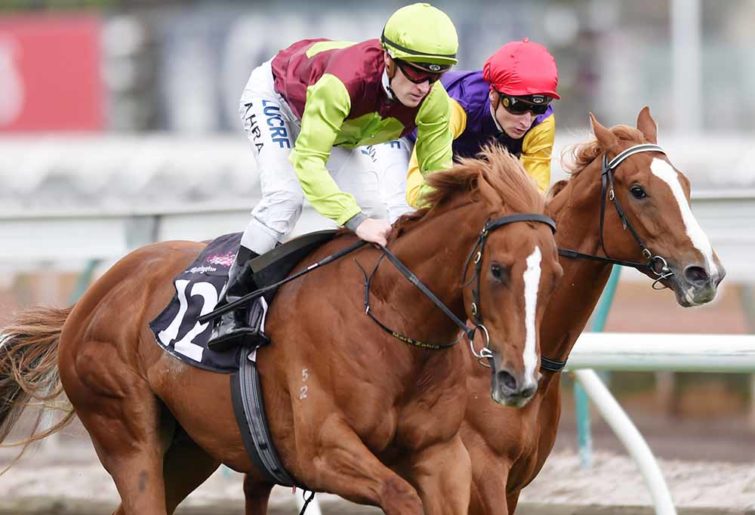 Race 6 at 3 pm – $1.5 million Group 1 Coolmore Stud Stakes (1200m)
Bivouac was the hard-luck story of the Manikato and it’s no surprise to see him start favourite in this three-year-old sprinting event. However, I’m not sure he’s a moral to win. In fact, I am always concerned about horses that keep running after their grand finals. Bivouac’s main aim was the Golden Rose, which he won, and then the Manikato.

Now he’s racing on Derby Day. Personally, I like the stablemate Microphone, who I targeted as a horse to watch this spring. In his only run this preparation, Microphone was a reasonable third at Randwick and has been given three weeks lead-up to this race.

Expect him to track Bivouac and launch on him late. I also rate Libertini as a big chance.

Race 7 at 3:45pm – $2 million Group 1 Victoria Derby (2500m)
Barring a major upset, this is an incredibly weak Derby, with only four winning chances. The cheque will go to either Shadow Hero, Soul Patch, Thought Of That or Warning. I’m leaning towards Soul Patch based on his last start win at Moonee Valley.

The Ken Keys-trained colt was super impressive in that 2040m race and the extra distance doesn’t appear to be a concern.

He lacked the brilliance in the Caulfield Guineas but looking on that run in hindsight it had Derby horse written all over it. I wouldn’t say I’m at all confident about any of those four, other than I think it’ll be one of them. Tread carefully on the punt.

Race 8 at 4:35pm – $2 million Group 1 Kennedy Cantala (1600m)
Sixteen runners will tackle this Group 1 event and 12 of them will have genuine claims. It’s hard to pick the winner, but the collect will pay well if you can. Night’s Watch was second in the Took Handicap after coming from near last and should position a little bit closer this time around.

The run before that he was competitive in weight for age company at this track and distance.

Stablemate Life Less Ordinary at big odds is also worth a nibble following two decent runs in Sydney over 2000m and back in distance here. I’d have two bets in the race, hoping for a Chris Waller victory.

Race 9 at 5:15pm – $200,000 Group 3 Furphy Sprint (1100m)
If you’re still punting at this stage of the day, then kudos. A bit of a lacklustre race to finish the meeting, but there has to be a winner. I don’t mind the look of Tofane from the Mike Moroney stable. She was a huge disappointment two runs back at Caulfield, but then bounced back immediately with a Group 3 win at Caulfield.

Jockey Dwayne Dunn will have options and could either be up on the speed or pick a horse to follow. With some cover, Tofane can finish over the top of her rivals in a pretty even field.