The Springboks have defeated England 32-12 to claim their third ever World Cup after previously winning the tournament in 1995 and 2007.

It was a dominant win by South Africa. They scrapped harder at the breakdown, they pushed harder in the scrum and their backs were ultimately able to break open England’s defence to run out 20-point victors after a tight opening hour.

Here’s how each individual player rated.

Tendai Mtawarira – 7.5
It was a big night for the man they call ‘The Beast’. He was a big part of South Africa’s early scrum dominance and put in 43 minutes of relentless hard work before being replaced.

Mbongeni Mbonambi – 4
He worked hard early at scrum time but copped a hard knee to the head in the 22nd minute which knocked him out. He failed his HIA and was not seen again.

Frans Malherbe – 7.5
He worked hard alongside his front-row partner The Beast for the first 43 minutes of the match before being replaced. Tackled hard – a solid performance.

Eben Etzebeth – 7
There was plenty of work on the ground and at the set-piece for the experienced second-rower. He made 13 tackles and five runs for 26m. Came off after 59 minutes.

Lodewyk de Jager – 4
De Jager had his game cruelly cut short when he suffered a dislocated shoulder in the 21st minute. He made one run and five tackles.

Siya Kolisi – 7.5
An inspirational knock from the skipper. He led from the front in defence with 12 tackles and no misses. He spoke beautifully after the win, a true champion of South African rugby.

Pieter-Steph du Toit – 7
He was strong at the breakdown and worked hard for his 11 tackles.

Duane Vermeulen – 8
He turned over possession twice, made eight tackles and 11 runs for 52m. Vermeulen was absolutely everywhere, including back in the pocket fielding kicks. A masterful performance.

Faf de Klerk – 8
The little scrumhalf put on an absolute clinic. He made 196m off the boot and was constantly putting opposition players under pressure. Came from the field after 76m with a huge grin on his cheeky face.

Handre Pollard – 9
He missed his first kick at goal in the fifth minute but improved significantly from there scoring 22 of his side’s 32 points off his boot. General-play kicking was superb and ran for 72m. A truly complete performance from the flyhalf.

Makazole Mapimpi – 7.5
Mapimpi scored his side’s first try in the 66th minute to put the game beyond England’s reach. Always a handful with ball in hand, running six times for 50m.

Damian de Allende – 7
With seven runs for 52m, the try-scorer from last week’s semi-final had an appetite for the tough stuff tonight. A job well done from the Springboks’ number 12.

Lukhanyo Am – 7
I would have liked to see more possession with just four runs in the match. He played a vital role in Mapimpi’s opening try with some fantastic support play and a nice catch and pass.

Cheslin Kolbe – 8
He missed the semi-final against Wales with an ankle injury but returned with a bang in the final. Kolbe ooked dangerous every time he touched the ball and scored a magnificent match-sealing solo try in the 74th minute. 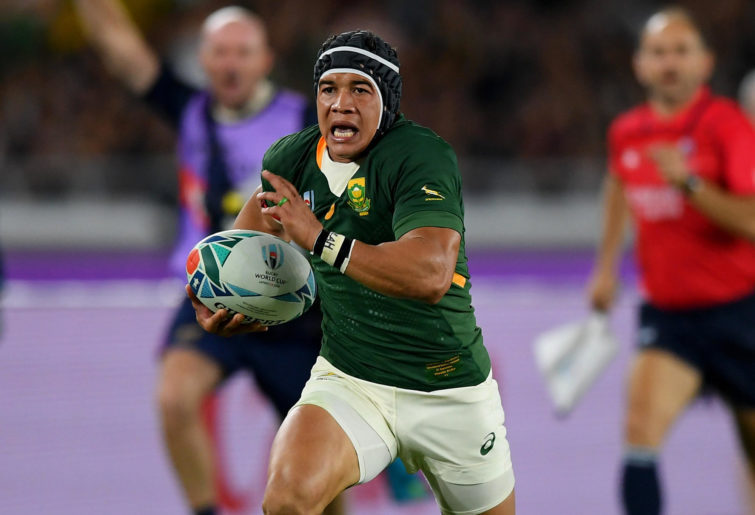 Willie le Roux – 7
Basically mistake-free at the back, making just one error. Would’ve liked to inject himself in the attack more often. Good game overall.

Malcolm Marx – 7
He came on in the 21st minute to replace Mbonambi after he was knocked out. Made ten tough tackles. Knocked the ball loose that led directly to the Kolber try in the 74th minute.

Steven Kitshoff – 7.5
It must be an absolute nightmare to scrummage against this giant redheaded man. Came on in the 43rd minute with partner in crime Vincent Koch and took South Africa’s scrum to another level from that moment onwards.

Vincent Koch – 7.5
He helped provide the extra intensity required to take the Springboks’ scrum to a new level in the second half.

RG Snyman – 5
He came on in the 59th minute and didn’t have much of a chance to get into the game. Made three tackles and missed one.

Franco Mostert – 7.5
An absolute workhorse in defence after replacing the injured de Jager in the 21st minute. Topped the tackle count with 16 and not a single miss.

Francois Louw – 4
Louw came on with 17 minutes to go and didn’t get into the game much. Made three tackles.

Herschel Jantjies – 3
He came on in the 76th minute. Minimal involvement for the replacement scrumhalf.

Francois Steyn – 4
Steyn entered the fray in the 67th minute. Kicked once but had no other significant impact on the game.

There you have it, Roarers. Let us know how you think all the South African players fared individually in the comments below.

Italy’s Six Nations clash against England in Rome next Saturday has been postponed due to the coronavirus outbreak.

Eddie Jones is one of the great coaches and greatest rugby strategists of the last 20 years.

This fine historic and vintage conveyance can be viewed by appointment at 200 Whitton Road, Twickenham, Middlesex TW2 7BA.