For most first-class cricketers, taking 9-42 or scoring 208 unbeaten runs in a match would be the best performance of their career.

Yet, quite incredibly, 20-year-old bowling all-rounder Cameron Green already has achieved both of those feats after just nine matches for WA.

Green stunned Queensland in the Shield this week as he made 87* and 121* at the Gabba. What’s more is that WA were in crisis mode when Green arrived at the crease in both innings.

They were 6-160 in the first dig and 7-53 in the second. So this wasn’t a case of Green making cheap runs after WA’s top seven had worn out the Queensland attack, instead he saved his side from potential disaster in both innings.

This is the same prodigy who, as a 17-year-old, made a remarkable Shield debut, taking 7-80 against Tasmania. Green then followed that up, in his fifth Shield match, by tearing Tasmania apart with match figures of 9-42.

Last month I flagged Green as one of the players to watch in this Shield season, highlighting that his significant batting talent was yet to be unleashed at state level.

Now he has showcased that batting ability in spectacular fashion. As a red-ball cricketer, in particular, Green’s potential is jaw-dropping. To date he has taken 28 wickets at 21 in first-class cricket to go with 376 runs at 38.

Very, very few players in modern history have made this dominant a start to their Shield careers at such a young age. 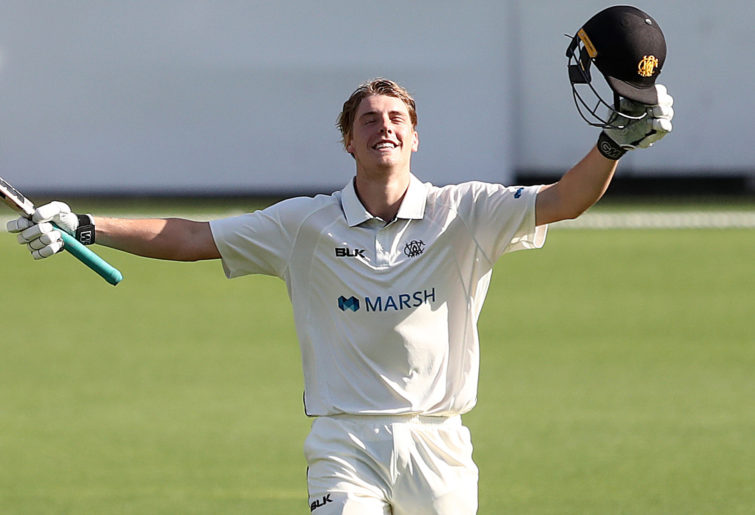 Green is the most gifted all-rounder to emerge from the Australian domestic scene since Shane Watson was carving up the Shield as a teenager some 19 years ago.

Given the Australian selection panel’s fondness for all-rounders, it will be fascinating to see whether Green is rushed into the national set-up or allowed to mature, as he should be. That may well depend on which aspect of his game comes to the fore over the remainder of this summer.

Australian coach Justin Langer yesterday joked about Green: “Can we slide him in the (Test) top four?”. Langer was the coach of WA when Green made his Shield debut so he’s well aware of his ability.

With the ball Green’s attributes are obvious. He is accurate, swings the ball consistently and quite late, and earns steepling bounce due to his 200-centimetre frame. In style and size he is most similar to current Australian star Josh Hazlewood and former Test gun Stuart Clark.

With the blade, meanwhile, he is a powerful striker who is also prepared to graft for runs. In the first innings against Queensland this week Green cautiously played himself in. His first 20 runs came off 52 balls. Operating like a composed specialist batsman, he respected the good balls and pounced on loose offerings. In the second innings Green was more expansive in his strokeplay and was especially aggressive against leg spinner Mitchell Swepson.

His massive reach made it hard for Swepson to find the correct length. Green alternated between stretching forward to drive Swepson or, when the spinner changed his length, rocking back to cut and pull.

As you would imagine for such a huge man, Green has ferocious power in his strokes. Yet the shots which stood out most across both innings were a series of perfectly timed drives down the ground from the quicks – just leaning on the ball rather than thumping it.

Green bats in the top order for Subiaco-Floreat in WA Premier Cricket, where he has made 632 runs at 63 in the past two seasons. He is more than just a bowler who can bat. Green is a genuine all-rounder.

Such players don’t come around very often. Whether he can deliver on this promise, only time will tell – but there is no question he is a truly phenomenal talent.