Lionel Messi and his club have so dominated the European football landscape for over a decade that the idea of either not existing at the pinnacle of the sport was unthinkable.

Then this season happened. The sorry state of Barcelona was exemplified by their performance against Slavia Prague this week in the Champions League.

If you merely examined the statistics from the game, it would appear that it was a routine Barcelona performance: they had double the amount of shots than their opponents, they played more passes and had a higher passing accuracy, they dominated possession, having 63 per cent of the ball. Yet none of this was apparent on the pitch.

Ernesto Valverde’s version of Barcelona is a pale imitation of the glorious attacking side of 2013-2016 under Luis Enrique and their iconic, all-conquering team crafted by Pep Guardiola from 2008-2012. The dominance in statistics may remain, the sheer presence of the cathedral-like stadium and the famous shirt is still there, but there’s also now an overarching emptiness.

Against Slavia they were disjointed and clumsy in possession and vulnerable on the counter-attack. Valverde started with an experimental front three of Lionel Messi, Antoine Griezmann and Ousmane Dembele – partly enforced by the absence of Luis Suarez – and rarely did they click.

The mercurial Dembele is one of the most satisfying wingers of his generation, able to seamlessly glide past defenders at will but his end product is wholly frustrating. There’s an emptiness.

New arrival Griezmann looks nervous whenever he plays since his transfer from Atletico Madrid: his immense work rate both in defence and attack has remained, instilled by his previous coach Diego Simeone, but he’s found no spark in front of goal and no connection with his teammates. There’s an emptiness.

In defence, Gerard Pique suffered a lot of blame for the unexpected away loss to Levante last weekend and again he was awkward in the challenge and unsure in his positioning. There’s an emptiness.

It was only Messi who ever looked like creating something. His lung-bursting run from his won half that ended with him cracking the upright of the crossbar lit up the quiet first half. He also had strong chances to win it in the following 45 that the impressive Ondrej Kolar stopped in the Slavia goal.

It was only the Argentine master’s singular moments of ingenuity and skill that seemed capable of winning the game for Barcelona and this is the problem.

Messi has become bigger than the club. His form last season, when he finished with 36 goals in 34 La Liga games, was the only reason Barcelona ended up champions.

If Liverpool hadn’t produced that incredible semi-final comeback and Messi had managed to drag his side to a Champions League title win as well, it would have been perhaps the greatest individual triumph of a single player over a whole campaign.

It allowed Valverde to escape the closer scrutiny that is now catching up to him.

There’s an emptiness underlying Messi too, and it comes in his lack of relationship with his manager. Valverde’s tactics for too long have been to let his best player sort things out on the pitch. Barcelona began 2019/20 with their worst start in 25 years but since Messi returned from injury, he’s plundered five goals in just six league games.

They sit atop both La Liga and their Champions League group but it’s not enough going forward. It’s unclear if Messi will be able to create lightning twice and carry his side until May again.

The problem of Messi, then, is both a present and future one. Barcelona operate in defensive transitions a man down – their captain is a spectator, trotting around the opposition’s half awaiting the next turnover.

Messi is now 32 and has had to physically adapt his game accordingly. He is also the only player who has earned the right to perform in such a way, given his profound ability to dictate the outcome of a match when he has the ball at his feet.

A stronger coach would have enacted tactics to appease this but Valverde seems incapable of that. The normally unflappable Sergio Busquets has often been overrun in central midfield, particularly when he plays with the youthfully exuberant and talented Arthur and Frenkie de Jong alongside him.

Right back Nelson Semedo receives no help tracking runners on his side of the pitch, exposing him consistently. This problem is exacerbated when Suarez partners Messi in attack when both wait. No wonder Griezmann has had to be so relentless helping his new side out from the left.

However, Barcelona’s future is where the real trouble may lie. As he is bigger than the club, Messi’s contract stipulates that he can leave for free at the end of every season, if he so wishes. He clearly deeply cares for the club and that has perhaps kept him in Spain as long as he has.

It was Barcelona who took him from his homeland and gave him his career. But he is in the twilight of his career now, not playing in a vintage side and he knows it. The Messi-less future could be coming sooner than his club are prepared for.

A similar effect to what happened to Manchester United after the retirement of Sir Alex Ferguson could be envisaged. When their manager for over two decades departed in 2013, the club spent vast sums of money on superstar players who never found cohesion on the pitch and went through numerous high-profile managers who couldn’t control the Old Trafford job.

When one person is so woven into the fabric of a club and its culture – as both Messi and Ferguson have been – the entire stitching can swiftly come undone.

The right manager will have to be appointed. Replacements for the ageing Suarez and Pique will have to be found. There are traces of hope in Frenkie de Jong, a generational midfielder who embodies the spirit of Johann Cruyff, and the emergence of academy product Ansu Fati, barely over 16 but showcasing electric ability that belies his youth.

They are, for now, too few though. Barcelona has always been a romanticised club – more than a club – but something needs to change to reclaim this.

Pep Guardiola and Sergio Busquets are known to many as two of the greatest defensive midfielders to ever grace the beautiful game.

Barcelona have a historic timeline of Dutch footballers that dates back to 1973 when Johan Cruyff signed for the iconic Catalan club. 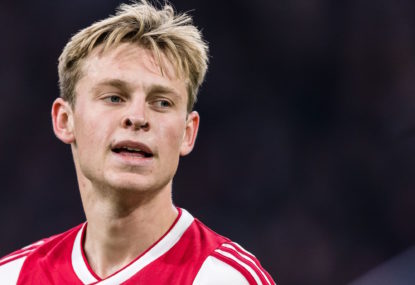 Liverpool have beaten Barcelona 4-0 to overturn a three-goal deficit and reach the Champions League final 4-3 on aggregate.