Maddie Penna stars in the WBBL

It was just another ordinary day for Sydney teenager Maddie Penna.

But the 19-year-old from Bankstown was at university on a Wednesday afternoon where she is studying exercise sport science when she received a surprise phone call from her ACT Meteors captain Erin Osbourne to ask if she was interested in playing for the Melbourne Stars in WBBL05.

Her response was, “What, sorry?”

As a result of a couple of injuries to key players in the Stars line-up including Ange Reakes and Alana King, there was an opportunity for Penna to join the squad as an injury replacement. With very little time to decide whether university could accommodate her cricket commitments and if work would give her the time off she needed, Penna made the decision to head to Melbourne for WBBL05.

That decision has certainly paid off both for Penna and the Stars.

This positive form is a fitting reward for a teenager who has certainly faced some challenges getting to this point. 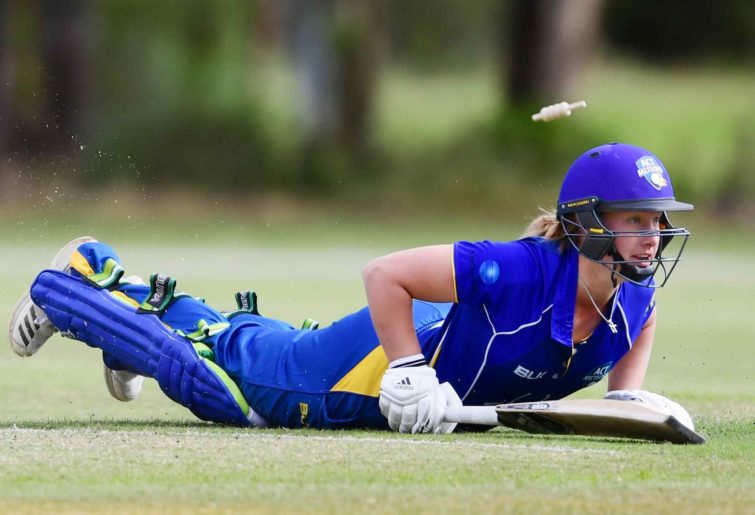 It was almost 12 months ago that Penna had serious knee surgery. Not for the first time though.

When Penna was nine years old she was diagnosed with osteochondritis dissecans, which is effectively loose bone under her kneecap. She had surgery when she was nine, but when the surgery didn’t assist, she was told to focus on her strength and conditioning.

That’s what Penna has done and her commitment to her rehabilitation has only made her want a career in cricket that much more.

“For ten years I have been trying to do as much strength and conditioning as I can to get myself on the cricket pitch. Stretch, ice, repeat.

“This is something I had to do as an individual to make sure I could play and it’s something I have learnt to enjoy doing. That made it easy for me to decide whether I wanted to continue doing it even though it was difficult and something that not many others were doing.

“As a teenager I was doing the little extra things, but it made me want it more. The more I trained and the more I conditioned myself to play, the more I wanted to do it even though it was a tough couple of months recently trying to get as a fit and strong as I could in a short space of time so I could be ready for the start of the season.”

Those injuries have had more than just a physical impact though. They also pushed Penna to try a different type of bowling, which explains her unusual action.

“I didn’t start bowling leg spin, I was a medium-pacer and obviously because of my knee and the impact of landing on that front foot, I got told to try spin. That action was literally the first thing that came out of my hand when I started bowling, so I kept at it,” says Penna.

“Lisa Sthalekar probably doesn’t remember, it was a long time ago. I think I was 13 or 14 in the under-15s academy for NSW and it was a time when my knee was particularly bad. I was bowling medium-pacers and Lisa was at one of our training and hooked me up with one of the physios and encouraged me to take up spin.

“I started mainly as a batter, but as I progressed it was something I was interested in because I was someone that wanted to be in all aspects of the game including batting, fielding and bowling, so any opportunity to have the ball in my hand, I definitely jumped at.”

Heading into this round of the WBBL the Stars find themselves on the bottom of the ladder, with just the one win. However, this hasn’t stunted the team’s confidence.

“We still think we can make the top four. We have had a couple of rough starts and it was good to get the win against the Scorchers,” says Penna.

“We are a fiery bunch and we are working really hard. Since I have got here, the women are so keen to get a few wins on the board. We’re there, we’re really close and I think the harder we work and the more we recognise that we are good enough, we will continue to get better.”

And no matter what happens for the rest of this season, with talent like Maddie Penna, Tess Flintoff and Annabel Sutherland coming through, the future certainly looks bright for the Stars.