The best and worst of the All Blacks in 2019

The All Blacks set out to become the first team to win three consecutive World Cups this year.

Their international season culminated with the big dance in Japan, and included a mixture of performances that eventually saw them lose to England in the semi-final and having to be content with third place.

Instead of going into the details of every game they played in 2019, I have come up with some awards based on all internationals in 2019. So here goes.

Worst performance – World Cup semi-final versus England, lost 19-7
England used a great game plan nullifying New Zealand’s attacking strengths. England constantly got over the gain line and dominated the collision/breakdown area. The All Blacks were not able spark their attack and were regularly driven back in the tackle or bungled into touch when they tried to go wide.

The 47-26 loss to the Wallabies in Perth was a close second, but a knockout game in the World Cup has superior weighting.

Best performance – World Cup quarter-final versus Ireland, won 46-16
Avenging the 18-9 loss in Dublin last year, the All Blacks put on an exceptional display in the quarter-final. Ireland had no answer for the varied game approach of pick and goes in the pack, along with beating the Irish rush defence with cross-kicks to the unmarked wings. The speed of the All Blacks’ attack saw them score seven tries to Ireland’s two.

The bounce-back 36-0 win over Australia was very close, but once again the weighting of a World Cup knockout game wins out.

Player with most to prove in 2020 – Rieko Ioane
At the beginning of 2019, most people would have expected Ioane to feature and be a star at the World Cup. He was dropped for George Bridge in the Bledisloe decider at Eden Park. He played against lowly ranked Canada and Namibia in pool play, and only regained a starting berth against a tier-one opposition in the bronze medal playoff versus Wales. With 24 tries in 28 Tests, Ioane is a world-class finisher. 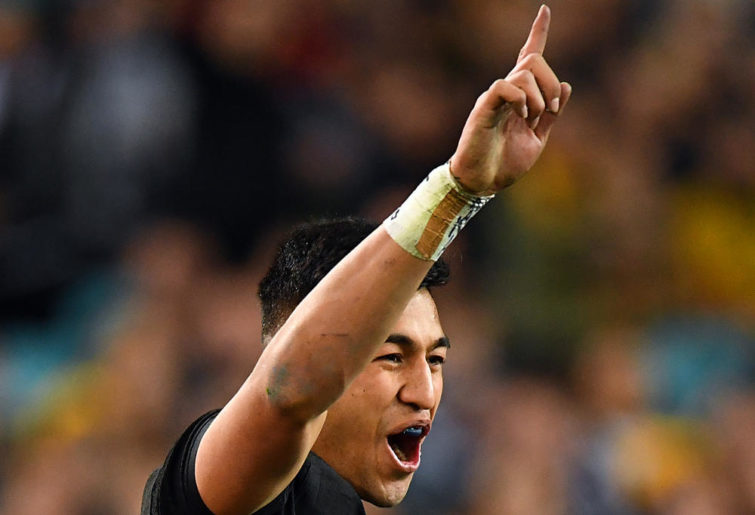 In 2020 he will need to up his work rate and look to have a high involvement in every game he plays. This will include coming off his wing more often to use his 102kg frame and get more touches on the ball. Ioane in the long term should also consider a move away from his home franchise the Blues. This will get him out of his comfort zone and experience a new environment, which will develop him further as a rugby player and person.

Most improved player – Patrick Tuipulotu
After a near non-existent showing against Argentina in the first Test of the year, Tuipulotu got better with the more minutes he played. His best game in a black jersey was against Australia at Eden Park. His stinging defence and improved work rate was a key contributor to the All Blacks victory that night.

Steven Hansen attributed his effort with a change in energy levels: “It’s interesting because we changed [his] energy intake prior to this game because he’s been running out of energy.”

He showed more signs of improvement against Tonga and held his own in the opening pool game against South Africa coming off the bench.

The Blues captain has an opportunity to apply pressure on veteran lock duo Sam Whitelock and Brodie Retallick next year with a good Super Rugby season. Whitelock is playing his club rugby in Japan before returning to the All Blacks fold. Retallick is on a whole season sabbatical for 2020, also playing in Japan.

Best forward – Ardie Savea
The World Rugby player of the year nominee has been in impeccable form for the last 14 months. The Hurricanes loosie took his game to a high level and consistently was one of the All Blacks best players in every game. His acceleration and leg drive on attack always made him a hard man to tackle. On defence, Savea made 97 per cent of his tackles and won 20 turnovers in all internationals this year.

Savea showed great versatility playing in all three loose forward positions this year. Even though he started at blindside for the majority of 2019, he was often taking the ball off the base of the scrum using his speed and power to get over the gain line.

Whoever coaches the All Blacks next year seriously needs to consider starting Savea at number eight. Playing at the back of the scrum will allow him to feature significantly in all aspects of the game.

Best back – Anton Lienert-Brown
Season 2019 was a breakout year for the midfielder. Whether in the 12 or 13 jersey we saw regular quality from ALB. At the World Cup he averaged just over five beaten defenders per game with his jinking running style. He made a break to set up Scott Barrett’s try against South Africa. He managed to start the crucial knockout stage games ahead of veterans Ryan Crotty and Sonny Bill Williams.

Most valuable player – Ardie Savea
He has already been mentioned in this article. As the only All Black to be nominated for World Rugby’s top gong, there is no debate. A good rest in the summer and we hope to see him back continuing his superlative form in 2020.

Overall grade: B minus
Not winning the William Webb Ellis trophy will have been a huge blow for the men in black. With a lot of experimenting early on in the Rugby Championship there were speed bumps from time to time such as the loss in Perth and the Springboks stealing a 16-all draw in Wellington. This was mixed with two impressive displays against the Wallabies in Auckland and Ireland in the quarter-final.

Losing their number one world ranking is a rare position to be in. They can take solace that the current world champions South Africa did not beat them in two attempts this year.