I chose Rhyce Shaw as coach as he did a good job during his tenure in 2019.

I chose Todd Goldstein as one of the two co-captains as he’s a good character and a good role model for the other players to look up to. Ben Cunnington, on the other hand, leads by example, through his unwavering attack on the footy and the quality player he is, and deserves to be a co-captain.

Oscar McDonald is an underrated defender who is an important part of the Melbourne team. Jake Lever would be an important part of this combined team in the full back position. Neville Jetta can prove he is one of the top small defenders in the competition. Michael Hibberd can provide plenty of run off the half back flank. Robbie Tarrant is clearly North Melbourne’s best tall defender and is most suited to the centre half back role. Jamie Macmillan would flourish playing on a half back flank.

The midfielders were relatively easy to pick as Ed Langdon is a quality player who’s most suited to playing on a wing and Ben Cunnington is one of the most underrated midfielders in the competition. Trent Dumont finished fourth in the North Melbourne best and fairest in 2019.

Shaun Higgins could prove hard to curtail playing on a half forward flank. Nick Larkey is a quality centre half forward who will start to get recognition as he has a lot of ability. Jayden Hunt had a reasonable 2019, but I expect him to improve in 2020 after finishing tenth in this year’s Melbourne best and fairest. Kayne Turner needs to kick more goals and will do so in 2020. He also has the ability to push up the ground, as he averaged 18.6 possessions per game in 2019. Ben Brown is an automatic selection at full forward. Jack Ziebell should play up forward as he is a hard match up if he plays in the forward pocket.

Todd Goldstein is a good ruckman and a great leader, therefore he’s is a walk-up start. James Harmes averaged 24.5 disposals a game, playing every game in 2019, and I expect him to relish more midfield time in 2020. Clayton Oliver finished equal first in the Melbourne best and fairest for a reason. He averaged 30 disposals and is probably going to improve even more in 2020.

Adam Tomlinson has the capability to play wherever he is needed for the team at any given time. Jed Anderson has the ability to play every game next season as he doesn’t need a lot of the ball to make an impact. Angus Brayshaw didn’t have his best season in 2019 but still managed to finish eighth in the best and fairest. Jack Viney should be an impact player as he needs to have more of an influence on the game. Reducing Viney’s game time would help him do that. 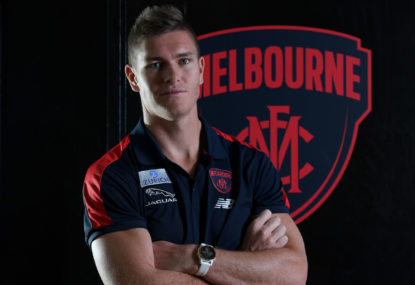