Fireworks on the fifth: What the Saracens crisis means for the global game

“That’s life, that’s what people say. You’re ridin’ high in April, shot down in May.” Those famous lyrics from an old Frank Sinatra song are an especially apt summary of global rugby events during the last week.

But it didn’t take one month, it only took three days for the euphoria surrounding South Africa’s World Cup victory to be shot down by a story which potentially has even bigger long-term implications for professional rugby.

On a momentous fifth of November – appropriately enough, given the anniversary of Guy Fawkes’ attempt to blow up the Houses of Parliament – Saracens were docked 35 points in their domestic league and fined a colossal £5.36 million for breaching salary cap regulations.

This was a ground-breaking sanction, the culmination of a seven-month probe by Premiership Rugby, reported in detail by Daily Mail journalist Laura Lambert in the UK.

Saracens have been found guilty (pending appeal) of breaking the rules of the cap by establishing ‘co-investments’ between owner Nigel Wray and some of their leading players as a principle of payment outside salary.

Players including Owen Farrell, Maro Itoje and the Vunipola brothers have all entered into business partnerships with Wray, and the financial dividends are substantial. For example, Vunprop (an investment property company co-owned by the brothers and Wray) has a published value of £1.54m in assets at the last round of accounting.

The extent of Saracens’ fine suggests that they were assessed to be a massive £1.78m over the current cap limit of £7m, even though that allows for two free marquee players and offers bonuses for the production of young, England-qualified talent.

Why is a salary cap so important? Typically, it been introduced in American and Australian sports in order to control the wage structure, ensure future financial sustainability, and guarantee equal opportunities for all of the teams participating in the competition.

In the NFL, the salary cap was introduced in 1994. In the 15 years before it came into force, the Super Bowl was shared among only six franchises. In the 15 years following, that total had already doubled to 12 different winning clubs.

In the NRL, the Melbourne Storm were stripped of two premierships, three minor premierships, and barred from earning any competition points in 2010 because of illegal payments to players.

Saracens have enjoyed a run of success similar to the Storm, winning four of the last five Premiership titles while adding a further three victories in the European Champions Cup. They have been able to hold on to their best players in the process, while adding quality depth and at the top end.

They can now boast more than half of a 2017 British and Irish Lions Test XV playing for them: the Vunipola brothers (although Billy had to withdraw from that tour due to injury), Jamie George, Maro Itoje and George Kruis up front; Owen Farrell, Liam Williams and, this season, Elliott Daly behind.

They have three tighthead props who all started for their country at the 2019 World Cup – Juan Figallo for Argentina, Vincent Koch for South Africa and Titi Lamositele for the USA. They can field no less than four players who have at various times played fullback at international level: Williams, Daly, Sean Maitland (Scotland) and Alex Goode (England).

Compare that to the Exeter Chiefs, who were forced to sell Pumas’ wing Santiago Cordero – a player they dearly wanted to keep – in order to accommodate the arrival of Scotland fullback Stuart Hogg in the off-season. 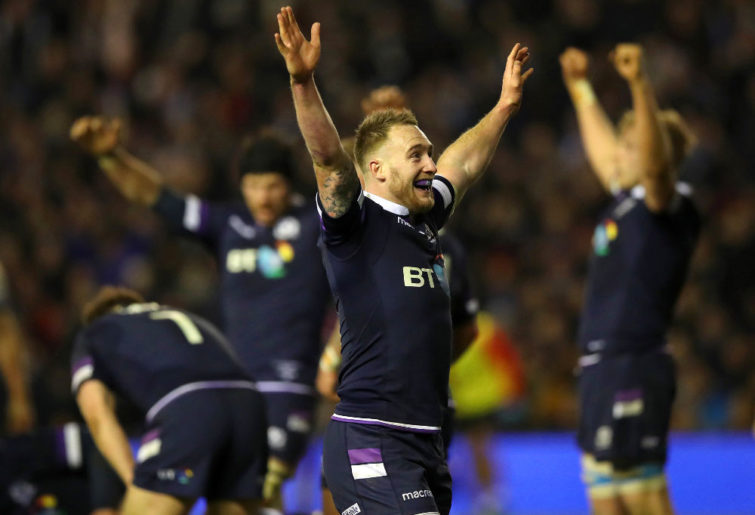 Exeter have remained within their means and respected the intent behind the salary cap rules. They were the only English Premiership club to post a profit in the 2017-18 season. Saracens posted a loss of £2.8m and were carrying a huge £48m debt burden, at least until it was written off by their wealthy benefactors.

In the long term, the first model is content to work alongside the primacy of the international game, the second aspires to become strong enough to eventually replace it. The superannuated club game envisaged by Saracens enjoys a limitless, uncontrolled ability to purchase the best players from all around the world.

There, in a nutshell, lies the most dangerous threat to rugby in South Africa, Australia and New Zealand. It is the soccer future translated to rugby, dominated by a handful of elite clubs.

“Tony’s [Rowe, Exeter chairman] concern, and probably the rest of the Premiership’s concern, is that if that is the first response to what has happened [Saracens’ appeal], what they are saying is that they are not abiding by the fundamental basic principles of the salary cap.

“We’re supposed to be working within the salary cap to create a level of fairness and competition. That’s what we have signed up to and agreed to.

“There can’t be many people within rugby circles who don’t think this is just the elephant in the room finally coming out into the open instead of being in the corner.”

As both Rowe and Baxter have emphasised, this is in no way the fault of the Saracens’ players or coaching staff, who have done so much to create the ideal environment for player development – for both young home-grown talent, and salvage projects like Will Skelton. 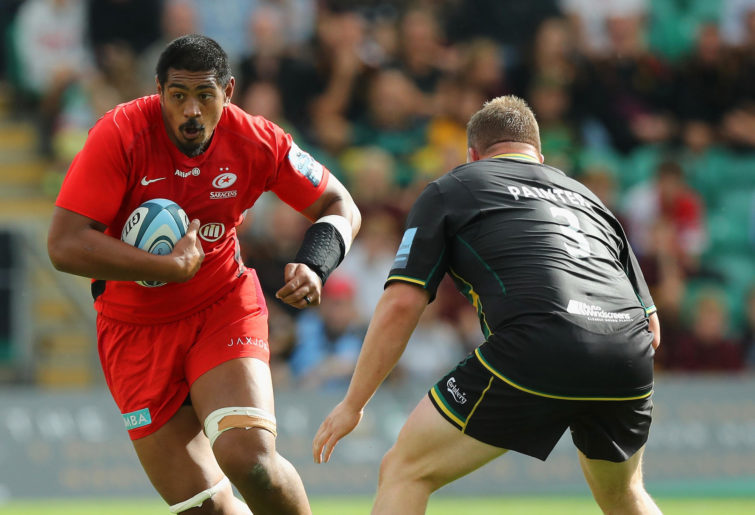 Will Skelton is a markedly improved player since joining Saracens. (Photo by David Rogers/Getty Images)

Another of Saracens’ second-row stars, Maro Itoje, may not quite have fulfilled Eddie Jones’ prophecy that he would be the best lock in the world by the time the World Cup was played, but he came mighty close – particularly in England’s semi-final win over the All Blacks.

Itoje best represents Saracens’ cussed, indomitable spirit on the field. Nowhere does that manifest more than in his contribution on defence, the Sarries’ touchstone.

Against New Zealand, Itoje made more tackles than any other player bar number 7 Sam Underhill, and he had five turnovers in the game. He won one ball against the throw at lineout time, an area where England were touted to be weak. If he stayed on the ground, he was still a menace when the All Blacks tried to set up the drive:

In the first example, Itoje starts away from the throw, as part of the second layer of defence. His role is to select the right moment to commit to the fringe, rather than sticking his head in blindly. He patiently waits for his second-row partner, Courtney Lawes, to swim through onto the carrier, before spotting the right moment to attack the ball and rob Codie Taylor.

In the second instance, he starts much closer to the point of the drive. Here the defender with the widest wingspan will typically stay up top and try to swim through the blocking onto the ball-carrier at the back.

Itoje first reaches across with his right arm, trying to locate Taylor: 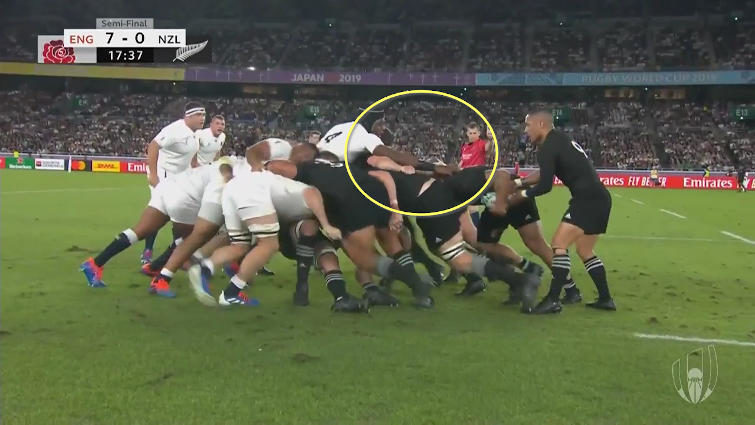 At the moment when the maul begins to compress and lose its depth, he seizes his chance to swing the left arm through, lock up the ball and boulder Aaron Smith out of the road for good measure.

Itoje’s knack of locating the ball proved equally effective on the kick-chase, one of Saracens’ primary methods of ‘offensive defence’:

He probably ranks alongside Joe Launchbury as one of two best big men in the English game in his work over the tackle ball, and there is no chance of Smith removing him one-on-one.

It is Itoje’s range in defence which truly marks him out as one of the most complete modern second-rowers in the game. One of the key performance indicators by which professional defence is measured is the ability of the tight five to make tackles on both other forwards and backs with equal proficiency.

In the game against New Zealand, England had two locks in that mould in the shape of Itoje and Lawes:

The All Blacks have just won prime turnover ball near their own 22, and despite the position deep in their own end, this is a scenario they would be expecting to turn into seven points: 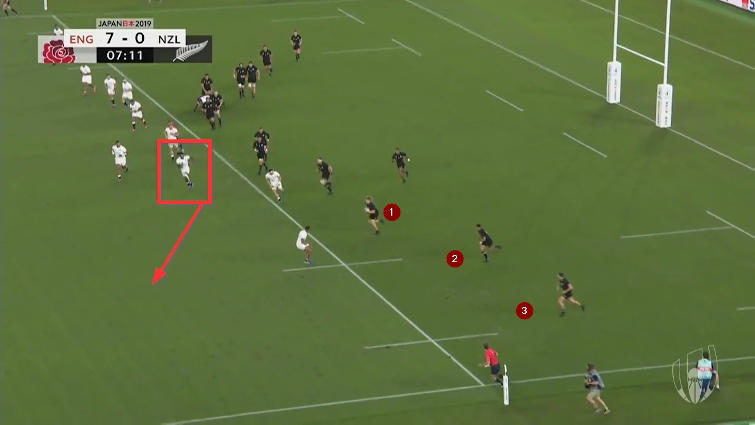 When Jack Goodhue receives the ball, he has two backs outside him in space (Richie Mo’unga and George Bridge), with only two England forwards (Lawes and Sam Underhill) trying to cover that space from the inside.

Lawes not only overtakes Underhill to scrag Goodhue, he then gets up off the floor to tackle Bridge near touch too. That was not the end of the story, because New Zealand still had potential mismatches in midfield when the ball came back the other way: 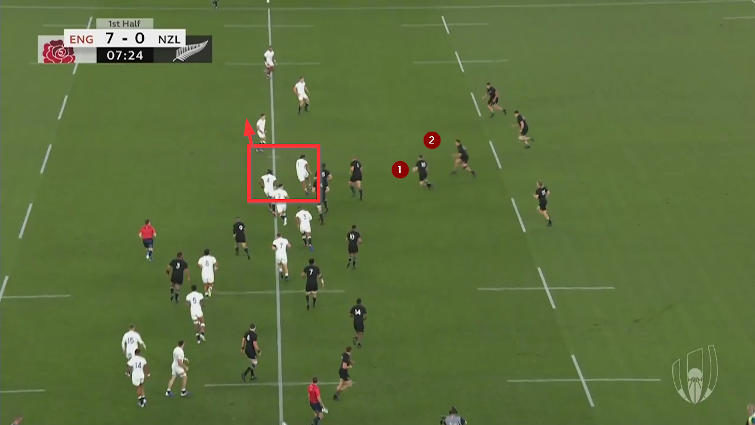 Somehow they manage it, with Itoje putting a good lick on the All Blacks centre as he surges through the line.

The Saracens’ second-rower is an 80-minute player too. As the match entered its final phase, he was still making his tackles, first filling from the inside out on Mo’unga:

Tackling forwards and backs, with equal proficiency, until the very end of the game. That is certainly the Saracens way on the field, even if it is far more oblique off it.

Summary
Four years ago, Saracens and Bath came to a private agreement with Premiership Rugby for alleged breaches of the salary cap. This time around, the multiple champions from north London may not be so lucky. This time, it appears Premiership Rugby may have the courage of its convictions.

If it can follow through on its decision to dock points and levy a hefty fine, it will have taken an important step for the game as a whole. It will build a rampart against those who would like to turn professional rugby into an undernourished version of soccer’s English Premier League or European Champions League: an unregulated mess which encourages modest clubs to overreach financially, and the elite few to replace the international game with their own league of mercenaries.

The salary cap, properly policed, can help control the wage structure in England, ensure financial sustainability in the future, and create equal competitions in which a wider spread of clubs can hope to achieve success.

The well-being of global brands like the Silver Fern, Springbok and Wallaby – and the primacy of the international game – can only be sustained by supporting the domestic football which fuels them, not by asset-stripping.

For that hope, we should look symbolically more towards Exeter than Saracens. If the good of the global game is to be the main priority, let it be the Chiefs who are going to change that tune, and be back on top in the Premiership final, next June.