In my last article I opined on the number of new top 100 goal scorers that could make the list at the ten longest-established clubs by the end of the 2020 season by a simple formula of 60 goals for a gun forward and 30 goals for a handy forward in 20 games, and came up with the stat that up to 45 players could join the top 100 lists in 2020.

The number that does make it will be well below that prediction and most clubs will be lucky to feature two new elite members by season’s end.

Let’s look at the current top 100 goal scorers at these leading clubs and – using much tighter criteria – try to establish their movement up the ranks of the revered champions.

The formula this time will still be to estimate 20 games but to apply the average number of goals per game kicked by the player over his whole distinguished career. Whilst both statistics (20 games and average goals) are both rubbery, they provide the best prediction of where the player will finish on the list at the end of the year, and who he will be sitting between at the end of the year top 100 champions’ dinner.

Starting with the AFL list, the leading current player Lance ‘Buddy’ Franklin, who currently sits on 944 goals, could be expected to kick 63 for the season and therefore take his total to 1007, becoming the sixth player to score above 1,000 goals and moving from the left of Richmond’s Jack Titus to sit between him and Gary Ablett Senior at the end of a group of legendary goal scorers: Tony Lockett, Gordon Coventry, Jason Dunstall, Ted Wade and Ablett.

The next three leading current goalkickers (Jack Riewoldt, Josh Kennedy and Eddie Betts) will all remain in the 600+ goal bracket, with the gap between Kennedy and Riewoldt narrowing slightly.

Riewoldt will move up three places to between Bob Pratt (24th) and Jack Moriarty while Kennedy will finish just below Moriarty, but ahead of Alistair Lynch and David Neitz, as will Eddie Betts.

Tom Hawkins will finish just shy of 600 goals and the other six players will all be in the 400+ goal category, with Taylor ‘Tex’ Walker passing Gary Ablett and Jeremy Cameron – with the second-highest goal average among the current top 100 players – closing in and moving from 96th on the list to 73rd. The three expected newbies will all pass 400 goals and Luke Breust could climb as high as 88th from just outside the top 100 at present. 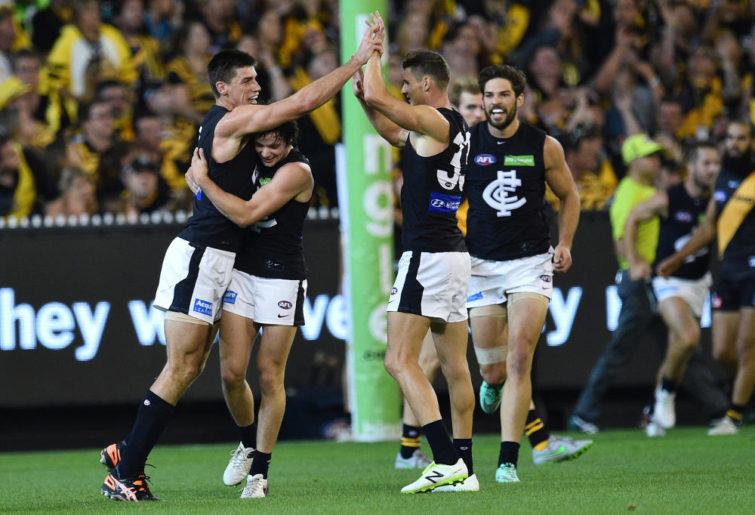 At Collingwood, none of the current six top 100 goal scorers will pass 200 goals, but Josh Thomas is expected to become a centurion and Will Hoskin-Elliott, Mason Cox, Brody Mihocek and Jaidyn Stephenson could all have goal tallies in the 90s and thus become members of Collingwood’s top 100 all-time goal scorers.

Essendon also have six current top 100 goal scorers, and the main interest will be in the comeback of Joe Daniher. At his current goal average (1.81 – can he do better?) for 20 games he would move up six places and be slotted between above ex-Ringwood 70s player Robin Close and behind Close’s teammate bespectacled full forward Geoff Blethyn who – like Close – played in the losing 1968 grand final side in his first year.

The main interest among the other established clubs will be how high Tim Membrey can rise up the St Kilda goal-scoring ladder and can Tom Lynch make it into Richmond’s top 100 goal scorers in two years at the club?