As I sat in my lounge room on Saturday evening – watching in utter disbelief as the perennial underdogs of international rugby league, the Papua New Guinea Kumuls, sealed their ground-breaking victory over the British tourists with a try to back-rower Nixon Putt – I picked up my thesaurus to search for words to adequately describe the return of the Great Britain Rugby League Lions in 2019.

The word lacklustre comes to mind. What better way to describe a side that, despite boasting the likes of John Bateman, Josh Hodgson, Gareth Widdop, Jonny Lomax and Jermaine McGillvary, could only manage to score five tries across four matches?

What about awful? Useless? A resounding failure? I think I’m getting closer.

How about embarrassing? That certainly describes the loss to Tonga, although the embarrassment was mitigated somewhat by the fact that the Kangaroos also lost to Tonga the following week.

Here’s the thing, though. This tour was already all of the above before the Papua New Guinea game. What I was searching for was a word to describe the difference between losing to the likes of Tonga and New Zealand, and losing to Papua New Guinea.

And that’s when it hit me: pathetic! This Great Britain Lions team is pathetic.

It’s a harsh word, absolutely no doubt about it. But the immediate aftermath of a loss to the Kumuls is certainly no time to mince words. They’re pathetic. No two ways about it.

As an Australian, I love it. Few things in sport bring me the joy that a pathetic British and/or English team does.

I still recall with great jubilation both the 2006-07 and the 2013-14 Ashes series in which Australia wiped the floor with England 5-0.

While the English rugby union side got their act together somewhat at this year’s World Cup in Japan, wasn’t it a thing of beauty to see them bundled out in the group stage at their home tournament in 2015?

And last but certainly not least, who can forget the time that the Socceroos defeated a full-strength England side 3-1 in 2003, back when the Socceroos didn’t qualify for World Cups regularly?

I’ll put my hand up and admit that the game between the Kumuls and the Lions reduced me to uncontrollable fits of laughter at times. Still now, I can’t even look at the 28-10 scoreline without having a little chuckle.

But as the dust settles from this Kumul rampage in Port Moresby, the PNG players return home to their villages while the Brits hop on a plane as fast as they can with their tails between their legs, it occurs to me that this, unfortunately, is no laughing matter.

See, while international rugby league goes from strength to strength in the southern hemisphere, a weak northern hemisphere could really hold the game back. Results like this give the strong southern hemisphere teams no incentive to tour the north, while on the home front, more and more kids will pick rugby union as their code of choice over league.

The issues facing British rugby league go far beyond a couple of shock defeats and some questionable selection calls by coach Wayne Bennett. These issues go all the way to head office at the RFL. Fundamentally, what I’m talking about is attitude: more so off the field than on it, although their on-field attitude was pretty pathetic too.

The attitude towards this tour has been wrong from the get-go. Let’s start with the Anglo-centric interpretation of the current incarnation of Great Britain rugby league.

Now, I understand that rugby league is not in the position rugby union is in. Yes, it would be lovely if Great Britain could be a true coming-together of the best rugby league players from all four home nations.

Unfortunately, this isn’t the case, nor is it likely to be for the foreseeable future. As per usual, most of the British players will come from northern England. If that’s the way it is, then so be it – there’s nothing wrong with that. 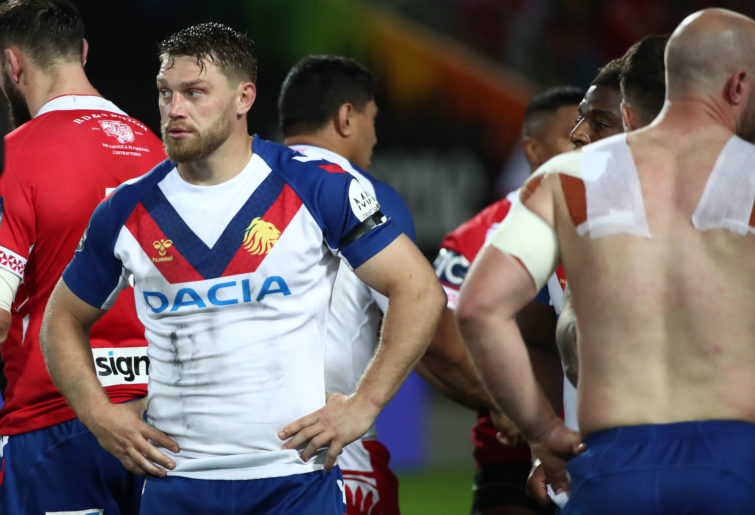 When a player like St Helens winger Regan Grace (Welsh born and bred) comes out in June and says he wants to be picked for Great Britain on merit as opposed to just being a “token Welsh player”, I think to myself “good on you Regan, that’s exactly the sort of attitude that’ll get you picked”.

Fast forward to October when the team’s about to be picked and define the term merit.

Would 20 tries (fourth most in the Super League), over 2600 metres run, a Challenge Cup final appearance and a premiership win merit a starting berth? Surely it would merit at least a squad position, especially given the pre-tour unavailability of experienced wingers like Josh Charnley and former Golden Boot winner Tommy Makinson.

Nope! All of that wouldn’t even merit consideration. Not according to coach Wayne Bennett, who reportedly didn’t even consider Grace due to the fact that he’s not part of the England system.

How’s that for an insult to the idea of Great Britain?

How about Bennett saying after the second Kiwis’ loss, “We’re back to where we were in 2016 when I first came in as coach”.

It annoyed me somewhat when Brad Fittler and Andrew Johns on their Freddy and the Eighth podcast incorrectly referred to Great Britain as England (several times, in fact). But then it occurred to me that if even the coach can’t differentiate between the two, what hope do Freddy and Joey have?!

Speaking of insulting Great Britain, I wonder how the British fans feel about having to cheer on the reigning Man of Steel Jackson Hastings and five-eighth/emergency winger Blake Austin – two dinky-di, true blue, fair dinkum Englishmen from Wollongong and Western Sydney respectively.

Let me tell you something. They may both have English grandparents. But Blake Austin has never had tea and scones a day in his life, and Jackson Hastings is about as English as a VB and a Four’n Twenty pie on the hill at Leichhardt Oval.

Don’t get me wrong. I’m not knocking the heritage aspect of rugby league international eligibility – I love what it’s done for the Pacific Nations. But these two players have been around for quite some time in the NRL, and could have already played for England on several occasions, yet haven’t. Now they’re both playing in the Super League and after just one season they’re representing Great Britain? It’s all a bit too convenient for my liking.

And before you ask, no, I’m not including Lachlan Coote in this because at least he’s already played for Scotland before this tour.

So, the coach is an Aussie. He can’t decide if he’s coaching England, Great Britain, both or neither. He’s picking players with extremely loose ties to the British Isles and encouraging them to nail down starting spots for England while playing for Great Britain.

This is a team completely bereft of any form of identity whatsoever. Is it any wonder they were as pathetic as they were?

Coming into this tour, I thought it was borderline disgraceful that the Kangaroos weren’t willing to play against the Lions on their first tour in 12 years.

Coming off the Kumuls’ loss, though, I think the British players should thank their lucky stars they didn’t have to play Australia.

I bet the Kangaroos wish they’d played them though. Putting 60 on Great Britain would have been the perfect way for them to redeem their embarrassing loss to Tonga a few weeks ago!