Israel Folau and the inexplicable public interest in sportspeople's opinions

So seriously Christian were they that at her birthday party, there was no music, and we all spent the whole night sitting solemnly, eating chips and wondering which one of us her grandfather would declare to be tonight’s sacrifice.

Anyway, in the mid ’90s, during a period of intense and devastating bushfire activity across New South Wales, this Christian friend of mine declared that the reason the fires were ravaging the state was the NSW government’s failure to criminalise homosexuality.

To this we responded with laughter and mockery. None of us attempted any reasoned argument against her declaration, because it was so self-evidently batshit insane that we saw no need to engage with it on any level other than “what an idiot”.

Which brings me, naturally, to Israel Folau. Folau has made a statement pretty similar to what my old sort-of-friend said more than 20 years ago: he claims the current bushfire emergency is due to the government’s sanctioning of same-sex marriage and abortion.

Essentially, the cross-code champ reckons, God didn’t like what Australia did, so he torched the joint.

Now, what else can you say to this but “what an idiot”? Not just for believing that, but for thinking it doesn’t make this “God” you love so much look like a total bastard? I mean, “God is burning the country because he hates gay sex” is no advertisement for God – if God and Satan were in an election campaign, the Devil would be running Izzy’s line on his attack ads.

But also, those of us who encountered people like my classmate in the past know that Folau’s take on the fires isn’t even an original one. People have been claiming disasters as the wrath of God against the wicked forever.

In fact, the guy spends most of the Old Testament inflicting various catastrophes on people whose behaviour he disapproves of, so it’s no wonder that in The Year Of Our Lord 2019, people who’ve been brought up to think that very Testament is the ancient world’s version of Hansard believe it’s still going on today.

So it’s not really any big deal that a guy who’s been indoctrinated into the tiniest hate-filled niche of a slightly larger hate-filled subsection of a moderately sized hate-filled corner of a fairly large wing of a massive global belief system is going around spouting hilariously demented lunacy. Given that, the question is: why are we paying attention? 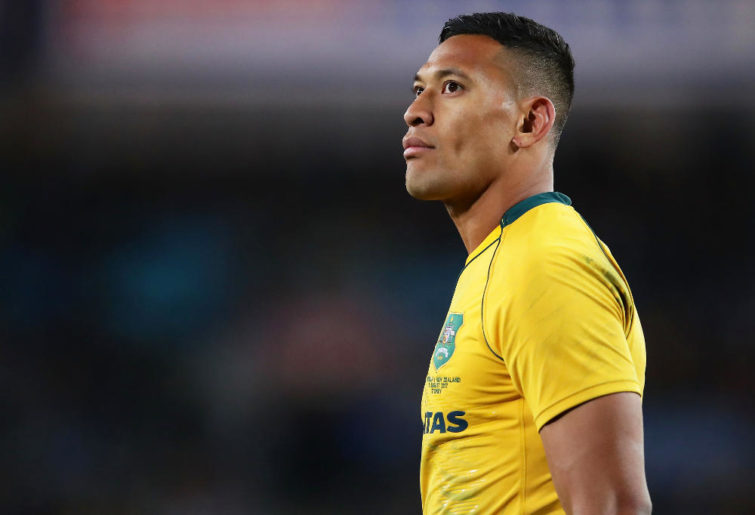 And the answer is: because this weird loon is good at footy. Really, really good at footy. Let’s not deny that Israel Folau, in the days before his big mouth and church-scrambled brain saw him banished from the field, did things that even very good footballers could only dream of doing.

But there we run into a non sequitur. Because “we are interested in his views about why God sets fire to things because he is super good at footy” is not a logically coherent sentence. It’s like saying you hired a plumber because you heard he made brilliant apple cakes: it does not follow.

So maybe we should take our explanation back a step. The reason we’re paying attention is not simply because Israel Folau is good at footy: it’s because, long ago and for reasons difficult to decipher, we decided that what sportspeople think about things outside sport is important.

It’s the same reason Margaret Court can still grab a headline by babbling something dumb about Hell, the reason NRL players rack up big Facebook numbers telling people not to vaccinate their kids, and the reason Sam Newman is still a thing. As a society, we took the adventurous step of allocating to athletes the role of expert pundit on… well, pretty much anything.

So maybe we should stop doing that?

Look, there are undoubtedly sportsmen and sportswomen with intelligent and useful contributions to make on a range of social issues. I’m just saying how about, before we treat anything they say as inherently newsworthy, we check to see whether there is any reason to listen to them besides the fact they get paid to play games?

Maybe, before we decide that an idiot saying idiotic things matters, we should ensure that we’re not only paying attention to that idiot because of their proficiency in a field completely unrelated to the idiotic things they’re saying?

If you want to know how to catch a high ball under pressure, Izzy Folau would be a great guy to go to for advice, just like Margaret Court can be of enormous help to anyone seeking to improve their forehand. But going to either of them for anything interesting on the subject of marriage equality, gay rights in general, or fire prevention makes as much sense as asking Don Bradman for his thoughts on data retention.

I mean, even when he was alive.

So, can we draw a line? Can we agree that from now on we only take sportspeople seriously when they’re talking about sport, and if we’re unlucky enough to be within earshot when they shoot off about anything else, we simply say, “what an idiot” and move on with our lives?