Trade period
The Dockers made the best of a bad situation in the trade period, managing to get good compensation for losing wingmen Brad Hill (St Kilda) and Ed Langdon (Melbourne).

After losing two-time best-and-fairest winner Lachie Neale to Brisbane last year, Hill and Langdon departing is less than ideal for a team trying to win a flag while its talismanic captain, Nat Fyfe, is still in the prime of his career.

Hill and Langdon were two of Freo’s best ball-movers, and, although the club managed to pick up Blake Acres (St Kilda) and James Aish (Collingwood) to cover those positions, I can’t see them being more than serviceable – it’s highly unlikely they’ll reach the same heights as either of the departees.

Promisingly for the club, it managed to retain all of its younger players.

Draft
The good news is that the club has a chance to really set itself up for the future with this draft.

Dockers boss Peter Bell drove a high price for Hill and Langdon and was ultimately rewarded, including securing a second prized top 10 selection from St Kilda as the centrepiece of the Hill deal. 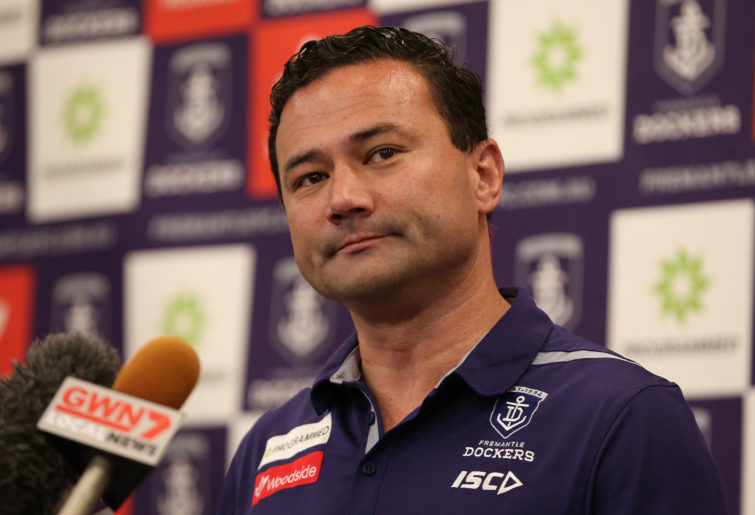 After bringing in four first-round draft picks in the last three years, plus a host of other promising talent, the Dockers are building a nice core of future stars.

They’ll be able to pair this year’s picks 7 and 10, as well as next generation academy player Liam Henry, with their 2017 top-five selections in Andrew Brayshaw and Adam Cerra.

So, who might they select? At this stage, it seems likely they’ll keep their current selections – I can’t see them being able to package those two up to move up the order.

They’ve been linked a bit to ruckman Luke Jackson, who looms as a possible top-five pick. If they packaged up 7 and 10 for 5 and a 2020 first-rounder, it might get done, but I don’t think that’s likely.

If they keep their current picks, there’s a slim chance Jackson may fall to them, but it’s looking less realistic as the days go by.

Superboot Hayden Young will also likely be gone, as may midfielder/forward Sam Flanders, although both would be steals if they got to pick 7.

Any would be a good fit for Freo – Ash would complement Darcy Tucker and their other half backs nicely, while Serong could slot into Hayden Ballantyne’s spot and make it his own.

Stephens is my favourite player in this year’s draft, and he’d be a good long-term replacement for Hill and Langdon on a wing.

At pick 10, those same players might still be available, but WA under 18 captain Deven Robertson will also come into their thinking here.

Freo doesn’t exactly need another inside mid after taking Luke Valente last year, and with Tom North and Mitch Crowden also on the list, but Robertson’s leadership skills and hometown factor set him apart from others.

The one knock on his game is his kicking – personally, I don’t think it’s that bad. It could do with a bit of polish, but he rushes his kicks because he’s always under pressure and needs to get rid of the ball, ala Patrick Dangerfield.

I’m a believer in maximising a player’s strengths rather than focusing on their weaknesses, and the rest of what Robertson brings is too good to pass up.

It looks likely a bid on Liam Henry won’t come until after pick 10, allowing the Dockers to use picks 22 and 58 to match it.

If that happens, it’s an absolute steal, he’s a silky small forward who could move into the midfield, and would likely have been a top 10 pick if not tied to Freo.

If they do retain a later pick, it’s hard to say who they might take. They could probably do with another half-forward, so someone like Josh Honey might appeal.