An ode to Jason Gillespie, the bowler’s bowler

From the first time I watched cricket I wanted to be a fast bowler.

Before T20, when I was growing up, fast bowling was the only game. Sure, most kids wanted to bat and wallop the ball, but those who were instinctively punk picked up the Red King and whirled like Courtney Walsh. I’m still proud that in my first season of cricket – under-12s – I, while only taking two wickets, sent 14 kids off the pitch with my bouncers. One poor bugger twice.

I honestly cannot comprehend the type of mind that grows up wanting to be a spin bowler. Shane Warne, I suppose. At least batsmen have grace, a type of classical beauty and form to recommend them to the eye. A spinner lumbers in, permanently in a state of fatigue. It’s different today, with Rashid Khan and Sandeep Lammichane. T20 has done more for spin bowling than Warne or Muttiah Muralidaran ever did.

The first Test series I can clearly remember was the 2000-01 series against the West Indies. I remember spending hours sitting in the kitchen watching Brian Lara on the small TV rather than on the larger one in the living room because I couldn’t bear to miss a second of that sublime hundred.

I remember that I already loved Gillespie, though I couldn’t tell you the first time I saw him bowl. I remember that he wasn’t quite as fast as he had been, but that didn’t matter. Lee can keep his pace because Gillespie could make Lara look like a schoolboy. Dizzy took 6-40 that innings, and it remains one of the greatest displays of fast bowling to ever grace the game. I never looked back.

Every time I watched him bowl I grinned maniacally. At every wicket I hollered and disturbed the neighbours. When a day’s play had ended I’d grab a ball and try to imitate his action. When our dad took my brother and me to the nets I’d bowl my Gillespie bouncers at him. Always perfectly directed between armpit and chin. I’d get in a lot of trouble for that, but I was only getting my own back.

It was a rebellion. It became my excuse for any and every misbehaviour. “I have to skip school if I’m gonna bowl like Dizzy.” I grew my hair long because his was. Going down to the nets by myself, trying to recreate the videos I watched on YouTube that week, were the only times I felt calm. When I finally strung six decent balls together after two or three hours was the only time I felt proud.

In 2004 Gillespie was Australia’s leading bowler in their famous series victory over India, claiming 20 wickets at an average of 16. 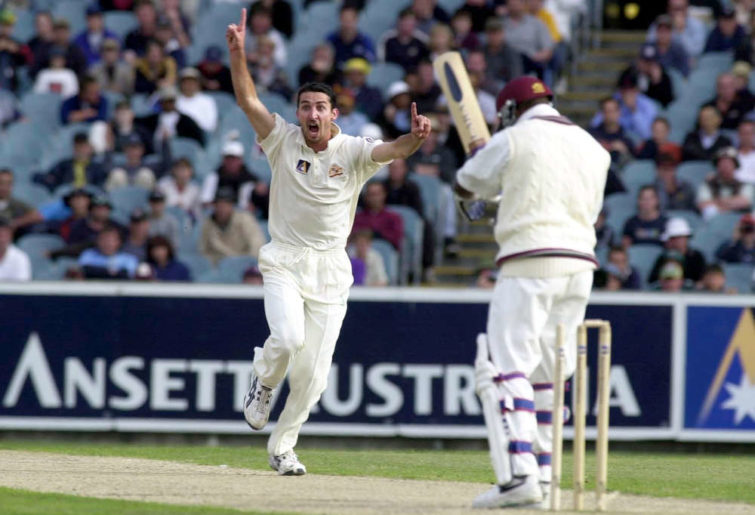 In 2005 cricket broke my heart for the first time. I know that he had a poor series against New Zealand and I know that after three matches he was averaging 100 and going for over four an over. But to this day I am a completely unfounded and irrational hater of Shaun Tait.

Tait has nothing to do with it and is a lot smarter than he’s given credit for. But he replaced Dizzy. It doesn’t matter who it was. If Pat Cummins had replaced him, I’d hate Pat Cummins. Dizzy went back to the Shield, the Pura Cup as it was known then, he was the bowler of the season and, after a haircut, went along to Bangladesh.

Like the pest he famously is, he showed up the likes of Matthew Hayden, Phil Jacques, Ponting, Mike Hussey and Michael Clarke and scored 201 not out. I watched it in an aunt’s living room. He also took the first three wickets of previous innings for figures of 3-11 along with his five wickets in the previous Test. He had as close to a perfect series as possible and never played another Test.

The more I learnt about Gillespie the more I admired him. Not the trifling things like the injuries he overcame, but the wherewithal to shorten his run-up and curtail his pace to become more durable and consistent. He was the first, and to my knowledge only, Aboriginal Australian to play Test cricket. A descendant of the Gamilaraay people.

I’m not vegan and couldn’t give a toss that cricket balls have leather on them, but good on him for sticking it to sponsors and saying what he believes is right. How many times has a head coach had a go at a team sponsor? And isn’t it a great thing that not everyone has been captured by the corporate culture of ‘elite honesty’.

He started his coaching career in Zimbabwe, working with the Mid West Rhinos. What was most significant about that period was not what he did with that side but the amount of time he spent in the club system coaching and mentoring young players who would normally never have the opportunity to work with someone with 259 Test wickets.

That said, his ability to turn underperforming sides into champions was displayed at Yorkshire. He arrived when the side was languishing near the bottom of the second division. After five years Yorkshire had won the first division twice and had been runners-up twice. They won the second division in his first season.

After Darren Lehmann resigned Gillespie would have been the perfect appointment. He has proven his ability to reset a culture while dramatically improving results at the same time. I hope Cricket Australia have been smart enough to earmark him as Justin Langer’s successor.

But secretly I hope one day Gillespie is in the coach’s seat for the West Indies. My favourite cricketer with my favourite team. Jason Gillespie, the bowler’s bowler, paired with Jason Holder, the captain’s captain.