The Roar's A-League expert tips and predictions: Round 7

Don’t mention Round 6. Last weekend’s A-League action had something of a Basil Fawlty feeling about it by Sunday night.

Only two second half goals to Sydney FC saw three members of the panel trouble the scorers at all with Tom Williamson holding up well under some recent pressure and managing two from four for the weekend. He kept pace with the ever reliable crowd and things are very tight as we enter Round 7.

This week, the competition returns to five matches for the round and looks incredibly difficult to pick in what is shaping as a tricky season to read.

Be sure to enter your tips into the sheet below and have a say as the important and interactive voice of the crowd. Good luck!

The Wanderers look like they’ll be tough to beat at home this season while Dean Bouzanis failed to cover himself in glory in Redcliffe. Can the Wanderers hold Jamie Maclaren out? Will Bouzanis keep a clean sheet? Nope.

What goes up, must come down? Brisbane Roar should by rights be flying when they cross the ditch to take on the Phoenix, but the reality is this is about the trickiest fixture imaginable for Robbie Fowler’s side.

The Phoenix will have to win a game at some point, and they’ve got a glorious opportunity here. Phoenix the favourites but I’ll tip a draw.

On all the evidence available, Adelaide United are a better side than Melbourne Victory this season. They’ll know Marco Kurz will be fired up to get a result against his former club, but unfortunately for Victory fans the squad Kurz has assembled is absolute cactus.

Gertjan Verbeek has got the Reds purring and they’ll put Victory to the sword here.

Tony Popovic often resembles an Easter Island statue, but you just know there’s a fixture that gets under his skin. This is it.

Popovic will have had the whiteboard out all week devising a strategy to see off the Sky Blues, but the reality is that both of these teams are laden with talent. They should cancel each other out in this grand final rematch.

Sorry Mariners fans, but your back four looks like it couldn’t keep out water in a desert and Jordan Murray has so far belied the notion that the only thing NPL players need is a chance.

Western United will get pegged back from time to time this season, but it won’t be in Gosford. Expect the visitors to claim all three points with relative ease on the road.

Stuart Thomas
City, Wellington, Adelaide, Sydney, Central Coast
Friday night at Bankwest should be a belter. First and third on the ladder meet in a clash between Melbourne City’s potent offence and a Wanderers’ tight defence that has allowed just four goals so far this season.

City for me in this one. Sky and light blue look to be the inform colours early on and the Wanderers need more time to reach their full potential.

The floodgates finally opened for Brisbane last weekend against City, although was it enough to convince A-League fans that the Roar have truly turned the corner?

Wellington will be fresh after a week off and may well take the points at home if Brisbane cannot recapture the energy they found in the second half last weekend.

Melbourne Victory have yet to build faith in tipsters and lost a 1-0 lead against Sydney last week in a performance that raised further questions about their ability to create chances through their attacking midfield. Without Ola Toivonen I’m not sure where they would be.

Adelaide continue to improve and will get the points on their home deck.

Perth are yet to fire and a week off may have been exactly what they needed to reset and prepare for the acid test against Sydney FC this Saturday. The Sky Blues look ominous, effective and confident.

Perth can match them in full flight but how long will it take for them to produce their form of last season? Sydney by a single goal.

Both losers last weekend, three points for either the Mariners or Western United will keep their season’s on track and confidence levels high.

In what appears to be the toughest of matches to pick, home ground advantage has swung things in the Central Coast’s favour in my view. United look to be starting to work into the grind after an emotional start to the season and the Mariners are far improved.

I have little confidence in this tip but I am sticking with my gut in what could be a very dour affair.

Week 7 kicks off with a tipster’s nightmare between Western Sydney and Melbourne City. City will be smarting from their loss against Brisbane, although they looked sharp for much of the game.

Jamie Maclaren was in smoking form and had decent service from Javier Cabrera. The Wanderers might struggle coming off the bye and I’m tipping a hard fought win to City.

Brisbane Roar coach Robbie Fowler produced two miracles last week. He managed to coax a hat-trick out of striker Roy O’Donovan, and brought much needed precipitation to Southern Queensland. It was good to see big Roy fired up and I’m sure he’ll maintain the rage across the Tasman.

Wellington have been better than their paltry one competition point but I’m tipping the born again Roar to get the win.

Adelaide have quietly moved up the table on the back of three straight wins. Coach Gertjan Verbeek has the Reds running hot, Ben Halloran being the latest to show great form.

Ola Toivonen aside, Melbourne Victory are looking a shadow of last year’s team, and I can’t see them getting anything out of this game. Adelaide to win the Bunnings chair derby.

Perth Glory and Sydney FC looks like it could be an arm wrestle, just like the grand final. Coming off the bye, Perth could be a bit sluggish but Sydney’s long trip might even things out. Draw. 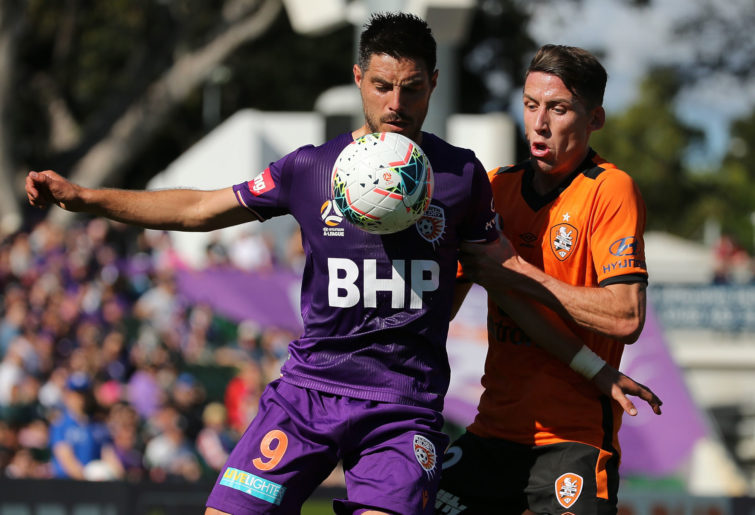 Bruno Fornaroli of the Glory (Photo by Paul Kane/Getty Images)

I’d like to think Central Coast Mariners can put in a big effort against Western United but two 1-3 losses in a row is ordinary form.

But for a great goalkeeping display by Newcastle’s Glen Moss, Western United might have taken something out of last week’s match. Mark Rudan will have been busy during the week and should get his aces firing again. United too strong.

As I sweat myself through these predictions, I’m currently stationary in Melbourne CBD traffic, fitting I think.

Erick Mombaerts will be fuming after City threw last week’s game into the furnace and collapsed after having a two goal lead, twice. They’ll be bouncing back with ferocity, with Maclaren still firing. City to win here, 2-0.

Cars beeping, abuse being hurled my way, keep your head down Thomas, the tow truck is coming soon.

The Phoenix is a creature that spontaneously combusts, only to rise from its ashes born anew. As I prepare myself for my own combustion, I’m faced with a vision in the form of Gary Hooper’s smiling face.

The Roar showed resilience, class and poise in their win over City last week, it was a win that ignites a season, however, their logo doesn’t feature a creature that’s synonymous with fire, so it’s a no from me.

For the majority of you who don’t know me, I’m half Scottish, which means like many Scots, I get sunburnt watching fireworks, and to say I’m red as a tomato right now, probably wouldn’t be doing my skin colour justice. Wait a second… red, that’s it!

Reds to win the Original Rivalry.

Melbourne Victory are well and truly the third team in Melbourne right now, they were uninspired, lethargic and devoid of any spark against Sydney. Adelaide are making a serious push with three wins on the trot and show no signs of simmering down.

Perth versus Sydney is going to be the game of the round, mark my words.

Perth have had a frustrating campaign so far, with the bar set so high they have struggled under the weight of expectations, however, Tony Popovic is a great manager, and he will absolutely stoke Perth’s flames. Sydney are doing typical Sydney things, scoring goals, winning games, steaming along as favourites yet again.

I seriously think Perth will win this one, and it’s not because they’ve got a sun on their logo.

As the chaos of my day peters out, and the tow truck appears on the horizon, it’s come just in time for the last game of the round.

With a glamorous view of warmth, Central Coast’s logo paints a wave crashing, it inspires images of a nice day at the beach and somewhere I’d love to have spent today, instead of cooped up in a tiny overheating car.

Western United dropped the ball against Central Coast’s F3 rivals last week, and on the road they’re going to be scrambling to pick it back up.

Mariners to torch Western United in a fiery encounter, 3-1.

As I wrap up, I’d like to urge readers to pay a visit to the RBB’s social media pages, and more specifically to their gofundme site raising money for the bushfire victims.

I’ve been satirical regarding my own encounter with the warm conditions, but I cannot overstate the seriousness of what is happening in Northern NSW, and how we as a football community can band together and really make a difference.