Don’t give Giteau’s Law the boot

It’s all about rebuilding and renewal at Rugby Australia at the minute, but there’s an item that’s due for review that must be retained.

RA must keep the so-called Giteau Law – the rule stipulating that only those players who have played 60 or more Tests for the Wallabies and have served seven years in Super Rugby in Australia can be picked for the Wallabies from overseas clubs.

Michael Cheika ensured it was introduced so he could get Matt Giteau – as well as Drew Mitchell – back for the 2015 World Cup.

It’s copped a fair bit of flak over the years, including recently as fans digest the Aussies’ World Cup failure in Japan and plot ways to fix the mess of the last four years.

Dave Rennie is in as Wallabies coach – excellent recruitment – and Cameron Clyne is out as chairman in March.

A much more distressing loss is one of the Wallabies’ best, Samu Kerevi, who is now ineligible for international duty as he’s clocked up 33 Tests and is contracted to Suntory in Japan.

Earlier in the week, as Rennie was unveiled as the new coach, RA’s director of rugby Scott Johnson said Giteau’s Law would be appraised as part of a full review into the World Cup campaign.

It worked for the Boks, so RA should get with the times, right?

Of course it’s disappointing that Kerevi has taken off at the age of 26, with many good years ahead. He puts bums on seats at Ballymore for the Queensland Reds and is a class act in a gold jersey too. 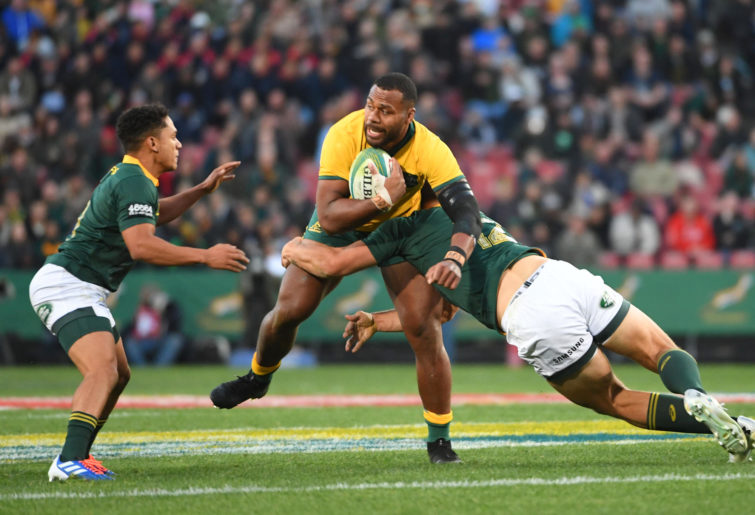 Rory Arnold and Adam Coleman are two others heading overseas while well below the 60-Test threshold.

But abolishing Giteau’s Law is not part of the solution to spark up Australian rugby. Ensuring there’s still a huge drive for the best young talent to fight for a national jersey by proving their quality at Super Rugby level is crucial. The draw of Wallabies selection for home-bound players shouldn’t be underestimated.

There’s strong financial pull from Japan and Europe for young players to bank big bucks, but Test rugby – and the lure to pull on a Wallabies jersey – is still strong too. Rich clubs provide the bulk of a player’s salary but the appeal of Test rugby remains bright.

In reality, one would like to believe that any player would need to prove himself in Australia for at least two or three seasons before getting on the radar of Wallabies coaches anyway. It wouldn’t be enough for a youngster carving up at Saracens, Stade Francais or Suntory to be picked for the Wallabies unless he’s got a solid Super Rugby CV to go with it.

But it’s wise to make it black and white and have a clear policy in place. Perhaps if anything, there is scope to lighten the restriction of 60 Tests and seven seasons of Super Rugby, and reduce the limit closer to 40 Tests and four Super Rugby seasons.

Thankfully, it sounds as if Johnson isn’t a fan of ditching Giteau’s Law.

“The reality is, though, we’ve got a younger group of players that is going to come through that is going to help us change the landscape of Australian rugby so for the large part I’d like them here,” he said on Wednesday.

Whenever there’s failure, there’s demand for change. But Rugby Australia should realise Giteau’s Law has served a purpose and is a powerful factor for any player contemplating a move abroad.

Let’s look at a drop in the threshold as a compromise, but to follow the Springboks and drop the rule altogether isn’t the way to go.