Hopes of a first success since 2003 were dashed in Madrid after Kyrgios failed a late fitness test.

It forced Millman, who had been a spectator for the whole tournament, to take on Vasik Pospisil who won the opening singles rubber 7-6 (9-7) 6-4.

Although Alex de Minaur fought back to beat Denis Shapovalov 3-6 6-3 7-5, the Canadian duo then backed up from their singles matches to beat John Peers and Jordan Thompson in straight sets in the doubles.

Kyrgios had been in sensational form in Australia’s opening two ties against Colombia and Belgium, winning both his singles rubbers in fine style, sending down 38 aces in four sets of tennis in the process.

The combustible Canberran had also kept his cool throughout both matches and earlier in the week was labelled the ultimate team man by Hewitt after being invited back into the team following an 18-month hiatus. 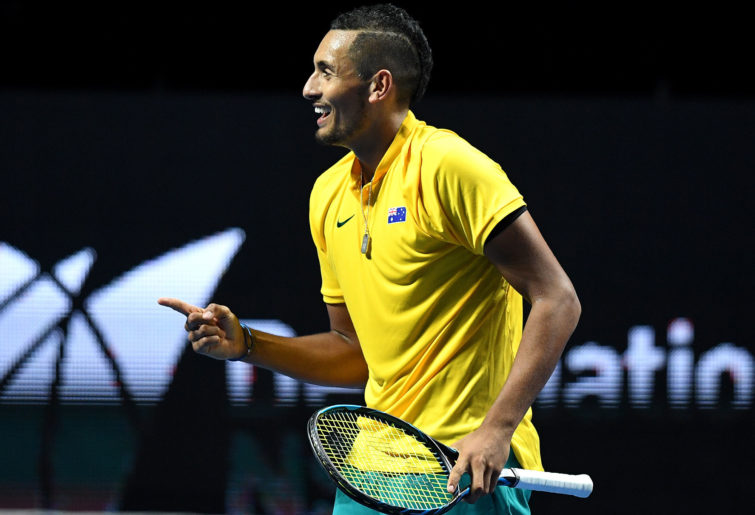 But just an hour before the quarter-final got underway at the Caja Magica, the bombshell news emerged that Kyrgios would not play and speculation that he had been dropped grew when a Tennis Australia official stated that he had simply “not been nominated”.

“He got injured last night,” Hewitt said after the tie.

“We didn’t really have a choice. He couldn’t play.

“Earlier today we found out. So Johnny had to step up to the plate.

“He (Kyrgios) had a collarbone injury. I think it was similar to what he had at Laver Cup time. That’s just the way the cards fell.

“It’s been pretty tough I guess trotting back out the last three nights as well. To Johnny’s credit, he went out there and left it all out on the court.”

Hewitt, who has been a critic of the new-look competition was upset that his side had been forced to play all of their matches in the late sessions this week with all of their group matches finishing well after midnight.

Canada in comparison had played their two group matches in the morning session and then had a day off before the quarter-final.

“The scheduling is a big problem,” he said.

“You know, for us to have had to play these three nights in a row, it’s not ideal.

“I understand it’s the first time and you’re going to have hiccups and you’ve got to learn from it. But there’s been a lot of small problems, that’s for sure.”

Pospisil admitted he was shocked to discover he was facing Millman and admitted it threw his game plan out of the window.

“I was expecting to play Nick,” Pospisil said.

“I was expecting to play him until the hour before the match, I think it was one hour before when the captains nominate the line-up.

“I was like, ‘Oh well, OK, that’s surprising’. And then I just, you know, digested it for five minutes and then went back to getting my racquets ready.

“You obviously start to change my mentality in terms of how I was going to play the match a little bit because they’re two very different players, polar opposites.”