What happened? A-League Round 7

The main point of conversation around the A-League is how well Jamie Maclaren is playing.

Maclaren could play in any league in the world, based on his current form. Another player who is in sensational form is Riley McGree. Mcgree is second in the golden boot race, despite being a midfielder.

The story of Round 7 was goals, goals and more goals. The best game was the first game. That was entertaining for the viewer from start to finish.

Wellington Phoenix got their first win, while the signs are worrying for Perth Glory and Melbourne Victory.

Now let’s talk about the football that was played.

Top two coaches
Erick Mombaerts (Melbourne City)
Melbourne City played in what was the game of the round. The football played was at a high tempo and felt like it was a game that could have been played anywhere in the world. Melbourne City had a comeback win over Western Sydney Wanderers, mainly thanks to Jamie Maclaren, Josh Brillante and Harrison Delbridge, who have all flourished under the guidance of Mombaerts.

Gertjan Verbeek (Adelaide United)
Adelaide United’s performance was outstanding, they just kept on attacking. They played an expansive, entertaining style of football. But Verbeek is in second, due to the fact that the performance of Adelaide United’s opposition wasn’t up to standard, as Melbourne Victory’s display was deplorable.

Coaches under the pump
The A-League is so tough and tight that it’s difficult to say that any coaches are under pressure, however two coaches that I rate highly in Marco Kurz and Tony Popovic are under the pump, particularly based on their respective teams’ Round 7 performances. Melbourne Victory and Perth Glory weren’t at the races, with both teams losing 3-1. Interestingly the two teams square off in what is a must-win game for both next Friday night at AAMI Park. 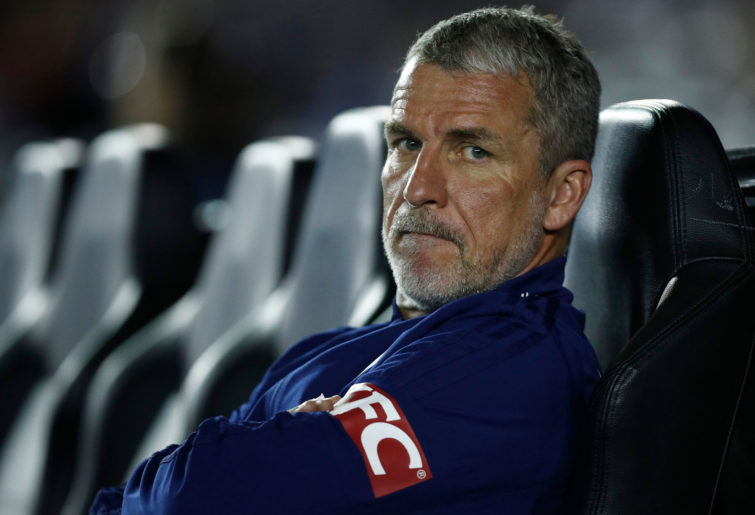 Western Sydney Wanderers versus Melbourne City
One for the ages
Magic moment: Josh Brillante had a shot well saved by Daniel Lopar near the midway point of the first half. Eric Mombaerts stayed calm and collected despite his team losing by a goal on the scoreboard. Daniel Georgievski had a shot from distance well saved by Dean Bouzanis late in the first half. Javier Cabrera forced Daniel Lopar into a super save with a shot from distance in the early stages of the second half. Lachie Wales provided the assist for who else but Jamie Maclaren to give Melbourne City a 3-2 win.

Who stood out from the pack? Take a guess! Maclaren finished with two goals and an assist. An honourable mention for Kwame Yeboah, who finished with a brace.

What went right? Kwame Yeboah scored the all-important first goal of the game very early on. They say goals change games, so it forced Melbourne City to attack. Jamie Maclaren provided the assist for Josh Brillante who did brilliantly to give them the lead 2-1. The entire game was great to watch from start to finish! The atmosphere matched the great football that was played.

What went wrong? Melbourne City were wasteful in possession in the first half, despite having the majority of it. The penalty awarded to Melbourne City in the second half was quite difficult to understand, which inevitably led to Jamie Maclaren equalising for Melbourne City.

Wellington Phoenix versus Brisbane Roar
Phoenix claim three points, finally
Magic moments: Steven Taylor did well to block a shot from Jordan Courtney-Perkins in the first part of the opening half. Alex Rufer had a shot well saved by Max Crocombe near the end of the first half. Ulises Davila scored Wellington Phoenix’s second goal, early in the second half.

Who stood out from the pack? Alex Rufer helped the Wellington Phoenix get all three points with an outstanding performance.

What went right? Steven Taylor scored his first goal of the season with a clinical header, early in the first half. Stefan Mauk scored the opening goal for the Brisbane Roar that gave them some hope of getting something out of the game. In the end, Wellington Phoenix deserved the three points as they controlled the balance of play, winning 2-1.

What went wrong? Jay O’Shea missed a wonderful opportunity to score in the first half, near the midway point. Roy O’Donovan missed a chance to equalise in the 36th minute. Josh Sotirio messed up a chance that should have made the score 3-0 in Wellington Phoenix’s favour, fairly early in the second half. The Brisbane Roar only had two shots on target for the entire game. Last weekend’s comeback win against Melbourne City may prove to an aberration as their performance in Round 7 against Wellington Phoenix wasn’t up to standard.

Adelaide United versus Melbourne Victory
Reds outplay disappointing Victory
Magic moments: George Blackwood had a header brilliantly saved by Lawrence Thomas. Corey Brown had a shot well stopped by Paul Izzo. Lawrence Thomas kept the deficit at one goal when he saved a header by George Blackwood close to half time. Robbie Kruse played an exquisite cross that was finished clinically by Ola Toivonen to make the score 1-all in the second half.

Who stood out from the pack? Riley McGree scored a brace.

What went right? Michael Maria scored his first goal for Adelaide United to make the score 2-1 in Adelaide’s favour. Adelaide United played good football and were by far the better team. They thoroughly deserved their 3-1 win.

What went wrong? Kristian Opseth missed an opportunity to score early in the game, so did George Blackwood. James Troisi butchered a chance to open the scoring in the 17th minute. Melbourne Victory’s defending was poor for the first call they conceded, which was scored by Riley McGree. Nikola Mileusnic should have made the score 2-nil shortly before half time. Melbourne Victory were fortunate to trail by only one goal at half time.

Perth Glory versus Sydney FC
Sky Blues defeat woeful Glory
Magic moments: Alex Wilkinson blocked two shots in succession from Bruno Fornaroli, towards the end of the first half. Kosta Barbarouses scored a sensational goal relatively early in the second half to make the score 2-1 in Sydney FC’s favour. Sydney FC made it 3-1 shortly after thanks to some exquisite lead up work from Rhyan Grant and Kosta Barbarouses, which was finished off by Milos Ninkovic.

Who stood out from the pack? Kosta Barbarouses was instrumental in Sydney FC claiming all three points.

What went right? Bruno Fornaroli became the fastest player to 50 A-League goals. The correct decision was made by the VAR on a number of occasions. Sydney FC deserved the three points as they were clinical in the final third.

What went wrong? Bruno Fornaroli squandered a chance to score early in the game. Diego Castro gave away a silly penalty early in the game for pulling Milos Ninkovic’s shirt. Adam Le Fondre scored a goal from the penalty spot. Chris Ikonomidis missed an opportunity to equalise at the midway point of the first half. Sydney FC wouldn’t be happy with their first half, despite the score being level at 1-all. Bruno Fornaroli was caught offside in the second half and the goal was disallowed by VAR, rightfully so, which the Perth Glory would be disappointed with, as he should have stayed onside.

Central Coast Mariners versus Western United
Mariners impress as Western United have first loss away from home
Magic moments: Dario Jertec had a superb shot from distance well saved by Mark Birighitti shortly after the midway point of the first half. Ziggy Gordon cleared a header from Andrew Durante off the line, just following that Birighitti save from Jertec. Alessandro Diamanti had a sensational free kick somehow saved by Birighitti close to half time. Birighitti made another great save from a header by Besart Berisha in the second half. Fillip Kurto made a fantastic save from a shot by Jack Clisby, also in the second half.

Who stood out from the pack? Mark Birighitti was a pivotal part of the Central Coast Mariners claiming an upset against Western United.

What went wrong? The football that was played wasn’t of the best standard in the first half, in particular in the final third for both teams. The Central Coast Mariners were too tentative from a tactical perspective. They were too defensive. Panagiotis Kone butchered a chance to score near the half time interval, which should have made the score 1-nil in Western United’s favour. Besart Berisha missed an open goal, somehow, straight after the Central Coast Mariners broke the deadlock. For the second game in a row Western United failed to score.

Newcastle Jets had the bye in Round 7.