Victoria Country trio set to be snapped up in AFL Draft

Talented young footballers around Australia will find out what club they’ll be at next season when their names get called out in the AFL Draft this evening.

For Caleb Serong, Brodie Kemp and Thomson Dow, having spent the last two seasons away from home boarding and playing for Geelong Grammar School in the Associated Public Schools of Victoria (APS) competition, it’s likely that the trio will find themselves separated at different AFL clubs.

However, while this might be a reality for them, the top 30 prospects feel more than ready for a move anywhere if it falls that way on draft night. The trio are used to not seeing their family and friends for extended periods. so a move interstate won’t be as big a shock for the trio as it might be for other draftees.

Echuca resident, Brodie Kemp said, “The boarding experience has made me feel a lot more confident about going anywhere, whether its interstate or in Victoria.”

Boarders at the school spend up to a month without seeing their family as they spend their weeks doing classes, sport and school activities as well as homework each night at the Corio campus.

Coming to the school as sport scholarship students for the trio was a challenge as they didn’t know anyone. It was a valuable experience to have overcome the adversity of coming to a new big school and fitting in for the talented footballers as it will be an experience similar to what they’ll receive when they arrive at their AFL clubs this week. 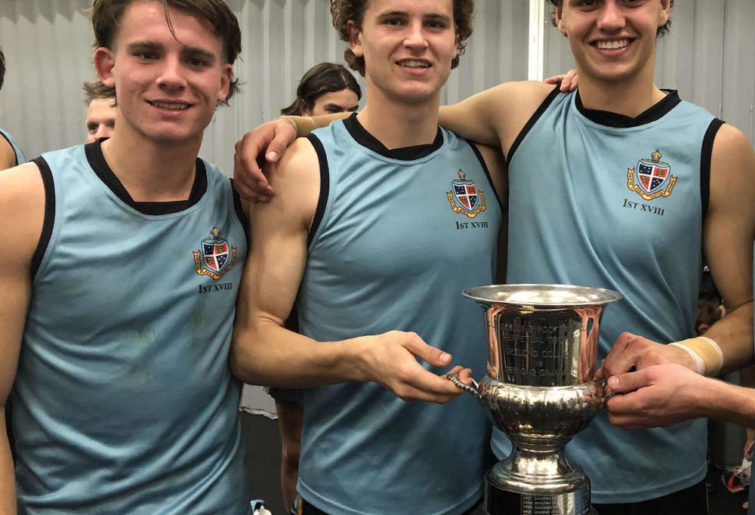 John Arton-Powell, who was involved with Serong for two years as Head of House described him as a “structured, disciplined, talented and robust” character.

Having personally been in school classes and football seasons with the trio as well as cricket seasons with Serong, it can be guaranteed that they possess the determination to undertake any challenge. While they are yet to find out their VCE results, high marks were constantly achieved in assessments putting them at the top end of the class on many occasions.

Serong was awarded on the school’s Speech Day, a distinction prize for Accounting as well as the S E Bailey Memorial Cup for Sportsmanship. Dow and Kemp were exceptional economics students in Year 12 leaving themselves a chance to become economists in life after AFL. A high standard of results for the trio won’t come as a surprise to classmates when they are revealed in mid-December.

The 2019 AFL Draft is likely to mark the eighth player since 2017 to be drafted out of Geelong Grammar School. In 2017, Brent Daniels (GWS), Paddy Dow (CFC), Lochie O’Brien (CFC) and Jarrod Brander (WCE) were picked up by AFL clubs. The following year, Jye Caldwell (GWS) joined his former school teammate and AFL grand finalist Daniels at the Giants.

Daniels mentioned how “boarding school motivated me to get better as I was constantly surrounded by good players such as Paddy [Dow], Obi [Lochie O’Brien], Jye [Caldwell] and [Jarrod] Brander”.

“Living away from home also gave me more independents which was helpful for my transition to the Giants”.

Caleb Serong is touted by draft experts to go somewhere in the top ten, while some have the Gippsland midfielder/small forward predicted to go as high as pick three.

Brodie Kemp, sustained a serious knee injury in school football during the season which has potentially brought him down the draft order somewhere between pick seven and twenty but the 192cm utility is still a firm chance to be announced in the first round of the National Draft.

Thomson Dow is unlikely to join his brother at Carlton next season, but the midfielder who can play forward and back is a chance to go as high as Pick 20 in the Draft. He could also fall as low as Pick 35 where the Pies could snatch him as a bargain.