The Raven resurrection behind Magic Jackson

While the Cincinnati Bengals are mired in their worst ever season and Pittsburgh and Cleveland belt each other with inanimate objects, the Baltimore Ravens are cooking – and the name behind the Raven resurrection is the second year former-Heisman-trophy-winning phenom quarterback out of Louisville. Lamar Jackson.

It is an incredible story for a young man who was advised to change to the running back or wide receiver position after the Ravens oddly traded back into the first round to take Jackson in the 2018 NFL Draft.

After making the playoffs twice since the franchises last Super Bowl six seasons ago – and with the offence growing more and more stale by the week with Super Bowl MVP Joe Flacco – the Ravens have morphed into the league’s scariest outfit seemingly overnight.

As a rookie in 2018, Jackson’s performance gave fuel to those who doubted his quarterbacking potential. In 16 games Jackson threw for six touchdowns against three interceptions, averaged 75 passing yards per game and 43 rushing with an overall quarterback rating of 84.5.

Jackson’s stat line this season is unrecognisable. In 11 games Jackson has 25 touchdowns against five interceptions, averaging 220.6 yards per game through the air and 79.6 on the ground with a quarterback rating of 111.4.

That astonishing average rushing yards per game number is good for ninth in the league and is the most from a quarterback by a country mile – Arizona rookie Kyler Murray is next with 38. 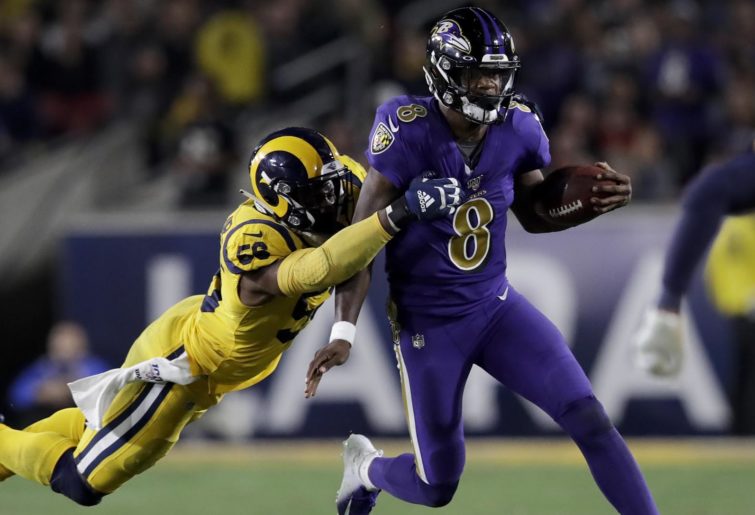 For coach John Harbaugh, Jackson and the Baltimore offence, everything changed after the team’s playoff loss to the Chargers last January – a game in which Jackson fumbled three times and threw an interception.

“They’re going to have to eat their words soon enough.”

And thus, Harbaugh has reinvented both this Ravens offence and perhaps the way general managers and offensive coordinators go about building around their young quarterbacks moving forward. Where they once would drop a young signal caller into an environment and ask them to sink or swim, perhaps now the league will learn from Baltimore’s modus operandi.

Create an offence where your young quarterback can flourish. Build, nurture, transcend.

On Monday morning, all eyes will turn to what many believe could be a Super Bowl preview between the upstart Ravens and the red-hot San Francisco 49ers. The 49ers’ dynamite front seven will be the next group tasked with slowing the mercurial Jackson – and it will be the biggest test young Nick Bosa, Fred Warner, DeForest Buckner and the gang have faced all season.

The winner will likely rocket into Super Bowl favouritism around the land.

But it is the magic of Lamar Jackson that has captured the hearts and minds of the nation – and whom has gone to the front of the MVP discussion.

Not bad for a running back.