Colin Batch took the reins post-Rio and began reinventing the team, but to return to the medal rounds at Tokyo 2020, the Kookaburras will need to do it with minimal Olympic experience.

The announcement of the 27-man 2020 Kookaburras squad sees just eight former Olympians available for selection. The silver lining may be that all 18 representatives from the 2018 World Cup team which won a bronze medal are in the squad.

Our 27-player squad for 2020 has been announced! Will this be the group that defends our #FIHProLeague title and brings home Australia's second Olympic men's hockey gold medal? ???? #PrideOfTheKookas

1. Eddie Ockenden, 32 years old (Tassie Tigers)
Has been there and done it all except for one thing. Has seen himself reinvented under Batch.

2. Jake Whetton, 28 years old (Brisbane Blaze)
The move to the midfield has seen him take his game to a new level. Was a nominee for FIH player of the year 2018 and was in the discussion with winner Arthur van Doren.

3. Matthew Swann, 30 years old (Brisbane Blaze)
Is showing signs of slowing down. Plays the team role to perfection, which is why he will be one of the first names picked.

4. Flynn Ogilvie, 26 years old (NSW Pride)
If his Hockey One final is anything to go by, he finally looks ready to deliver on the international stage.

5. Aran Zalewski, 28 years old (Perth Thundersticks)
Team co-captain. One of the purest central midfielders in the game, sets the tone for the team on and off the field. Competitive beast.

6. Andrew Charter, 32 years old (Canberra Chill)
Was the number one goalkeeper at Rio. The battle between Charter and Lovell is sometimes the flip of a coin. Has time gone past him?

7. Tyler Lovell, 32 years old (Perth Thundersticks)
His battles with Charter have provided the team with constant desire to improve this area of the team. Like Charter, is getting on, being the Olympics and the likelihood of only one goalkeeper being selected this could be his final chance. Heartbreak again?

8. Tim Brand, 21 years old (NSW Pride)
Has athleticism, skills and vision. Appears to have taken the next step after being a bolter into the 2018 World Cup squad.

9. Daniel Beale, 26 years old (Brisbane Blaze)
Now a mainstay of the midfield. Is professional and adds attacking value to a very strong midfield.

10. Trent Mitton, 29 years old (Perth Thundersticks)
Oozes class, one of the top three in everything he does. Has missed most major tournaments, but finally cracked the 2018 World Cup. Missed selection for 2012 and 2016. Fingers crossed he makes next year’s Games.

» The Australian Olympic team for Tokyo 2020 – as it’s announced

12. Tim Howard, 23 years old (Brisbane Blaze)
The heir apparent to Mark Knowles. Has the attitude and desire, but it may take one more Olympic cycle at least to reach the heights of Knowles.

14. Jake Harvie, 21 years old (Perth Thundersticks)
The new-age offensive threat. Plays in the midfield for the Thundersticks, but like Ockenden is used in a defensive position to provide a counter-attacking threat in the national setup.

15. Blake Govers, 23 years old
A veteran of almost 100 caps. Top goalscorer in the Hockey One League, posing both a field goal and a penalty corner threat and averages almost a goal a game when he pulls on the gold jersey for the Kookaburras.

16. Tom Craig, 24 years old (NSW Pride)
A supreme athlete whose explosiveness can open up teams. Can play both midfield and striker.

17. Lachlan Sharp, 22 years old (NSW Pride)
A midfielder/forward who provides spark. Might find himself outside the best midfielders in the team but with only 16 players allowed at an Olympics his versatility might see him in Tokyo.

18. Jacob Anderson, 22 years old (Brisbane Blaze)
A striker who proved his worth in his limited opportunities so far. Was part of the Oceania Cup team that achieved qualification for 2020.

19. Joshua Beltz, 24 years old (Tassie Tigers)
A solid defender, however, seems to be sitting behind Swann, Dawson, Hayward and Howard in the pecking order.

22. Corey Weyer, 23 years old (Brisbane Blaze)
Still has enormous potential and is closing in on 100 caps but doesn’t seem to be able to control an international game the way his country (and coach) has been asking him to.

23. Tom Wickham, 29 years old (Perth Thundersticks)
A supremely professional player who has got more out of his body and career than expected. Was part of the Oceania Cup team that achieved qualification for 2020. An unlikely Olympic starter.

24. Dylan Wotherspoon, 26 years old (Brisbane Blaze)
A striker who is closing in on 100 caps and scores in every third game. Missed selection for the Oceania Cup and World Cup qualifiers. Is his international career starting to stall?

26. Jack Welch, 22 years old (Tassie Tigers)
Striker who is a chance for Tokyo but would need to produce in any opportunity presented to him.

27. Johan Durst, 28 years old (HC Melbourne)
Has been in and around the national team for several years, but only has three caps to his name. Still sits behind Charter and Lovell, but time is more on his side than theirs.

Outside chances
1. Aaron Kleinschmidt, 30 years old (HC Melbourne)
A member of the gold medal-winning team at the 2018 Commonwealth Games, but has lost his spot in the Kookaburras squad.

3. Frazer Gerrard, 23 years old (Perth Thundersticks)
If he can get his body right, could be anything.

5. Brayden King, 21 years old (Perth Thundersticks)
Player of the tournament at the Under 21 National Championships, plenty of upside and work to be done.

The Olympic Games only allow hockey teams to have 16 squad members players – a decision based on the cost of athlete accommodation and medals – as a result, most teams will only select one goalkeeper.

What time do the Kookaburras play Belgium in their Olympic men’s hockey final tonight?

In search of their second-ever gold medal in field hockey, the Australian Kookaburras come up against powerhouse Belgium tonight in an Olympics classic. The… 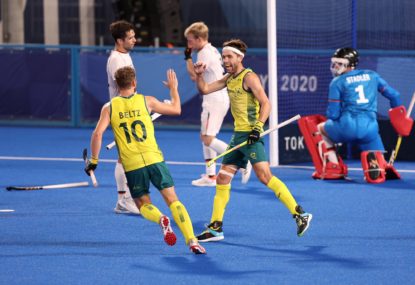 What time do the Kookaburras play Belgium in their Olympic men’s hockey final tonight?

What time do the Kookaburras play Germany in their Olympic men’s hockey semi-final tonight?

They met in the semi-finals in London, and the Australian Kookaburras and Germany will clash again in Tokyo for the Olympic men’s hockey semi-final… 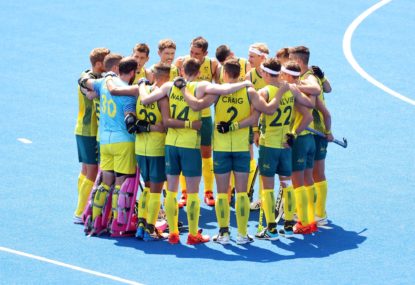 What time do the Kookaburras play Germany in their Olympic men’s hockey semi-final tonight?

Kookaburras put one foot in knockout stage after dominating Argentina

The Kookaburras are all but through to the men's field hockey quarterfinals at Tokyo 2020 after a comfortable 5-2 win over Argentina. The Aussies… 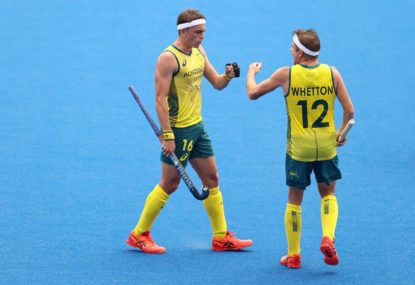 Kookaburras put one foot in knockout stage after dominating Argentina