Everyone loves a winner and Thursday’s Australian live NHL game on ESPN sees the reigning Stanley Cup champion St Louis Blues travel to Pittsburgh for a match-up between heavyweights of both the Eastern and Western Conferences.

What makes this one even more exciting for those of us in Australia, is our very own Nathan Walker being injected into the Blues line-up and making an immediate impact on the ice!

After being called up from the Blues minor league affiliate, the San Antonio Rampage of the AHL, Walker now has a goal and an assist in four games with the big club. Walker’s goal actually came against Pittsburgh last time out, showing immense hand-eye coordination to bat a puck out of mid-air and bury one past Matt Murray in net.

There's no taking this one away. Nathan Walker has his first goal as a Blue and St. Louis is back in front. #stlblues

After having a goal overturned for offside after a coach’s challenge in their previous win against Dallas, Walker joked about this one with Fox Sports Midwest in his post-match interview.

“I wasn’t offside this time,” said Walker. “That’s actually one thing I kind of work on in the summer was batting pucks out of the air like that, trying to meet them when they hit the ice.

“I think I just got a little lucky there as well. I’m sure a goalie’s really not expecting that. I just tried to get it on net, and fortunately it went in the net,” Walker continued in his true, modest fashion.

.@Panger40 to Nathan Walker: "You can skate like the wind. Have you always been that great of a skater?"
Walker: "Yeah, I'm only 5-8 ½ or so, so I've got to make up for it somewhere." #stlblues pic.twitter.com/JdeTwrNRon

Blues success on the back of quality goaltending

St Louis are flying high at the top of the Western Conference and are third overall in the NHL. Their 18-5-6 record is red hot and the team is currently sitting pretty, on a four-game win streak.

Even without taking the Nathan Walker angle as an Australian, the Blues are such a cool story. After sitting in last place overall in the NHL last Christmas, the Blues fired their coach, made a goaltending change and turned their season completely upside-down.

If someone told you the Blues would go on to win the Stanley Cup after the start they had, you would have told them they were mad.

The run the Blues went on to reach the Stanley Cup final can be attributed to goaltending and this season’s strong start, once again shows just how important this aspect of hockey is.

Jordan Binnington came up from the minors and led his team to a cup from between the pipes. With the pressure now off the previous number one, Jake Allen, the pair are working in tandem and pushing the Blues to even greater heights.

David Perron leads the Blues in points, with 28 on the season thus far, but the real story of the Blues remains goaltending. Binnington and Allen boast goals against averages of 2.26 and 2.35, respectively.

The Pens just can’t catch a break, can they?

Pittsburgh are 14-10-4, but have lost their last two in regulation. One of those was their last start against these same St Louis Blues.

It’s not going to get any easier for the Pens, who added Brian Dumoulin to their already meaty injury list that includes the likes of Sidney Crosby, Nick Bjugstad, Bryan Rust and Justin Schultz.

Dumoulin was unluckily injured during his first shift last start and will now require surgery to repair lacerated tendons in his left ankle. He’s expected to miss the next eight weeks.

Pittsburgh remain in the second Eastern Conference wildcard spot and just need to get through this period of injuries. They’re in rough shape and, quite frankly, are doing better than anyone expected them to do without so many of their superstars night in, night out. 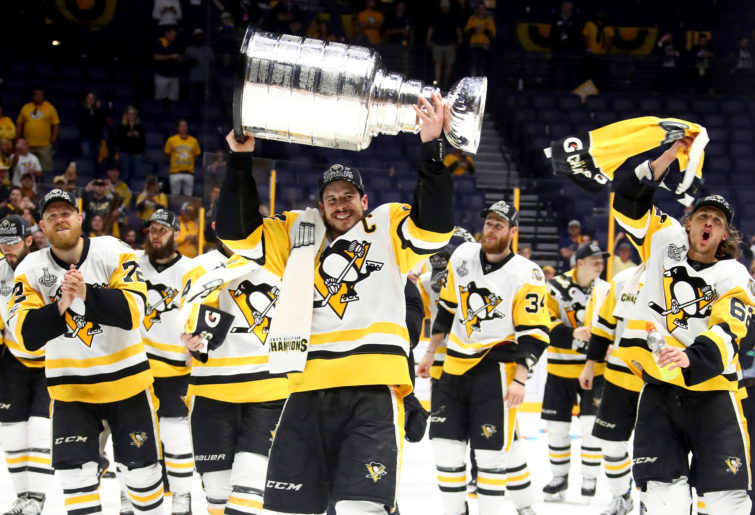 The Crosby era of success has seen plenty of Australians board the Penguins bandwagon but, with the superstar still out for another five to six weeks, attention shifts to the next generation – who are actually doing more than simply holding down the fort.

Most notably, their leading scorer Jake Guentzel has 27 points on the season, with 15 of them being goals. This puts him daylight ahead of anyone else in the team, with Jared McCann the next best on just nine goals.

Matt Murray is expected to get the nod in net for the Penguins, with a goals against average of 2.84.

With St Louis taking last week’s match-up against the Penguins 5-2, they’ll once again go into this one as heavy favourites.

Flick over to ESPN2 Thursday at midday and watch our very own Nathan Walker playing NHL hockey, live on Australian TV.

The Colorado Avalanche are back atop ice hockey's mountain after dethroning the two-time defending champions. Behind a goal and an assist from Nathan MacKinnon,…

The Pittsburgh Penguins will be heading into the 2021 NHL draft with only five picks throughout the seven rounds. Their earliest is a second-round…