Simmons slithers through games. He’s lithe and snake-like, like Paul George without as much menace, with zero threat of rising up for a jump shot at any given moment.

On defence, though, the threat is always there. Simmons is a genius on that end, leveraging his ridiculous athleticism with a ridiculous mind, getting his limbs everywhere, jumping passing lanes and making dribblers afraid.

He’s not an unfair, destructive force on defence like peak, engaged Kawhi Leonard – who just overpowered poor people and devoured them. Simmons is more subtle – a thief who operates in the dark, a 6’10” insect.

The trick is, though, that he’s not just all arms and legs – he’s strong and built, capable of switching onto bigs and holding his own in the post. He is the most dynamic and versatile defender in maybe the most talented defensive starting line-up the game has ever seen.

On the other end it’s more complicated. Perhaps one day Simmons will start shooting, but it’s not happening yet and can’t be counted on. When the Sixers are operating in a half-court offence against a set defence, Simmons is a liability. He can be in the dunker spot and he can cut, but his drain on spacing is unmistakable and suffocating for the offence. 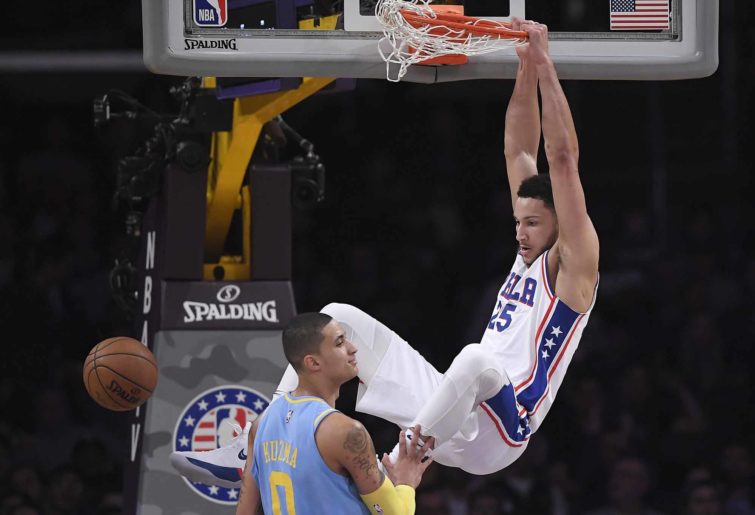 In the half-court, generally he takes a few hard dribbles in – a clear bluff – before meekly backing out, with nothing gained and a few seconds lost. Without the threat of any vague pretense of a shot, he is too easy to defend.

He does have some moves. He uses hesitation dribbles to great effect, leveraging the expectation of meekness to his advantage, turning a shy surveying dribble into a sudden, devastating line drive sprint to the hoop. He has something of a post-game, with his intelligence, patience and athleticism enough to compensate for a lack of range or exquisite touch.

His shooting possessions still feel, though, mostly the product of the coaches telling him that he has to shoot. It feels forced – the uncomfortable floaters and one-handed fading tosses at the rim while his opposite hand flails in an awkward attempt to get balanced, always desperate to avoid contact and steer clear of the free throw line.

But despite the uneasiness and the strange fit, Simmons still makes himself felt on offence. The first five seconds of the shot clock belong to Simmons. He owns transition, where he’s a LeBron-like force, smoothly barricading to the rim, selfless and astute, identifying all the lanes and optimal angles in split seconds. He always pushes the pace, capitalising on slack defenders and soft structures, piercing unformed layers to dunk himself, or creating open threes for teammates.

His best comparison as a player is probably Draymond Green (or some mutated version of Green featuring an injection of Jason Kidd) – an outstanding, versatile and disruptive defender and a brilliant passer who pushes the pace.

Simmons isn’t the level of defensive genius that Green is, nor does he have Green’s stoutness or ability to protect the rim. Green, on the other hand, doesn’t have Simmons’ height or uber-athleticism. But the concept is basically the same: a wonderful, unique player who can be exposed in half-court offence.

Everything else about Simmons’ game is so rare and exceptional that the exposed moments are endurable. His fit on any team would be delicate, in terms of maximising his strengths, but it’s especially the case on this bizarre Philadelphia team.

Simmons is a horrible fit with Joel Embiid, who works in the post, clogging up Simmons’ space to drive and shining the light brighter on his inability to space.

There is enough talent on the Sixers, though, that the offence should always be able to manufacture a respectable amount of points. And the defence is all-world, with the hope that it can do the heavy lifting and drag them to the Finals.

If they get there, the weaknesses of Simmons will be more exposed than ever before. But the strengths will still be something to savour, as they are now.