Remember when you used to watch the old World Soccer show on SBS on a Saturday afternoon and every few weeks the feature game would come from Argentina?

Well that will be the Socceroos at the Estadio Monumental in Buenos Aires next June.

And even though it’s a bit of a shame none of Argentina’s group stage games will take place at La Bombonera – quite possibly the most famous stadium in world football, even though expansion plans mean it will soon look very different – a trip to Buenos Aires is still a football hipster’s dream.

The Estadio Monumental is one of grand old dames of South American stadia and while you won’t exactly get a modern match-day experience should you make the trip over to the Argentine capital, that’s exactly what makes the whole experience so unique.

A trip to the Copa America is the sort of once-in-a-lifetime football fantasy we could only dream about when we were watching games from faraway lands on our terrestrial TV broadcasts in the ’90s.

Sure, this might be the umpteenth Copa America with a new-look schedule and two more seemingly randomly invited teams, but in this case CONMEBOL’s typically haphazard organisation is well and truly Australia’s gain.

And it’s not the like the rest of our lengthy five-game group stage is anything to sniff at.

The Socceroos begin the tournament against old foes Uruguay in the central Argentine city of Cordoba, before heading to the outskirts of the capital to face both Paraguay and Bolivia at the newish Estadio Ciudad de La Plata.

Then it’s off to the Monumental – host of the 1978 World Cup final and home to the world famous River Plate – to take on host nation Argentina in what may well be Lionel Messi’s international swansong. 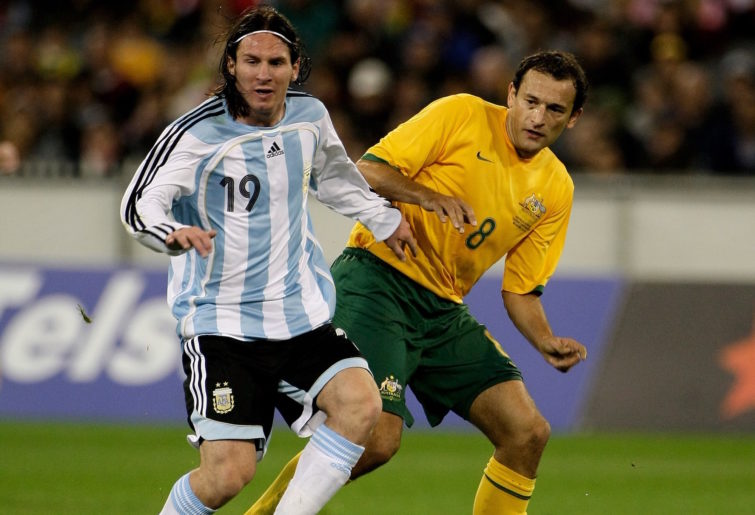 Lionel Messi will face the Socceroos again at the 2020 Copa America. (Photo by Robert Cianflone/Getty Images)

And if you haven’t had enough of Cordoba, you can head back there to watch Australia’s final group stage game against Chile.

Will the Socceroos even win a game at the tournament? Bolivia at least seem beatable.

But to try and conjure up a points tally is to miss the point somewhat, because the Socceroos just being at the Copa America will be an unprecedented moment in history.

That’s not to imply that Graham Arnold’s team will head to the tournament as easy beats.

If the Socceroos can better the performance of the 2020 Copa’s other invitational side Qatar, they’ll have done well.

And for the uninitiated who might wonder why Australia is even playing in the oldest international tournament in world football, it’s worth remembering that CONMEBOL have been welcoming invitational teams since 1993.

At first it was usually teams from North America – Mexico made the final at the first time of asking – however Japan made their first appearance in 1999 and Qatar will be making their second consecutive appearance at next year’s finals.

And with the South American sides set to be in the midst of World Cup qualifying when the tournament kicks off, the Copa represents a chance for Australia to genuinely test itself on the international stage.

Not since the 2017 Confederations Cup have the Socceroos been seriously tested outside of World Cup dates, and a trip to South America is something many of us might have feared we’d never see again.

Will Uruguay be fired up to take on the Socceroos at the Estadio Mario Alberto Kempes? You’d better believe it.

Will Leo Messi lead his national team in a tournament co-hosted by Colombia, with the final to be played at the Estadio Metropolitano in Barranquilla? Maybe, maybe not.

But who cares about that right now? The Socceroos are going to the Copa America!

And if you don’t mind, I’ll be busy looking up flights to Buenos Aires for the rest of the day.