The idea behind the dangerous MCG pitch was right, but the execution means another Boxing Day snoozefest awaits

It’s a strange day when you praise a groundsman for producing a pitch so dangerous it forced a first-class match to be abandoned.

Praise, though, is what MCG curator Matt Page deserves – for the intent behind the 22 yards of turf which was rolled out for Victoria versus Western Australia, if not the execution. Definitely not the execution.

No wicket which catapults deliveries off a good length into a batsman’s head or ribs is acceptable – particularly from a bowler with Peter Siddle’s now-gentle pace – but nor has been the barren MCG strip in recent years.

The most famous sporting ground in Australia, the perpetual host of the most famous fixture in the cricket calendar, is home to a pitch so thoroughly devoid of life that the much-vaunted contest between bat and ball only exists in spectators’ and bowlers’ dreams – and outside Victoria.

The recent Test matches at the venue have been laden with runs and light on entertainment. Last year, it was a dour win for India set up by a 443-run first innings. The two sides produced a draw on Boxing Day a few years earlier.

In 2017, Alastair Cook (244*) and Steve Smith (102*) put on masterclasses in how to grind out massive scores without offering a chance. Mitchell Marsh – known best for booming drives around the park before failing to stay at the crease for any significant length of time – made 29 off 166, unbeaten at the crease with Smith when the captains settled for an inevitable draw.

The two Australian victories in Melbourne in the past five years were made possible only by the lack of quality opposition. The West Indies might have failed to pass 300 in either of their innings as they were soundly defeated in 2015, but that was not due to the pitch. Australia used only five batsmen in their first innings. Four made centuries.

And the 2016 instalment had “draw” written all over it until Pakistan produced the kind of capitulation only Pakistan can, somehow collapsing to an innings defeat on the final day despite declaring their first innings sat 9-443.

It’s not as if these mammoth innings have been entertaining exhibitions of attacking batting, either. The lifeless nature of the pitch has demanded an equally comatose brand of accumulation.

The Sheffield Shield has offered no alternative narrative. Of the last ten competition fixtures to be played at the MCG, only two have produced a result, and more than a third of the innings there have been ended by a captain calling in his batsmen, not the no.11 losing his wicket.

So to see Page and his team try to spice up the pitch is at least an acknowledgement of the issue.

The problem now is how he reacts to the abandonment. Yes, he’ll have an unused strip work with for the marquee fixture. But there are no more Sheild games to have another crack at a lively deck before Boxing Day.

Given the recent abandonment, who could blame Page for playing it safe and dishing up a deck much like last year’s? It might only cater for dour cricket, but it will ensure the Test lasts the full, five-day journey. 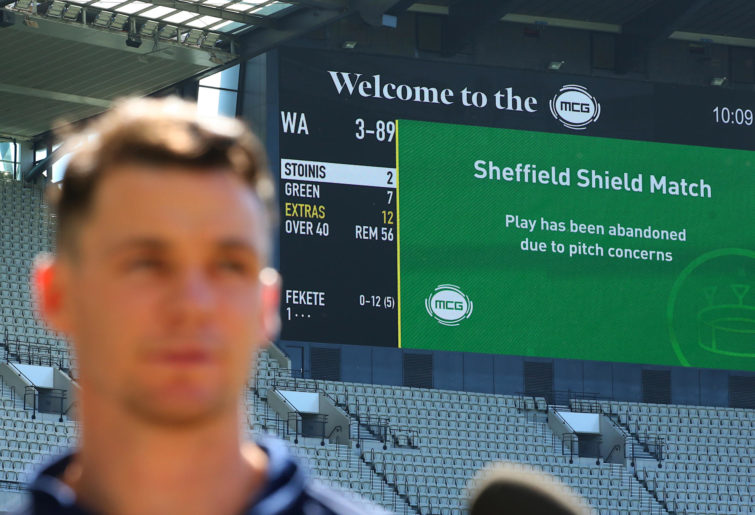 It’s also unlikely to put the ground at risk of another ‘poor’ pitch rating, after it became the first Australian cricket venue to ever be handed that evaluation following the 2017 Test.

Lively surfaces tend to be given far less leeway by match referees. While last year’s fixture was largely soporific, the MCG pitch was graded as ‘average’, meaning, in the eyes of the ICC at least, it was just as good as the Optus Stadium deck which was handed the same rating.

This despite the Perth Test being the most exciting of the entire series between Australia and India. Yes, conditions could be tricky for batsmen, but Virat Kohli, Marcus Harris, Ajinkya Rahane, Travis Head and Usman Khawaja all showed it was entirely possible to occupy the crease for long stints.

Justin Langer put it succinctly following the match: “Anyone who says there’s anything wrong with that wicket, they must’ve been watching a different game.”

Average though it may have been rated, it was exactly the kind of surface the MCG needs.

It’s unlikely, though, that those at the MCG will be brave enough to try to produce something similar for Boxing Day. It may not even be possible for them to do so, given the venue uses different drop-ins to the likes of Optus Stadium and the Adelaide Oval. It will be a welcome day when the upgraded pitches are ready to go.

For now, Page, his team of curators and everyone else involved at the MCG are in a thoroughly unenviable position. Much as cricket fans don’t want to see another lifeless deck, the risk of two dangerous surfaces in a row is looming over the ground.

You can be certain that won’t be allowed to happen. Unfortunately, that means we’ll all have to wait another year for the MCG to produce an entertaining Test match.