Labuschagne channels Smith to save Australia

There is always an upside to an injury, and when Jofra Archer felled Steve Smith at Lord’s last winter, Marnus Labuschagne received a chance to kickstart his career.

He crafted four consecutive half-centuries in the Ashes. The importance of them could not be exaggerated in the context of the series. But he was overshadowed by Steve Smith’s incredible form.

Labuschagne landed in Australia as a batsman expected to build on that form. And he did so handsomely in the previous series against Pakistan.

Roughly a year ago, when the South African-born player faced India in Sydney, he went on to score a patient 38. It was the best a batsman could produce against a highly skilled bowling unit. And like several greats, his career got back on track through a county cricket stint in England.

Did anyone of us think that this chirpy yet tough personality would discover something akin to Steve Smith’s prolific run-scoring ability?

Labuschagne has already adopted his style of leave. Before the Test in Perth, the duo had batted in only five innings together and averaged 45.4. They played together for the first time for Australia in Manchester in the fourth Ashes Test this year, building a partnership of 116 runs. On that occasion, they didn’t face the pink ball and the likes of Stuart Broad, Jofra Archer and Craig Overton weren’t as threatening as Neil Wagner and Tim Southee.

This New Zealand team gave the much-needed contest that Australia were looking for. Even with the pitch being a belter and the conditions unforgiving for a bowler, there were no free runs on offer. And this time, he faced a different situation from Brisbane. The 26-year-old was up against Colin de Grandhomme, who wasn’t the X-factor in the team but kept things tight in torrid conditions.

As he conceded in the press conference, he was waiting for the right delivery to pounce on. He pounced on every bowler in New Zealand’s ranks.

Cover drives, caressing straight down the ground, guiding the ball in between the slips – there was no other shot left in the book. 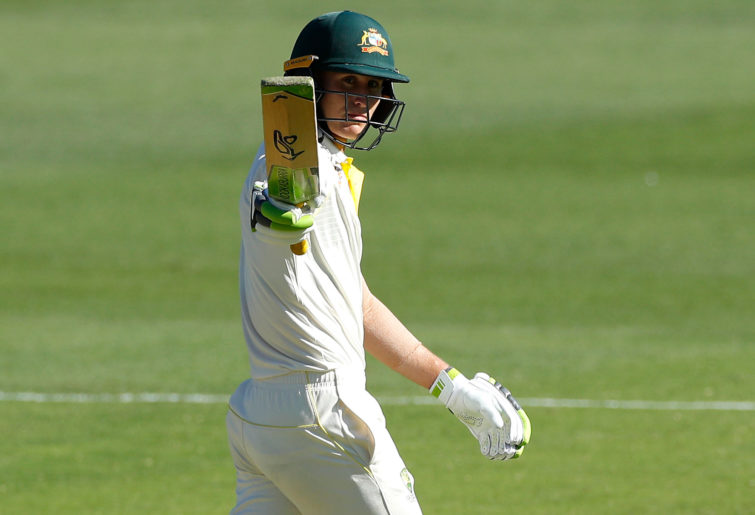 Labuschagne survived more than a couple of shouts from Tim Southee, appealing for LBWs and almost holing out to gully off Wagner. On 95, he dared to step out of his crease. The elegant right-handed batsman shimmied down the track and lofted the ball over the ropes at long on to get to his third consecutive hundred.

By the end of the day, Marnus Labuschagne and Travis Head had steered Australia to safety, getting themselves slightly ahead. But this was as stubborn and enormous of a challenge as the Baggy Greens have faced this summer.

While Steve Smith normally holds the fort, but he has looked out of touch. He was given a life in the slips before Wagner bowled a bouncer that Smith chose to hook, only to get caught at leg gully.

During his stay of 43 off 164 deliveries, there was a role reversal. It seemed as if Marnus Labuschagne disguised himself as Steve Smith not only during their partnership but from the moment he arrived in the middle.

He didn’t pummel everything. With gum in his mouth, Labuschagne believes in grinding out an innings, without a dent in his concentration. His unbeaten 110 came against one of the hungriest bowling attacks in Perth, and he can hope to keep up his rich form to shape a better Australian team for overseas conditions.