In retrospect, the last ten years of Formula One can be summarised as being the decade of dominance – between two teams across two eras of regulations.

Though it would be unfair to all the facets that shaped the sport in that time, if only the reign of two was remembered.

Red Bull Racing emerged in an enthralling 2010 season as the number one team, besting the reinvigorated McLaren and Ferrari teams – who had their title aspirations boosted by the respective arrivals of Jenson Button and Fernando Alonso, but ultimately ended the decade without titles.

The culmination of the energy drink giant’s development following the buyout of the former Jaguar team, saw the Adrian Newey-designed RB6 raced beyond its limits by a fresh faced Sebastian Vettel and Aussie hopeful Mark Webber – en route to what would be the first of four consecutive constructor’s championships.

Abu Dhabi in 2010 will forever be remembered for the famous finale, in which four drivers were in contention for the championship. Alonso, who was the favourite, ended the race stuck behind the Renault of Vitaly Petrov, while Vettel who had not led the standings at all throughout the year – won the race and became the youngest ever Formula One champion at 23 years old.

That was the start was Red Bull’s dominion and little was it conceived that a relatively young squad, owned by an energy drinks company would establish its own name in the pantheon of great Formula One teams. 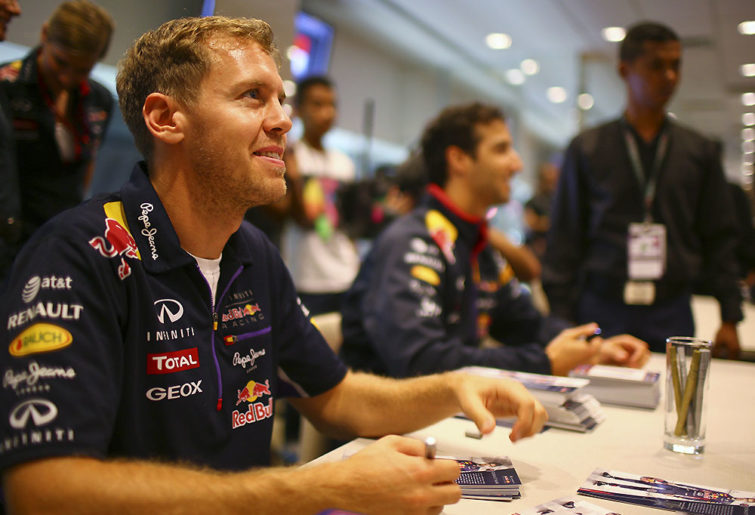 Where does all the time go? (Getty Images/Red Bull Content Pool)

The shift over to the more volatile Pirelli tyres in 2011, as well as their exploitation of loopholes around the banned ‘blown diffusor’, saw Red Bull and indeed Vettel annihilate the competition that year – comprehensively also beating teammate Webber, whom with tension continued to simmer in this period before the Australian’s retirement in 2013.

A highlight for many during 2011 would have been the Canadian Grand Prix, which due to numerous rain delays went for almost four hours and concluded with Vettel making a mistake on the final lap, allowing Button to claim a famous victory for McLaren from the rear of the field.

More of the same was expected in 2012 and with the introduction of the ‘step noses’ in the car designs on safety grounds – there were collective groans heading into the Australian Grand Prix.

Though what followed was seven different winners from the first seven races, including maiden wins for 2016-world champion Nico Rosberg in China and that emphatic victory in Barcelona from Pastor Maldonado for Williams.

For the first time in Formula One, six world champions took to the grid in the same season, with 2007-world champion Kimi Räikkönen making a popular comeback to the sport with Lotus (previously Renault).

The Iceman achieved the sole win for the Enstone outfit that season in Abu Dhabi with his ‘leave me alone, I know what I’m doing,’ radio message immortalised.

It was unfortunate though that seven-time world champion Michael Schumacher, who returned with the new works Mercedes squad in 2010, hadn’t the same fortunes during his comeback – as eventually he retired a second time at the end of 2012, making way for Lewis Hamilton who’d left McLaren.

Schumacher, who at the end of 2013 was left fighting for his life after a skiing accident and until this day his exact condition is unknown – stood on a Formula One podium for the first and last time with Mercedes in Valencia; the famous race won by Spaniard Alonso.

Three points was all that separated Vettel from Alonso at the end of that championship after a dramatic conclusion in the wet conditions of Brazil, which saw Nico Hulkenberg almost win in a Force India and was the scene of McLaren’s last victory in Formula One.

By all accounts, Alonso should not have got to where he did in that season with the Ferrari he had – though this was the hallmark of his talent. 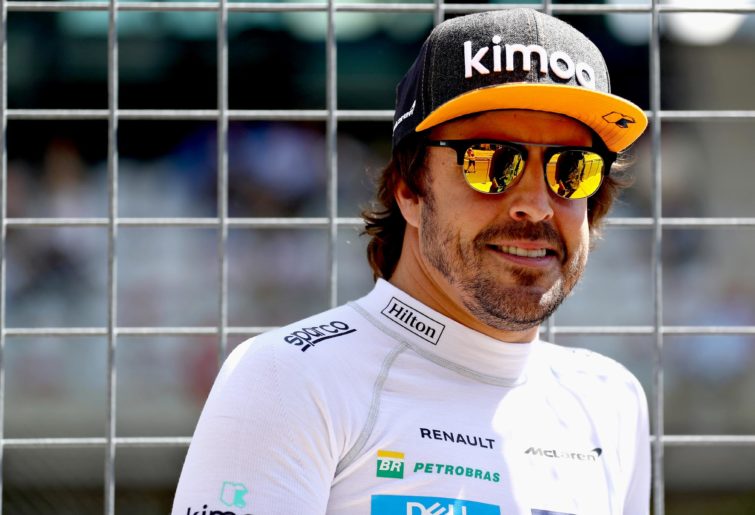 “We have to remember these days. We have to enjoy them while they last,” were the emotional words from Vettel as he and Red Bull celebrated their fourth consecutive world championships in 2013. All while within the factories in Brackley and Brixworth, intense preparations were ongoing for Formula One’s seismic regulation shift in 2014.

At the time, this was a change which was met with a frosty reception given Formula One’s commercial bosses failing to market this as a positive direction for the sport to head into – given the shift in the wider automotive industry to hybrid power.

It saw the collapse of the three new teams that entered the sport in 2010 as perennial backmarkers, in the forms of Hispania, Caterham and Marussia – with the latter two respectively lasting one and three years into the hybrid era.

Marussia were also rocked in that time, as was the rest of the Formula One community by the death of rising young star in Jules Bianchi – who succumbed to injuries sustained in a horrific accident at the foreboding 2014 Japanese Grand Prix.

This was a change though that Mercedes-Benz had been anticipating and readying all its departments for. Ross Brawn, who after his success with his own team, had hired Toto Wolff from Williams as his successor, with chief designer Paddy Lowe being poached from McLaren and the late great Niki Lauda also joining as non-executive chairman.

Lauda, who sadly passed away this year was the focal point of Mercedes’ tributes upon wrapping up their sixth consecutive constructor’s title. The former world champion was attributed to luring Hamilton from McLaren to Mercedes, where he has been shaped to be the six-time world champion he is today.

Mercedes spent the first three years of the hybrid era without any challengers, as Hamilton battled Rosberg in an old-fashioned Prost-Senna style rivalry. Scenes from Bahrain in 2014 put viewers on the edge of their seats, watching the two Silver Arrows race wheel-to-wheel for laps on end.

Hamilton added two titles in the first two years to his tally, while Rosberg got the better of the Briton in 2016 to win his maiden championship at the final race – shocking all by announcing his immediate retirement from Formula One afterwards. Their rivalry entertained many, while the rest of the competition seemed leagues behind the mighty Silver Arrows.

Vettel quit Red Bull in 2014 after being beaten by his newcomer teammate in Daniel Ricciardo and went over to Ferrari to emulate his idol Schumacher, as Alonso also quit the Scuderia to spearhead the eventual failure the McLaren-Honda project was. All three outfits, who were championship contenders in previous years – struggled to adapt to the new power-units. 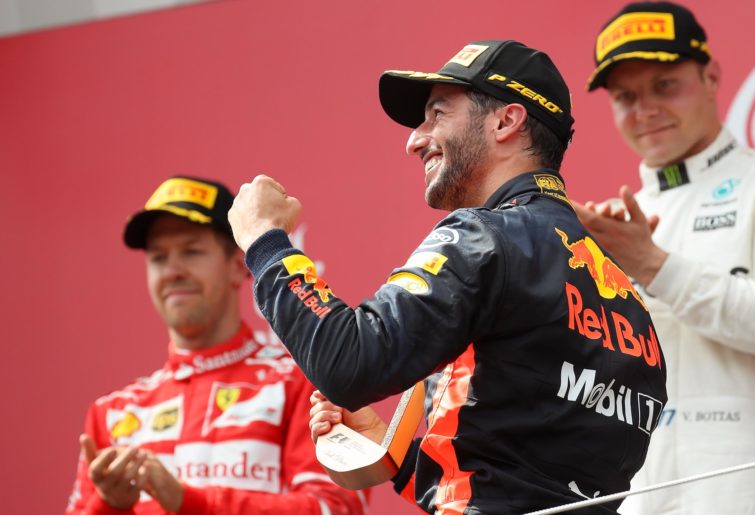 Though Ricciardo stole wins on occasion for Red Bull in that time, as did Vettel for Ferrari in 2015. The once in a generation Max Verstappen made his debut for Toro Rosso at the age of 17 and not even a year later in 2016, had become the youngest race winner for Red Bull at the Spanish Grand Prix.

Only Ferrari have been able to challenge Mercedes for the title from 2017 onwards, when aerodynamic changes brought in faster and more aggressive looking cars. Apart from Hamilton’s teammate who replaced Rosberg in Valtteri Bottas, who impressed with multiple podiums in the Williams and now is a 7-time race winner.

A litany of errors however from Vettel in 2017 and 2018 thwarted any chance of the Scuderia’s title drought, which dated back to Räikkönen’s 2007 triumph. The Finn himself endured an unsuccessful second tenure in red, before switching to Alfa Romeo (formerly Sauber) for this season.

The Prancing Horse’s future perhaps lies within the 21-year old Charles Leclerc, who announced himself as a top-line driver with his six pole positions and two wins for Ferrari in 2019. As with Red Bull and Verstappen, who together with Honda power replacing Renault this year – have put forward a case to challenge for the title in 2020.

And that’s where it seems the last ten years of Formula One, the dominance of Red Bull and Mercedes and the shortcomings of the sport’s owners has led us; the future, spearheaded by a new generation of champions such as Leclerc and Verstappen.

The sale of the commercial rights from the Bernie Ecclestone headed CVC to the media savvy Liberty, has already seen a dramatic shift in consumer and fan focus – as well as placing emphasis on the 2021 rule change to improve racing across the board and targeting net-zero for Formula One’s entire carbon footprint by 2030.

Rookies like Alexander Albon, George Russell and Lando Norris all wowed in 2019 and have many excited about the future world champions. McLaren are on the rise again with the young, but mature Carlos Sainz who had a breakout year en route to fourth in constructor’s championship.

Renault (formerly Lotus) meanwhile need a boost in form with Esteban Ocon returning to the sport in 2020 alongside Ricciardo.

So, while the decade largely will be remembered for the dominance of two teams, there was much more to it than just what was printed in the results. And it will be those memories that we take into the next 10 years of Formula One.

The second part of my season review rates how the teams and drivers performed in the second half of the year.