Is attacking football more important to the A-League than winning?

It’s a bit of a mystery why Western United resorted to such negative tactics on Friday night, because based on the performance they would have beaten Brisbane Roar handily anyway.

“Well it may be winning ugly, but they’ve won it, Western United… a real team effort” is how Fox Sports commentator Simon Hill summed up the 2-0 victory.

So were Mark Rudan’s tactics a throwback to the ‘catenaccio’ era or an act of genius?

When Besart Berisha cleverly put his body between the ball and a Scott Neville challenge inside the penalty area with barely three minutes on the clock, we caught the first glimpse of how the visitors might be tempted to play.

“I think there was a stat, with ten minutes to go, they’d completed only… was it 39 passes in the second half?” Hill said of Western United’s previous 3-1 win over Melbourne Victory

“They really did, with the greatest respect to Mark Rudan and his team, they did park the bus in the second half.”

But his next line was the most telling.

“Mind you, Victory weren’t good enough to take it off them.” 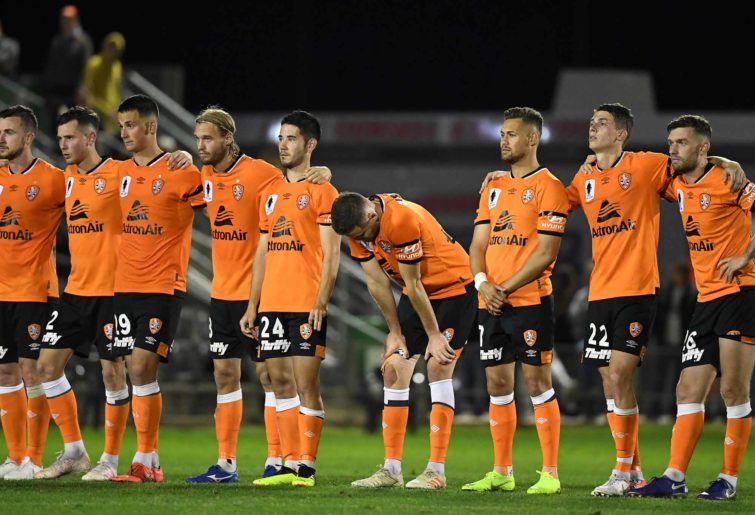 And that, in a nutshell, summed up the duality of watching Brisbane Roar labour to their latest home defeat against an opponent whose sole interest was in collecting three points.

Because no matter how much attacking football the Roar tried to play, they simply couldn’t put the ball in the back of the net.

Things would have been different had Stefan Mauk not seen his skidding effort deflect off Andrew Durante and wide of the far post five minutes before the break.

Yet the biggest difference of all was simply Alessandro Diamanti.

It’s one thing to understand the quality of an opponent, but as Diamanti demonstrated in the tenth minute, another thing entirely to try and stop him.

His pinpoint cross to Connor Pain to open the scoring was another demonstration of why Diamanti is one of the favourites to win the Johnny Warren Medal.

And when Berisha side-footed home on the stroke of half-time, he delivered a classic one-two punch.

Yet the question remains: why were Western United so negative in the second half?

The home fans were incensed by the visitors’ go-slow tactics, their tendency to collapse under challenges and goalkeeper Filip Kurto’s persistent time-wasting.

Towards the end of the game, the official Fox Sports statistics revealed that Brisbane Roar had completed 580 passes compared to just 209 from Western United.

And the question must be asked of whether that’s the sort of football Fox Sports viewers want to tune into on a weekly basis.

Although judging by the giant advertisement for the cricket plastered all over the A-League coverage this weekend, maybe Fox Sports don’t want us tuning into the football at all?

Do we really need a gigantic cricket super on our #aleague coverage, @FOXFOOTBALL? pic.twitter.com/0OKpg6Qi2X

Because Rudan just coached his team to their first ever interstate victory, their fifth overall and saw his team move up to third in the standings.

And realistically he’s done nothing wrong in doing so.

There’s no rule that says teams have to play attacking football, especially when they’re 2-0 up in the heat and humidity of Brisbane.

Yet you can understand why tempers boiled over at full-time.

The frustration around the ground was palpable and it was no surprise to see the two clubs engage in a war of words.

Western United set out their stall to frustrate Brisbane Roar and they did so perfectly.

But they also possess the sort of quality players who can turn any match on its head.

Mark Rudan arguably just gave us all a coaching masterclass.

The question is, given the sort of metrics we’re seeing this season, whether that was the sort of footballing lesson the A-League needs right now.