John Wayne Parr’s victory over Anthony Mundine brought to a close one of the most legendary yet underappreciated combat sports careers in Australia’s history: a trailblazing combat athlete who was blessed with the Muay Thai venom.

Parr’s martial arts life began in Brisbane at the age of just 11 and his final fight brought a career, which had spanned the world, fittingly back to where it began.

Combat career finales are rarely glamorous, but having defeated Anthony Mundine by split-decision victory in his final professional fight, ‘The Gunslinger’ Parr can lay down his weapons safe in the knowledge he’s still got a few rounds in the chamber.

Given the downward career trajectory of Mundine, a combined age of 77 years between the two fighters and the fact Parr had not fought in a boxing bout since 2003, this was a fight which attracted ridicule in some quarters.

In the end it was a competitive fight by two legends who even in middle age have maintained a superbly high athletic level.

Mundine still had the quick hands with the wider array of dangerous shots but was simply overwhelmed by John Wayne Parr’s furious volume.

Blessed with Venom is an excellent documentary which details Parr’s remarkable journey from bright-eyed Australian kid to one of the most dangerous fighters on the planet.

The documentary tells the story of a young Parr developing a father-son-type relationship with Gold Coast Thai restaurant owner Richard Vell, who would eventually sponsor the young fighter to train in Thailand in 1996.

While Muay Thai gyms in Thailand now open their arms to westerners as a form of martial arts tourism, in Parr’s day it was a rarity, and in the words of his sponsor, he was not “going on a holiday”; he “was going to hell”.

In a process that began under Vell’s tutelage, Parr did not simply learn how to fight; he learnt how to live, learning the culture and language, centring himself within a respectful demeanour that belies the raw violence he displays in the ring.

After several months at a gym in Pattaya, fate would intervene and give the Australian the opportunity to train at an elite facility in Bangkok under a trainer who disliked westerners and had never trained one before.

It was at this gym Wayne Parr would become ‘John Wayne’. His new identity in name would represent the metamorphosis the young fighter was undergoing as he was forged into a fighter of spectacular firepower and forever immortalised as ‘The Gunslinger’.

Muay Thai is known as the art of eight limbs as the style utilises not just punches and kicks but knees and elbows, doubling the weapons each limb provides. Parr would be declared the only westerner to fight perfect Muay Thai by the foremost fight promoter of the era, Songchai Ratanasuban.

Parr achieved feats in Thailand which surely will not be eclipsed, becoming the first Australian to fight at Lumpinee Boxing Stadium, the Muay Thai Mecca in Bangkok, and he was the first foreigner to win the Kings Cup, doing so twice, an event which drew in excess of 100,000 people.

Over the course of his Muay Thai career Parr defeated two of the all-time greats, Orono Ubon and Yodsanklai Fairtex, both tricky southpaws who handed the orthodox Parr losses before he was able to find paths to victory in subsequent rematches.

For all Parr’s skill and hard-won talent, it was the relentless heart of a true warrior which shone through. It was the venom within which defined him.

Across a fighting career which included a foray into the boxing world resulting in two titles, Parr would compete a remarkable 147 times over the course of a nearly 27-year career, winning ten titles and racking up a combined boxing and kickboxing record of 110 wins and 37 losses.

As recently as two years ago Parr was on an eight-fight winning streak while fighting in premier world kickboxing organisations at the age of 41.

The Gunslinger never truly achieved the fame he deserves within Australia due to the low profile of kickboxing, but within the combat sport world Parr’s name carries hefty weight.

Perhaps we can judge him by the company he keeps and those who respect him.

Parr is a friend of UFC commentator, comedian, martial artist and podcasting king Joe Rogan, while he can count the greatest mixed martial arts fighter of all time, Georges St-Pierre, among his list of sparring partners and friends.

Other friends and training partners include Luke Rockhold and Chris Weidman, both former UFC middleweight champions.

Recently Rockhold was training in Australia and was shocked by Parr’s daily routine, which still involves a five-mile run before he even begins his first session of the day.

This is the Muay Thai way – get up and run before training every day – and it is the old-school martial arts discipline which allowed John Wayne Parr to remain a phenomenal fighter into his 40s.

That discipline, combined with his own rock-solid mentality, led to his ability to throw every blow with bad intentions yet simultaneously maintain a furious pace to overwhelm people. Perhaps John Wayne’s most dangerous weapon was the ability to maintain his high-octane style for the entirety of a fight.

Robert Whittaker, Australia’s first UFC champion, recently declared sparring Parr as incredibly “awkward” due to the huge volume he puts out from all directions. His volume does not allow you to breathe or initiate any attacks on your terms.

In the end this was what led Parr to victory against Mundine. Despite not having fought under the Queensbury rules of boxing since 2003, Parr would overwhelm a fighter with more pure boxing talent by throwing furious, venomous hands as he trapped Mundine on the ropes over and over again. 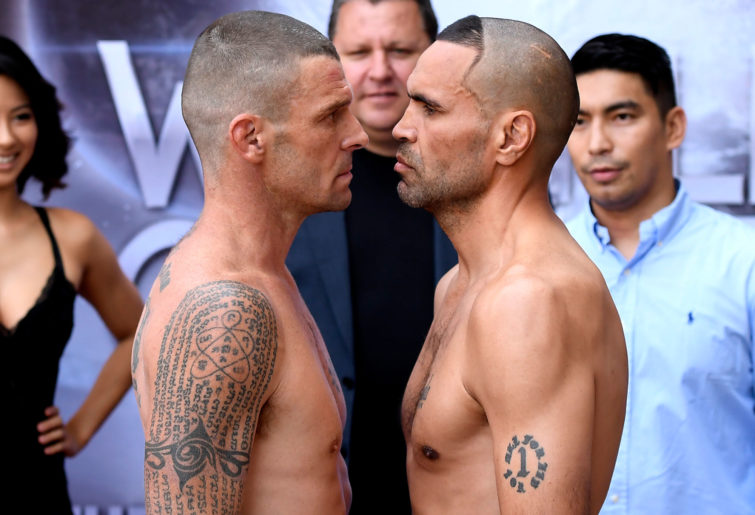 After the fight John Wayne announced his retirement because he needed a hip replacement. His body could no longer sustain the limits he had consistently pushed it beyond.

Parr additionally revealed that in training for the Mundine fight, with a hip in need of replacing, he had achieved a new lowest resting heartrate of 42 beats per minute. That he achieved a new level of fitness at 43 while carrying a serious injury encapsulates Parr’s mentality.

Parr deserved his final moment of glory, for his was a career and a life in which he has given everything there is to give.

In many ways The Gunslinger is the quintessential Australian sporting hero, the humble yet talented hard worker who possessed seemingly unparalleled grit and determination.

In a sense he had the misfortune to be one of the best in the world in a sport which lacks widespread appeal.

Yet in another sense he was blessed with one of the great sporting journeys and stories. Born in Australia, made in Thailand, John Wayne Parr’s legend will remain venomous until the end.

Boxing, like every other sport, dwindled during the COVID-19 lockdown.