But if Donald Trump – golf tragic himself – could relate to any player and trust him to deliver for his nation, it would be Tiger Woods: a kindred figure, larger than life and also no stranger to extreme controversy.

Until things turned south for Woods in November 2009, after his personal life spectacularly blew up in his face at Melbourne’s Crown, Woods had been an enthusiastic and frequent visitor to Melbourne. And while his golfing presence on the sandbelt has fallen away in recent years due to sustained injury and a sharply curtailed schedule, Woods clearly has forgotten none of those lessons taken from earlier in his career.

Woods was the best player from either side this week, and by some distance. His seventh career singles win is a Presidents Cup record, his performance made all the more remarkable by having carried the weight of 11 other players as team captain, in this format no small responsibility. 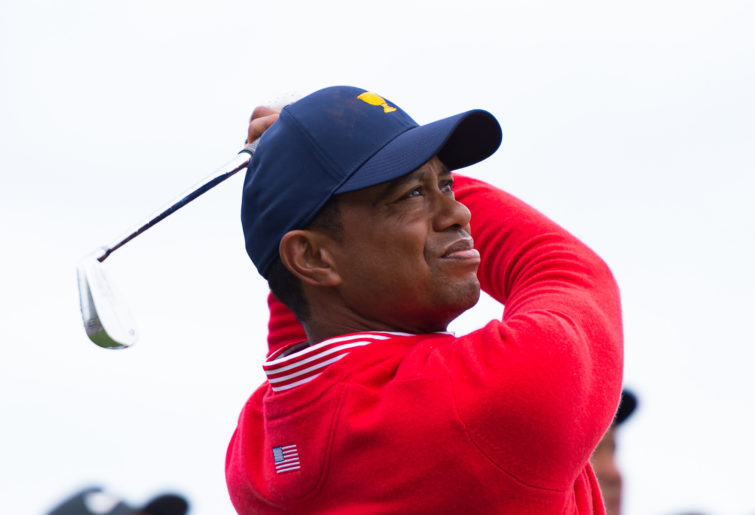 Courteous and respectful and showing grace and good humour when required, Woods drew people into Royal Melbourne in their thousands, recalling the grand old days of Australian golf, when there was a world-class tour and the world’s best players found reasons to travel Down Under, not reasons to avoid doing so.

International captain Ernie Els pitched his best player of the tournament, Mexico’s Abraham Ancer, into battle with Woods, both captains recognising the importance of seizing the early initiative. Ancer didn’t disgrace himself but was simply no match.

With the US 3.5 of the first four points on offer, the die was cast and the red team duly marched to an authoritative, come-from-behind win 16-14.

The final day of singles play had started nervously, the first four players all missing gettable birdie putts. That was fixed when bad boy Patrick Reed came through on his way to a sizzling start five under after seven holes.

There they were, the two biggest names of the week, Woods and Reed, lapping up the limelight.

Unlike thousands of fans who had worked themselves into a lather all week over the appearance of the Texan, Reed seemed completely unfazed by the drama of losing his regular bag man Kessler Karain, who was stood down by tournament organisers after an altercation with a fan on Saturday.

It would be naive not to have expected Reed to cop a few mouthfuls from fans after his lamentable bunker escapades in the Bahamas last week, but by Sunday the joke had well and truly worn thin.

Four and two over CT Pan, Reed conspired to win a few fans back, firstly by letting his golf do the talking and also when he generously conceded a birdie to Pan in front of an appreciative gallery on the 11th green.

While all matches are worth the same points, as always on the final day of singles a handful of pivotal contests shaped the final result.

Hideki Matsuyama led Tony Finau by four shots after ten holes, but a poor bunker shot on the 12th triggered a slide, and a careless three-putt on the 17th opened the door for Finau to halve a match the Internationals badly needed.

Young Chilean Joaquin Niemann led Patrick Cantlay after ten holes, but Cantlay powered home on the back. Meanwhile, Adam Scott, a leadership figure in the International team, hardly fired a shot in his match against Xander Schauffle, and a point that Els might have pencilled in for his side fell instead to his opponent.

As events developed into a putting contest during the afternoon the experience and composure within the US team shone through, with only Gary Woodland, four and three loser to Sungjae Im, failing to apply pressure in reverse.

The American onslaught also had the effect of taking the home crowd out of the equation, and while there were sporadic bursts of parochial excitement, the Internationals were never allowed to generate the type of buzz and momentum which spreads across a golf course like wildfire and feeds into inspired play from the remaining players.

With a mood of resignation hanging in the air, it was South Africa’s Louis Oosthuizen who suffered the indignity of his missed birdie putt on the 17th, securing the cup for the US. That would, however, underplay the effort of US veteran Matt Kuchar, who turned around a three-hole deficit at the turn.

Leaving the course on Saturday night, the consensus was that the Internationals needed to carry a lead larger than the 10-8 they had into the singles. And thus it proved, the team Woods described as “all my boys” grinding their opponents into the sandbelt on the final afternoon.

In the final wash-up only two Internationals notched a singles win: Australia’s Cameron Smith, a brave two and one winner over Justin Thomas, and impressive Korean youngster Im.

That wasn’t nearly enough for Els, who was left to rue his side’s soft finish on Friday when the Internationals didn’t quite turn the screws when the opportunity was there to shut the Americans out of the contest at the halfway point.

But as the vast crowds streamed out of the course, any disappointment must surely have been tempered by the fact they once again got to see the world’s greatest golfer grace a Melbourne golf course, a prospect that had seemed nigh impossible over the last few years.

In the end it was more than satisfying. Kuchar spoke for all the US players afterwards about how “cool” it was to play both for Woods as captain and alongside Woods as a teammate at the same time.

Cool it was. This Presidents Cup didn’t need the President. It had Tiger.

Laurent Hurtubise achieved what many players can only dream of. 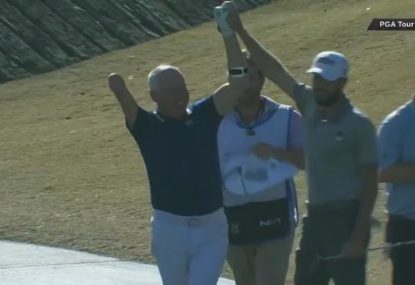