The Roar
19th December, 2019
4
Join the conversation
Advertisement
Write for The Roar

James Hooper reports that the Titans will land the forward on a three-year deal worth $2 million, despite his relative inexperience. Just days ago, it appeared a formality that the 19-year-old would head across to the Warriors on a four-year deal worth just under $3 million, but it appears he will see out next season with current club, before heading north to the Gold Coast in 2021.

Whether he actually agreed to a deal with the Warriors, or whether earlier reports were simply incorrect, is yet to be revealed.

The Orange-born Fa’asuamaleaui – who represents Samoa internationally – has played just five NRL matches and only made his debut in Round 16 of this year. But his impressive 197cm, 107kg frame and incredible defensive work – he missed two of 77 tackles in 2019 – has made him an incredibly hot commodity.

The 19-year-old joins Will Chambers, Brodie Croft, Curtis Scott, Solomone Kata and (potentially) Josh Addo-Carr in having left the Storm this offseason, giving Craig Bellamy plenty to ponder as he likely prepares for life after Cameron Smith at the end of next season. 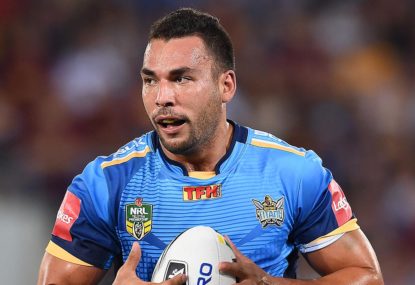 One of the worst-kept secrets in rugby league has been confirmed today, with the South Sydney Rabbitohs confirming the signing of Gold Coast forward Jai Arrow on a four-year deal.

Reports: Arrow accepts four-year deal with Souths, may move in time for 2020

Jai Arrow has told Gold Coast he will take up a lucrative four-year NRL deal with South Sydney from 2021.

Reports: Arrow accepts four-year deal with Souths, may move in time for 2020