From infighting, players leaving, underwhelming results and Izzy, there have been many body blows – but it wasn’t all bad. There were also some good points and plenty of ugly ones so, without further ado, let’s round up the good, the bad and the ugly on Australian rugby in 2019.

Defeating the All Blacks
There was one shining moment in 2019 and that was the 47-26 win over the All Blacks at the brand new Optus stadium in Perth. It was one of those games that seemed to come out of nowhere and was a delight to watch but, somehow, at the same time it was frustrating. Why couldn’t they play like this every game?

The highlight was Samu Kerevi’s break down the blindside and offload to Nic White for a try which included Samu giving Beauden Barrett a classic Maori sidestep. Tge man of the match was the vocal Perth crowd showing how supporting your team should be done.

Young guns and the Rugby Academy
For me, the biggest highlight in 2019 was the promise given to us from young Aussie rugby players. The under 20’s got to a World Championship final through power, pace and scintillating skills and, although they were bested by France 24–23 to narrowly miss the crown, it showed us that there is a lot to look forward to.

I also have to call out the Australian schools 18-14 defeat of New Zealand schools in Hamilton. Another brilliant and tight game with players across the park again showing skill and commitment. This was the fourth time they have bested New Zealand since 2008 so, again, a round of applause for our young blokes.

Now the challenge is converting these talented youngsters into future Super Rugby players and Wallabies – something we have not been so good at in the past. With the launch of the new International Rugby Academy of Australia (IRAA) in January 2020, we now have a proper development channel for these young players to take the next step. Let’s hope it works.

Australia got its man
After the humbling defeat to England at the World Cup, Michael Cheika fell on his sword and resigned as coach. The debate quickly came up about who the best option was, with a few names being thrown about and a number of people saying Eddie Jones ‘had to be’ the next coach – which was just ridiculous. He is still contracted to England and would cost an absolute motza to get him on board.

This is where I will salute Rugby Australia for doing their due diligence. Discussions with Dave Rennie had been underway for a while and he is definitely a high class coach who is worth getting on board.

He clearly has already started his thinking and planning for how he will shape the team and, although he does not have international coaching experience, all of those who have worked with him believe he is an excellent coach. He will be a very different coach to Michael Cheika and yes, he is a New Zealander – get over it.

This is a chance for him to build a new coaching team and bring in fresh thinking to the Wallabies set up which is sorely needed. He will have a long way to go to prove himself but, given the circumstances, he was the right choice.

The growing women’s game
The Wallaroos had their first Test series win on home soil against Japan this year, with the final game of the two-Test series being a 46-3 win at North Sydney oval. Although the results against New Zealand did not go their way, the skills, passion and commitment from the players is evident.

With the Super W entering its third season, there is a lot to like about women’s rugby in Australia and there is a lot of room for growth. More resources and promotion is needed for women’s rugby in Australia but, with players like player-of-the-year and Wallaroos captain Grace Hamilton leading the way, I am sure more people will start taking notice.

After all, we all know Aussie women are absolute world beaters across the board when it comes to world sport – they have been outperforming the men for years.

See ya, Izzy
Too much talk has gone on about Israel Folau and that is the point here. Everyone was up in arms about Rugby Australia settling for an undisclosed amount but, pull your heads in guys, this was a no-win scenario with the worst case being that it dragged on for years and years costing a truck load in legal fees, soaking up precious media attention and distracting the administration from their roles.

With the case settled we can finally move on.

Sure, it’s not great, but I can completely understand why a settlement was the best case given the scenario. It is not Rugby Australia’s place to take on a religious freedom case, it needs to focus on getting rugby back to where it needs to be. It is also a harsh lesson about the importance of contract terms – a social media clause should now be a standard part of any RA contract.

A final note – Izzy, mate, you really did so much damage to Australian rugby that it will take a long time to heal and the comments that you posted are outdated, tone deaf and dangerous. I believe you once said “I told Raelene if she felt the situation had become untenable – that I was hurting Rugby Australia, its sponsors and the Australian rugby community to such a degree that things couldn’t be worked through – I would walk away from my contract, immediately.” This turned out to be a lie, so please refer to your post for next steps.

Administration
Rugby Australia had its worst year yet – which is saying something considering recent times – with the Izzy scandal, poor results, a tenuous financial position as well as unrest from the grassroots. It was just blow after blow and I am sure Raelene Castle is regretting ever saying yes to taking the position as the CEO of Rugby Australia. It is key to remind yourself that Raelene only started her role in 2018 and a lot of issues were already there when she took the role and others were out of her control, but that is no excuse.

Now with the Izzy saga over and a new coach there is opportunity for the administration to get back to running the game properly. Can 2020 be a year for a refocus on actual rugby for Rugby Australia?

Results
The Wallabies finished the year with a 60 per cent win rate and an exit from the World Cup at the hands of a cocky-to-a-fault England. Michael Cheika never really changed his overall tactics and game plan since 2015 and good teams knew exactly how to stifle the Wallabies attack and break down their defence. While Cheika was a players’ coach with all members of the squad buying into his vision, in the end, he ran out of tactical ideas and it showed.

The biggest “WTF” coaching moment came in the World Cup game against Wales in Tokyo – which I was lucky enough to attend – when, for reasons beyond me and every fan at the stadium, Bernard Foley was selected to start. This suitably led to errors and an eventual loss, starting the Wallabies’ slide to a World Cup exit. What Cheika was thinking when he made this decision we will never know.

It is unfortunate that Cheika’s reign ended this way as he was a committed man to the Wallabies, his players and Australian rugby and he deserves respect. Unfortunately the history books will read 68 Tests at a very sub-par 50 per cent win rate.

Talent lost
With Australia’s exit in the World Cup, we said goodbye to a bunch of Wallabies stalwarts with legends David Pocock, Will Genia and Sekope Kepu all retiring. But it is the young talent drain that really hurts with Tolu Latu, Rory Arnold and Adam Coleman all moving overseas next year.

The one that really hurts is the loss of centre Samu Kerevi. Samu has been the team’s most dangerous attacking weapon over the last couple of years and highlights the issues a small, financially struggling nation like Australia has in a world market.

These players have a right to go and get the most money they can in a career where they are always one injury away from retirement, but we need to do better at player retention in the 2020’s.

TV rights
The biggest challenge for Rugby Australia over the next few months is TV rights and, true to form, it has already been a rocky ride. There is a war of words between the major parties with Foxtel threatening to sever its two-decade relationship with rugby union. This is something the administration must get right.

Optus apparently is in there but that would be a massive mistake and further alienate the sport from fans. The real problem here is access and they need to have free-to-air channels interested and at the table. This is key for the financial security and growth of the game in Australia.

In reality, I am expecting Foxtel and RA to reach an agreement eventually, but a man can dream of a world with free-to-air Super Rugby, Super W, Wallaroos and Wallabies games. A man can dream.

Finally, as this year closes, I want to highlight an inspirational rugby story that I have loved this year – Christian Lealiifano. 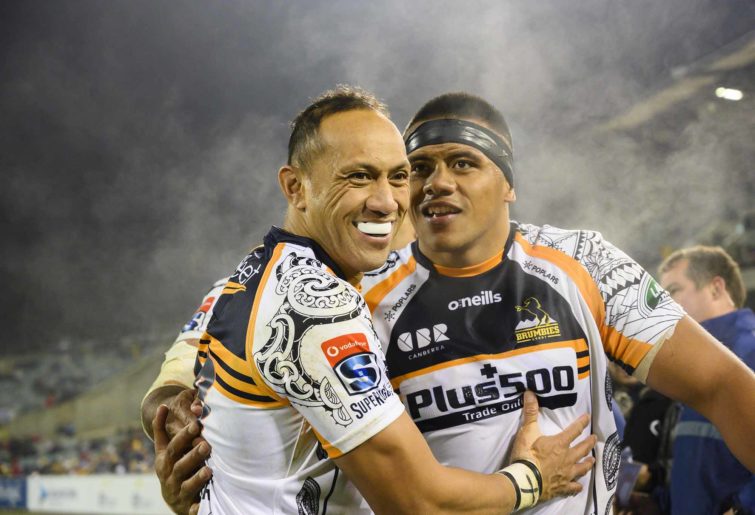 Christian’s return to the Wallabies fold three years after being diagnosed with leukemia in August 2016 was stirring. As a person, teammate, player and role model there is none better in Australian rugby.

You have to raise a glass to the man who quietly and strongly went through many dark places to come out the other side and make it back to Super Rugby, the Wallabies and a World Cup. Good luck playing in Japan’s top league mate – all the best.