The current scrum law requires the attacking hooker to ‘hook’ the ball but places no such requirement on his or her opposite number.

As per law 19.22, this allows the defending hooker to set up to push immediately when the ball enters the scrum. Thus the scrum law for a critical second or so permits the initial contest to be an eight-man versus seven-man contest, with the advantage going to the defending team.

The offset ball put-in may also subtly misalign the attacking scrum’s loosehead and add instability to the attacking side’s already compromised initial thrust. The offset put-in – routinely crooked – does not make up for the momentary disparity in pushing numbers. For evenly matched scrums where is the ‘advantage’ to which the referee refers when awarding the ball at a scrum?

My proposal is in two parts:

It is my hypothesis that these tweaks will greatly reduce the number of collapsed scrums. 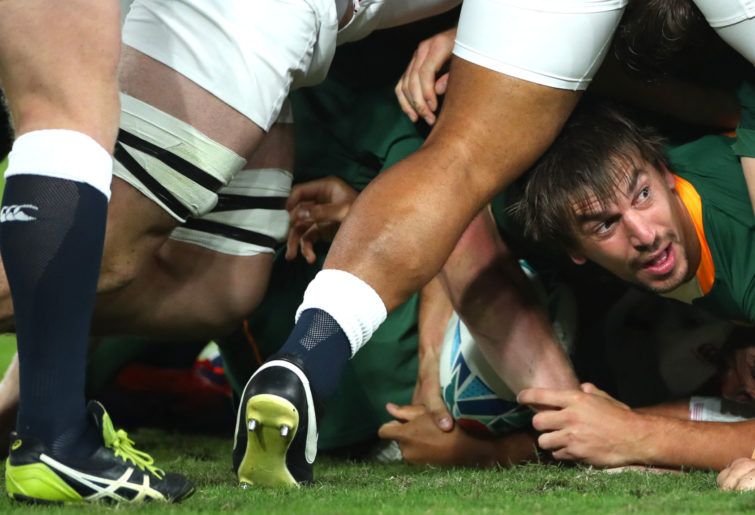 The second turns the two hookers into a stabilising central pillar for the scrum with the added benefit of promoting the physical safety of the hooker, the most injured player in the modern game.

Are these proposals viable? Requiring both hookers to at least nominally contest the put-in isn’t much to ask. Stabilise the scrum? A cursory internet search found top-level hookers routinely squat around 200 kilos. If they can, this also doesn’t seem much to ask, even if props are purposely diving, pulling down or boring in.

There is nothing sacred about the mechanics of a rugby union scrum. Yes, it would be different, but spectators wouldn’t notice. It would also be much easier for the referee to identify a less arbitrary and plausible cause for collapsed scrums – and award a penalty sanction – with no re-scrum option.

First, at the outset of my playing/hooking days (40 years ago) scrums were a different mess from today. Hooking was always a contest. A scrum might go down on a wet and slippery pitch. A tighthead win was a front-row victory. You won it fair and square by hooking or blocking your opposite’s hooking foot or on the other team’s put in, your opposite occasionally miss-striking and kicking it into your second row. The ball didn’t always come out, but scrum dominance wasn’t part of the vernacular.

Secondly, with the current laws I’ve noticed that in scrums involving less well-coached teams the defensive hookers will (naively?) bind in as if ready to hook and not participate in the initial shove. This was the case in the last match I refereed about two months ago. There were no collapsed scrums and none ever looked like going down. The match went on. Most of the rugby I watch isn’t that amateurish or evenly matched, so scrums collapse.

Perhaps there are statistics on scrum collapses – which team put the ball in when it collapsed, ball lost to dominant push-back by defensive team, which team was penalised et cetera. If such statistics exist, I would appreciate a reference. However, even if such statistics might provide indirect support for my hypothesis, nothing can replace trying these suggestions.

I like watching a good scrum contest. However, multiple resets culminating in an all too frequent arcane penalty are a pox on the game. The prospect of fewer scrum collapses, fewer faces in the dirt, fewer front-row injuries and a more fluid game make these modest proposals worth a try.