Around 11pm on Saturday night, it was still 27°C; maybe the hottest night over the last week and making the task of falling asleep impossible. So I did what I often did, and went back out to my office to start flicking channels.

As the TV comes back to life, I was stunned to see the BBL Sydney derby match still on – in fact, initially I thought I was seeing the start of the match replayed, with Thunder openers Usman Khawaja and English slogger Alex Hales getting ready to walk back out onto the Sydney Cricket ground.

Eventually, I notice the ‘LIVE’ watermark in the top corner and realise the game that I’d earlier given up on was still going. And what I was seeing was the Thunder preparing to walk out and win just the fourth Super Over in Big Bash League history.

And incredibly, the Sixers have now played in all four of them.

Back in BBL06, the 2016-17 season, the Sixers won through to another BBL Final by beating Brisbane in a Super Over, after both sides finished with 167 from their 20 overs.

In BBL04, they were on the receiving end. After they and the Melbourne Stars both made 150 from 20 overs, the Stars posted 0/19 and then took two Sixers wickets to keep them to 2/9. Attack being the best form of defence.

And the very first BBL Super Over came in BBL03. Perth and the Sixers made 153 from 20 overs, sending the game to overtime.

But the Sixers fell in a heap, losing 2 for 1 from four balls, the second wicket bringing their ‘innings’ to a premature end. Adam Voges hit the first ball he faced for four, and that was that.

Which brings us to back to the most recent edition of the Super Over, and I don’t mind admitting it, it came after a game I’d given up on.

The Sixers had their foot on the throat of the Thunder in their bowling innings, yet the Thunder still managed to get themselves to a very defendable 8/149.

Already this summer, the Sixers had lost two of the three games in which they chased a total; bowled out for a paltry 104 chasing Hobart’s 9/129, and becoming bogged down and well contained to 7/161 chasing Brisbane’s impressive 4/209. 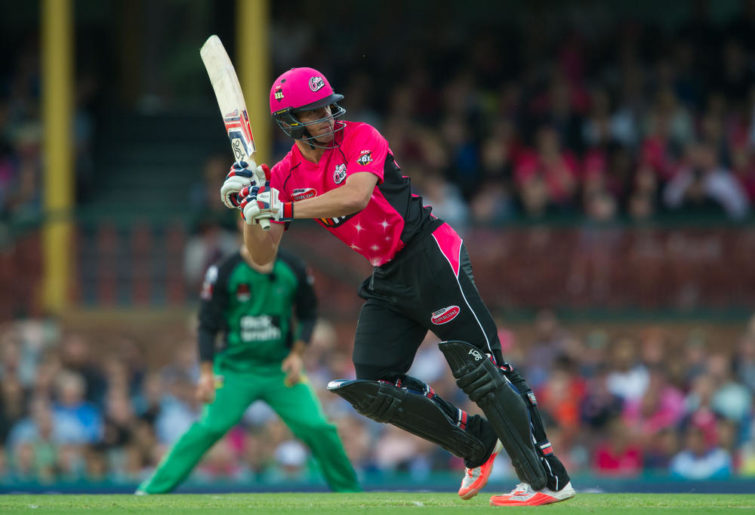 At 7/115 midway through the 16th over, the Thunder shouldn’t have got near 150 from the remaining 20-odd balls, yet here they were, well and truly back in the game and in a position they could win from.

So when the recalled Jack Edwards put a rank full-toss down the throat of mid-wicket for an at-times laborious 21-ball 17, the Sixers were in trouble at 5/110 in the 16th over. That was enough for me to call it; it was time for a shower or something else that wouldn’t end up is me mocking another blown Sixers run chase.

I obviously didn’t see it, but Moises Henriques falling the following over would only have further validated my decision. I did see how the Super Over played out though, and that was enough to convince me I needed to revisit what I chose to ignore earlier in the night.

And what I missed was a pretty incredible display of holding your nerve as the stakes only grow in size.

Coming in after Edwards’ brain fart, and with 21 balls to come, English allrounder Tom Curran managed to find some application that has been too often missing in the Sixers’ middle order in recent seasons.

Hitting his first three balls faced for four gave Curran the immediate confidence to go on with the job – so much so that Henriques was out off the next ball he faced, and Ben Dwarshius faced only three balls over three overs. Of those 21 balls to come when he came in, Curran faced all but four of them.

Into the last over, and with the Sixers still needing 16 to win, Curran started by putting Chris Tremain deep over the cow corner fence. Ten off five is suddenly a whole lot more gettable, to the point that Curran’s play and miss off the next ball didn’t matter so much.

Twos off the third and fourth ball left six to get from the final two deliveries, and that job was made easier when Curran threw his hands at a low full-toss, piercing the field and finding the cover boundary. Two off the last ball required.

“Super Over anyone,” I see the ESPNCricInfo ball-by-ball commentator threw up, presciently, before the last ball.

If anyone was going to win this, it was Curran, but he hit the final delivery a little too well, burning himself on the return run after hitting the ball pretty much straight to the man and deep square. Super Over, indeed.

Curran and Henriques went straight back out for the Sixers, but Curran must’ve thought all his luck had run out when he nicked off first ball.

A wide and a single put Henriques on strike, and though he’s never struck me as a chronic exponent of the ramp shot, he walked across outside off and popped the third ball over short fine for four, and then topped it by attempting the same thing fifth ball, only to somehow get it over third man – for six! And it may have come off the back of the bat.

After Henriques also ran himself out off the final ball, the Thunder needed 17 to win. Re-enter Curran.

A series of well-placed yorkers, low full-tosses, and deft slower balls saw Khawaja and Hales manage just five off the first four balls, and needing 12 off two. No chance. 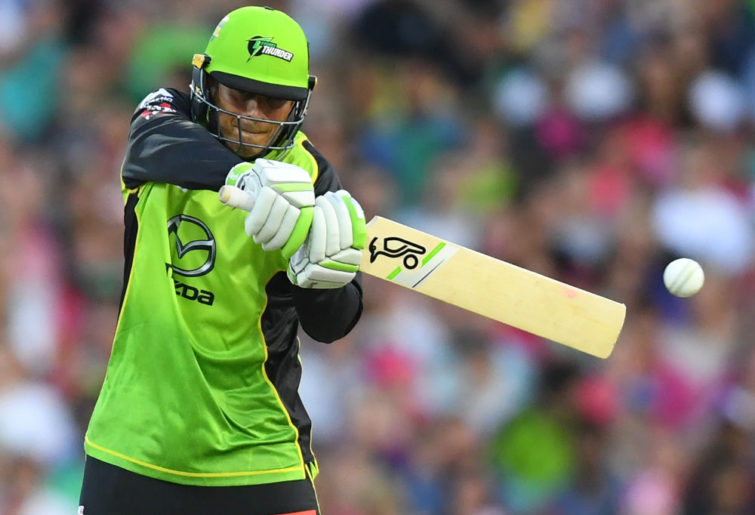 The Thunder’s Usman Khawaja plays a shot at the SCG. (AAP Image/David Moir)

Then Hales swung hard and free and he got onto one, putting Curran back over his head into the sightscreen.

Six to win off the last ball, and Curran puts the final ball up full and wide; Hales is good enough to get it away for four, but that’s it. Curran the hero now with ball, too.

In truth, it’s moments of supreme skill like this that make Twenty20 cricket so watchable and so entertaining.

Test cricket and ODIs have different sorts of pressure and can be every bit as nerve-wracking at the end, but through the Super Over, only Twenty20 can produce this kind of in-the-moment one-on-one intensity.

And Twenty20 games are a dime-a-dozen. I’ve forgotten most of the games played this summer in BBL09 already. But Super Over games can live on like few other Twenty20 games can.

And it’s all because of way the individual – Tom Curran, in this case – keeps their head while all other lose theirs.