Where is Australian men's tennis going over the next decade?

As the 2010 decade comes to a close, so too does another chapter in Australian men’s tennis. And the next decade promises a lot of intrigue.

The 2010s were scarce in terms of on-court success. Instead, this era was littered with false dawns like Bernard Tomic’s early promise and then equally quick downfall, and signs of promise encapsulated by Alex de Minaur’s emergence and Nick Kyrgios’ run at Wimbledon in 2014 and the Australian Open in 2015.

However, unlike the start of the decade when Bernard Tomic was the main hope for Australian’s men tennis, this turn of the decade has the Australian men well placed to go a few steps further and raise some hope for success in the next few years.

Australia has a solid core of players that could replicate the success of the late 1990s and early 2000s with Lleyton Hewitt, Pat Rafter and Mark Philippoussis.

Here are the main contenders to lead Australia on the men’s circuit in the coming years.

5. Thanasi Kokkinakis
Kokkinakis burst onto the scene during the 2014 Australian Open alongside Kyrgios and both were tipped at the time to dominate Australian men’s tennis for the coming years. Unfortunately, this has not come into fruition yet due to the lingering injuries that have plagued the young South Australian’s career. 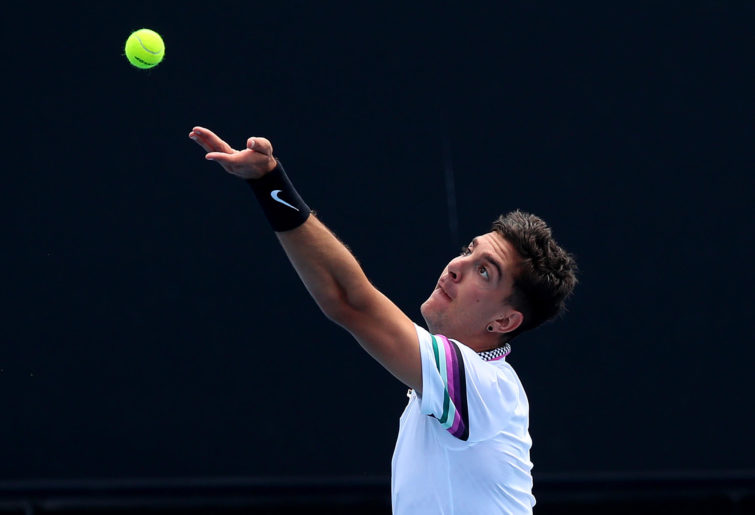 Kokkinakis has the talent, evident in his wins over Tomas Berdych in 2017 to reach in his first ATP final or his comeback victory over arguably the greatest player of all time in Roger Federer at Miami in 2018 after the Swiss had just come off winning the Aussie Open.

The lingering issue for the majority of Kokkinakis’ career has been his body, as there have been far too many matches where he has been forced to either retire or lost the match due to injury. Had it not been for his body constantly letting him down, he would definitely be placed a lot higher on this list.

However, time is on Kokkinakis’ side. And at the age of 23, he still has many years left in him to steady his career. Blessed with powerful ground strokes on both sides and strong athleticism, he has the weapons to succeed. But for 2020 at least, Kokkinakis’ first focus must be on playing consistently and staying injury free.

By missing so many matches compared to others on this list, it’s difficult to gauge where Kokkinakis’ career will finish but at the bare minimum he has the potential to succeed at tour level, targeting the ATP 250/500 or possibly 1000s if not the majors due to the gruelling nature of grand slam play.

4. Jordan Thompson
Jordan Thompson is the oldest player on this list at the age of 25 and has been on tour for a while now. While reaching his highest singles ranking last year in July at 43, Thompson has the heart and skills to try and break into the top 30. What the Aussie lacks in talent and skill compared to his compatriots on this list, he makes up for in heart as evident by his hard-fought victory over Grigor Dimitrov at Miami in 2019.

Thompson’s career, though, has always been underlined by his struggles to ever make the second week of a major. While he has managed some victories here and there such as against Andy Murray in 2017, Thompson has struggled consistently when coming up against the top-tier players and his determination and grit can only take him so far at this level.

At the age of 25, Thompson’s window for success at tour level is smaller than the others on this list. Thompson should be focusing on the Davis Cup instead. While being behind Kyrgios and De Minaur in the singles roster, Thompson is definitely a player that any country would wish for as the first-change singles player. Thompson is very capable doubles player and can become a stalwart in the Australian Davis Cup team’s doubles slot.

At an individual level, Thompson’s focus for 2020 should be reaching the second week of a major or having a deep run at tour level. A title at 250/500 level may be tough but is possible if a lot goes his way, but perhaps winning a Masters 1000 event might be too far a step.

3. Nick Kyrgios
Controversial, supremely talented and box office. Kyrgios is a name on this list that needs no further introduction. 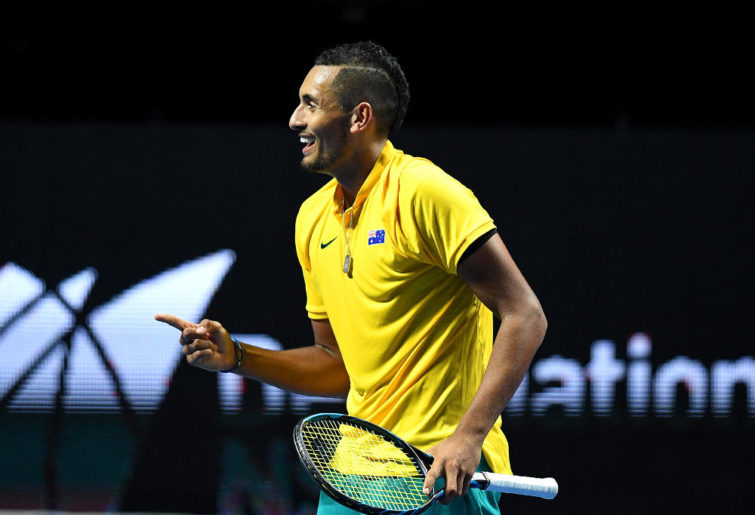 Possessing a booming serve, fluid athleticism for his height and powerful ground strokes, there’s no doubting this man’s talent. However, unlike his friend Kokkinakis, the issue for Kyrgios is not his body but rather his mind.

Few can boast a winning record against Novak Djokovic or even say that they were able to beat Rafael Nadal, Federer and Djokovic on their first attempt, but Kyrgios ticks all those boxes on his list of accomplishments.

Kyrgios’ issues are well known. Yes, he is box office and draws in a crowd but the question Kyrgios will need to ask himself is at what cost to his own career? Kyrgios has frequently stated his lack of passion for the game, which is no excuse for the lack of effort on court.

His head is the only thing that stops Kyrgios from sitting higher on this list. Coming into 2020, Kyrgios should be targeting a run into the second week of a major and perhaps even looking at a semi-final appearance at either Wimbledon or the Aussie Open, given these are the tournaments that suit his game.

Winning a few tour-level titles – whether it be at 250/500 or even 1000 events – is also well within his reach, after which Kyrgios can then continue to build into the next decade.

If he sorts out his mind, major success is achievable for Kyrgios in the next decade. But that’s a huge if.

2. Alexei Popyrin
The youngest player on this list, Popyrin exploded onto the scene by knocking out Dominic Thiem in the 2019 Australian Open. Granted, Thiem did retire but Popyrin played well enough to earn his two-set lead before the retirement.

En route, he also beat former quarter-finalist Mischa Zverev in straight sets and he backed up this performance with further wins at major level at the French Open, Wimbledon and US Open, where he was subsequently eliminated from all three majors in the second round by quality opponents.

Similar to Kyrgios, while Popyrin possesses a powerful forehand and a strong serve, he will need to continue to build on his back hand, match awareness and athleticism, which will come with more matches.

While it may also seem controversial that Popyrin is placed higher on this list than Kyrgios, this article looks at who will carry Australian men’s tennis in the long run. And given Kyrgios’ headspace and lack of passion for the sport, something that is tough to fix, it may be that Australia’s long-term success is a safer bet with Popyrin, whose determination and heart cannot be questioned. So far in his career, he has managed to avoid any controversies – unlike those before him in Kyrgios and Tomic.

With a breakthrough year in 2019, where he was nominated for ATP newcomer of the year by breaking into the top 100, Popyrin has a platform to build on his career.

Popyrin should target more major wins and possibly a deep run at a ATP 250/500 level in 2020. The second week of a slam or a deep run at a 1000 event isn’t beyond the realms of possibility.

While not possessing the power of Kyrgios or others on the list, de Minaur makes up for it in his heart and dogged determination. The year 2019 did come as a breakthrough year for the young Aussie as he managed to reach the second week at a major for the first time at the US Open, where he beat Kei Nishikori in four sets. 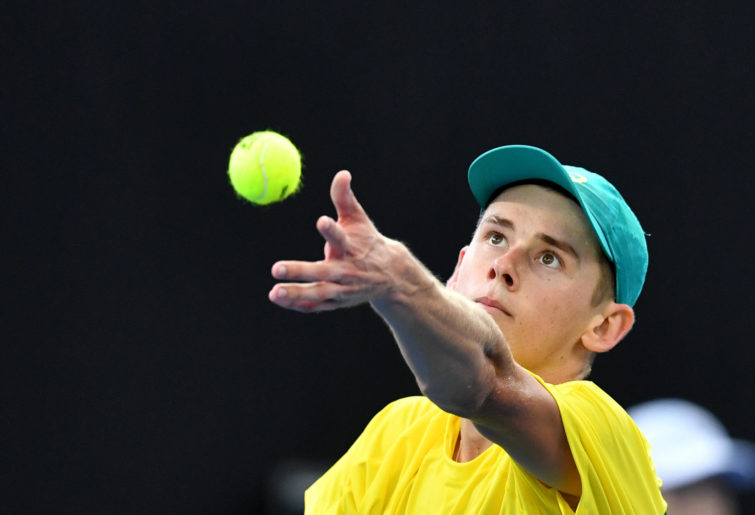 Alex de Minaur has all the foundations needed to succeed over the next decade. He has experience in abundance given his consistent appearances at majors. There can be no doubting his ability after three tour titles.

However, critics have noted that like his mentor Lleyton Hewitt before him, de Minaur’s defensive abilities need to be balanced out by offensive weapons. The young gun possesses an underrated forehand and a solid first serve. An area of improvement for de Minaur would be his back hand and his second serve, and if he could add a bit more pace and consistency into both shots, expect his rise to be even more rapid.

Like counter-punchers and defensive players before him, questions have been raised about how long his body can hold up. But right now, those concerns have been quelled.

With a solid foundation established in 2019, de Minaur should be targeting more second-week appearances at major level and looking at adding to his three tour titles. With three ATP 250 titles to his name, progression would truly be signalled for de Minaur with an ATP 500 or 1000 title.

Winning a major in 2020 would be tough for the speedy Aussie given the strength of the top 20, but beyond 2020, de Minaur should be targeting a semi-final appearances possibly as early as 2021 before looking at being a grand slam contender in the years after.

Missing from this list are players such as Alex Bolt, James Duckworth and John Millman, who are all capable of victories here and there against the top-tier players but are all older than 25 so are unlikely to dominate over the next decade.

While individual success can never be guaranteed, the end of the 2010s brought a sense of optimism with Popyrin, de Minaur and even Kyrgios setting up a foundation to launch from over the next few years.

Australian men’s tennis has a core that is capable of contending for the Davis Cup, especially given it’s a platform that Kyrgios seems to strive in more consistently and shows more devotion towards. With de Minaur leading the charge and Popyrin looking to take the next step in his career, the next decade promises more than what the last one delivered.