These are the names that first spring to mind when you think about Sydney FC’s success in a season during which they steamroll opponent after opponent and have already stormed to a nine-point lead by the turn of the year.

Although those stars might be deservingly taking all the plaudits, there is one person who has quietly become one of the most important components of the team but receives very little recognition from the public: Luke Brattan.

Brattan joined from Melbourne City in the preseason to replace Joshua Brillante, who moved the other way – though it was not officially a swap deal. After playing in an attacking midfield position at City, where he was required to get into the box and contribute offensively, this season Brattan has had to switch his game to become the initiator of those attacks rather than the one getting on the end of it.

“He’s been fantastic all year,” Corica said. “I think he’s been one of our best players … for me that’s his role and he does a great job there for us and he’s playing really well.”

Although it might sound crazy at first given some of the names at the club, the stats back up Corica’s bold claim that Brattan is one of the best. Compared to his A-League colleagues, Brattan excels at a large majority of the crucial measurements needed for a central midfielder. When it comes to getting the ball into the final third, Brattan has been the best at it this season.

It has clearly come with a trade-off with a far lower attacking contribution than usual, but it is a price that Corica is happy to make given some of the players he has at his disposal in and around the box. 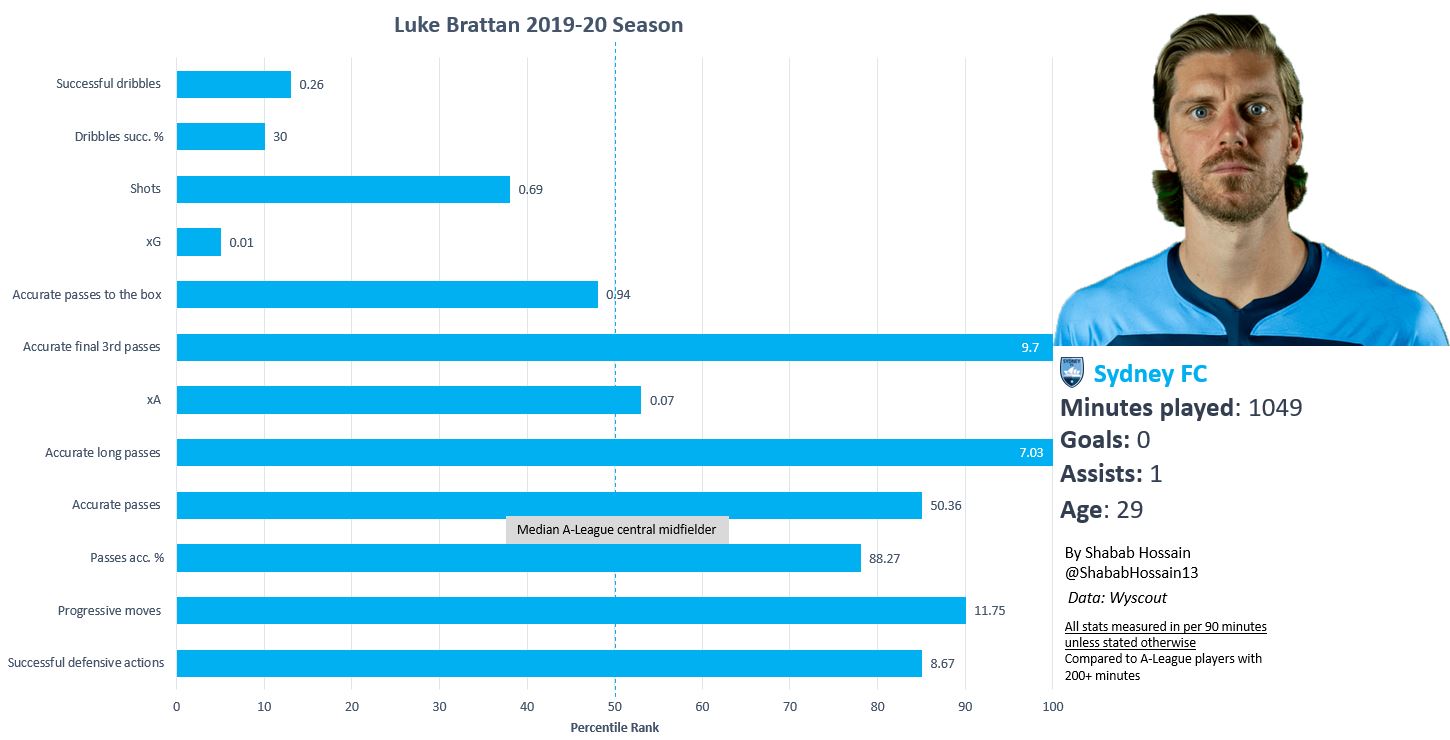 As the numbers reflect, Brattan’s enormous range of passing is a big part of why he has been given the keys to the Sydney engine. Receiving the ball from the centre backs, Brattan attempts to catch opposition defences sleeping with long passes behind the defence.

He leads the league when it comes to successful long passes per 90 minutes, with an astonishing seven passes emphasising his capacity to play the aerial ball to devastating effect.

The clip above shows just two examples of how Brattan’s passing can create opportunities for Sydney from seemingly harmless positions. Especially with the pace of the likes of Barbarouses and Trent Buhagiar off the bench, there is plenty to aim for the 29-year-old.

As well as showing off his spectacular passing ability, the video also shows another aspect to Brattan’s game: his awareness both on and off the ball to start attacks.

Brattan’s pass to Rhyan Grant for the only goal against the Mariners was the result of an immediate realisation that Central Coast had not retreated back into position from a foul, giving him an opportunity to unleash the rightback on the flank.

Defensively, Brattan reads the game exceptionally well, which means he can turn a match in a matter of moments. An interception in their own half can all of a sudden result on a goal in the other end.

With Grant’s natural instinct to go forward whenever he can, it is even more important to have a disciplined midfielder like Brattan who is prepared to cover for those runs. Brattan has more successful defensive actions than 85 per cent of A-League midfielders, showing that he is an active defender that works perfectly with Grant.

Although Brattan has shown a propensity for the long ball behind the defence, he is also capable of slotting in between the centre backs to operate as a third centre back to help build up play in possession.

This is a tactic that has gained a lot more prominence in the past few years, with even highly respected manager Jose Mourinho saying that any good side should always play out from the back with three in the first line. With three, it makes it far harder for opposition defences to outnumber them when pressing and, including the goalkeeper, there should always be someone available to pass it towards.

While Melbourne City like to invert their fullbacks for the same purpose, Corica has decided he would rather Brattan’s composed passing in that position instead. Considering that Brattan has a passing accuracy rate of 88 per cent, meaning only one in every ten passes is going astray, it is clearly something that is working for Sydney.

It’s yet to be seen whether Brattan will begin to be appreciated as much as Ninkovic or Le Fondre as the season goes on. Regardless, he is the hidden star of Sydney FC.