There may be a variation on where a given stripe is to be positioned, maybe a new colour added to the away strip or perhaps a Lazarus act on a jersey from yesteryear.

But these events tend to be a variation on a familiar theme – which is what I was inclined to write the Newcastle Knights’ 2020 jersey reveal off as.

Because, as far as the actual home shirt goes, it’s exactly the same as the 2019 version.

Seriously, have a gander.

Notice any difference at all in that shirt compared to the one Mitchell Pearce kissed on that sweet, sweet night in May 2019?

Well, no – but that’s actually the point.

“The home jumper has not changed from last year,” a Knights release read.

“We listened to your feedback and you loved the throwback to yesteryear, modelled on the club’s heritage jumper.”

Now I’ve been pretty vocal on the subject of NRL jerseys over the years.

An NRL jersey rant to get off my chest (again)

My primary concern is pretty simple: they cost way too much.

The going rate for years now has been $160 for a jersey that may be a replica of the space-age kit the blokes on the pitch – elite athletes slamming into one another at terrifying pace and with inhuman force – are wearing but that someone in the stands just does not need to be that futuristic.

What’s more, that’s a lot of money to spend on a shirt that is out of style less than 12 months later when the club updates it.

Well, I’ve got to hand it to the Knights. They’ve absolutely nailed it on this one.

By having the same jersey two years in a row, they’re actually giving the fans a win, rather than making a quick buck.

And it is a quick buck – a short-term way to make money that undermines longer-term possibilities.

Because a stadium full of people wearing relevant home jerseys is a way better sell to a potential sponsor than that same stadium with most of the fans wearing a jersey repping businesses that paid to be on the shirt in the ‘90s. 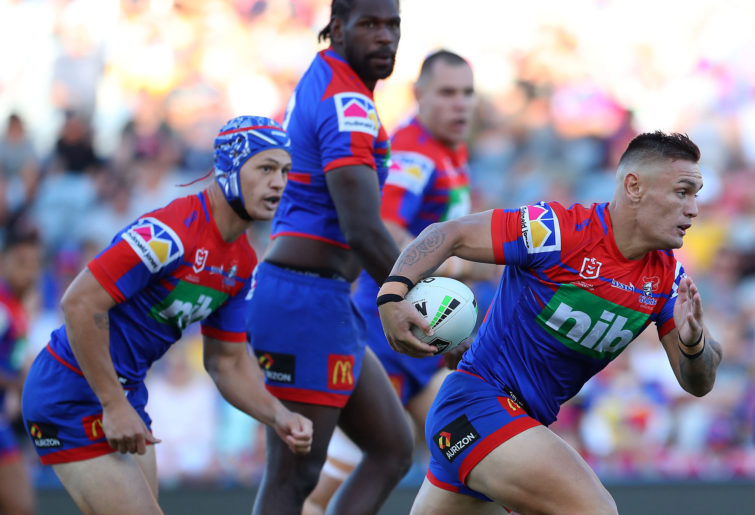 It’s not quite the $99.95 price tag I’ve been pitching for years – although it was that amount for a 12-hour Black Friday sale in late November – but a permanent $30 markdown is noteworthy.

Newcastle aren’t the only club who have decided to take $30 off last year’s asking price either, with the Panthers also setting their 2020 jerseys at $129.95.

What’s more, it appears the lower price is working well, with the both clubs having sold out on a number of sizes.

Ultimately though, after moaning about expensive jerseys for years, I really do need to pay credit where it’s due. So well done to the Knights and Panthers – great show of respect for your fans.

Here’s hoping these two clubs lead the way in jersey sales for 2020 and provide some hard data for the rest of the league that a $160 jersey is not only too expensive for the average punter, it results in fewer sales and, thus, ultimately less cash in the coffers.