The farcical disregard of no-balls by international umpires was exposed again yesterday as James Pattinson overstepped repeatedly but was only called for a no-ball after dismissing a New Zealand batsman.

Television replays showed Pattinson delivered four no-balls, which all went uncalled by the umpire, shortly before dismissing debutant Glenn Phillips in the third Test at the SCG.

Phillips was then reprieved when the third umpire discovered Pattinson had overstepped. By not calling Pattinson’s earlier no-balls, the umpire did not give the seamer a chance to correct his run-up and avoid this costly mistake.

This situation was reminiscent of the comical scenario that unfolded in Australia’s previous Test series against Pakistan.

Channel Seven exposed the fact that, inside just two sessions of the first Test against Pakistan, a whopping 21 no-balls were missed by the umpires. This added weight to the popular theory that umpires now rarely take heed of where the bowler’s front foot lands.

While Pattinson’s wicket off a no-ball was not a pivotal moment in the Test – Australia were cruising – it is part of a major issue in international cricket. 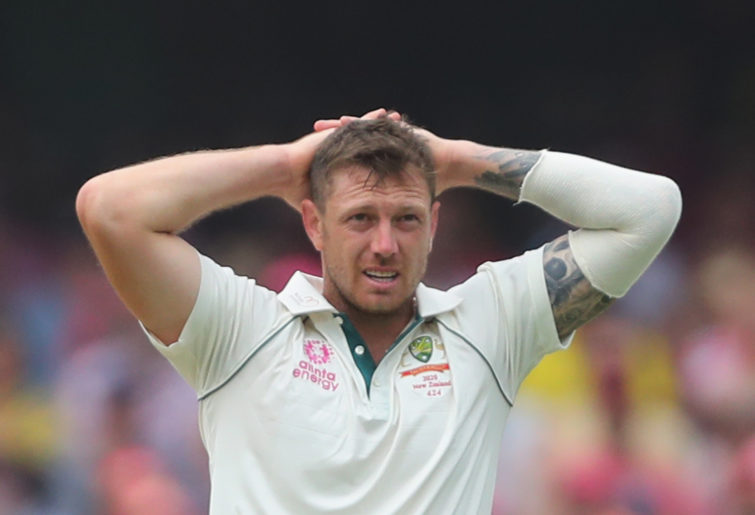 On Saturday, English quick Stuart Broad dismissed South African Rassie van der Dussen off what turned out to be a no-ball on replay. The host broadcaster uncovered video evidence the English bowlers had been overstepping constantly, without being punished, in the lead-up to that incident.

“I’m not having it for one minute that umpires are looking down at that front line,” Ponting said on the live television coverage of the SCG Test. “They are not looking at the line, they are looking at the striker’s end only. For mine that’s not good enough, it’s part of umpiring and part of what comes with the job.”

In the T20I series between India and the West Indies, the third umpire was tasked with monitoring each delivery to check for no-balls. The third umpire intervened on three occasions when no-balls went undetected, immediately communicating this to the on-field umpires.

This is a common-sense approach that should have been introduced a long time ago. The ICC for many years now has had the necessary technology to implement such a system but have been reticent to do so.

The Pattinson no-ball was one of three pieces of fortune yesterday for Phillips, who showed evidence of generous talent during his knock of 52. A gorgeous straight drive for four off Mitchell Starc and a thunderous pull shot for six off Pat Cummins were two of the highlights of the day.

Yet NZ still wasted a strong position early on day three to leave themselves staring at defeat and a 0-3 series scoreline. At 1-117 the Kiwis were beginning to apply pressure to the Aussie attack. The home quicks were getting little out of the deck and the visiting batsmen were playing spinner Nathan Lyon well.

But Lyon stayed patient and managed to skid one through the defences of Jeet Raval (31), trapping him LBW and triggering a collapse. Two balls later opener Tom Latham (49) donated his wicket by chipping a Starc delivery straight to mid-on.

Veteran Ross Taylor was in an aggressive mood, cantering to 22 from 19 balls before he too was caught LBW, this time by Cummins. When wicketkeeper BJ Watling dragged on against Starc for 9, and then all-rounder Colin de Grandhomme (20) ran himself out, the Kiwi resistance was well and truly over.

They finished on just 251, handing Australia a 203-run lead, which the home side increased to 243 by stumps. Openers David Warner (23*) and Joe Burns (16*) steered Australia to the close of play.

Australia will aim to declare some time during the second session tomorrow. It shapes as an important day for the likes of Burns, Travis Head and Matt Wade, who will be keen to shore up their positions ahead of Australia’s next Test series in Bangladesh in June.