Smokin’ Joe Burrow is college football’s man of the hour

After entering the 2019 college football season as a fringe NFL draft prospect, Burrow transformed into not just a Heisman Trophy winner and a certain first-round pick, but the consensus number one overall pick in April’s NFL draft.

Originally enrolling at Ohio State in 2015, Burrow red-shirted that same season and threw only 39 passes during the 2016 and 2017 seasons, serving as the backup to veteran JT Barrett.

After seeing the writing on the wall when then Ohio State head coach Urban Meyer gave the nod to emerging quarterback Dwayne Haskins over him, Burrow transferred to LSU in the spring of 2018.

The move left many pundits perplexed, with LSU cruelly known in college football vernacular as the place where quarterbacks go to die.

Burrow’s play has killed that theory, with his rapid and surprising improvement from his first season in Baton Rouge in 2018 to 2019 almost beyond comprehension.

In 12 games in 2018, Burrow threw 12 touchdowns, four interceptions and finished with a pass completion percentage above 70 just three times during the regular season. 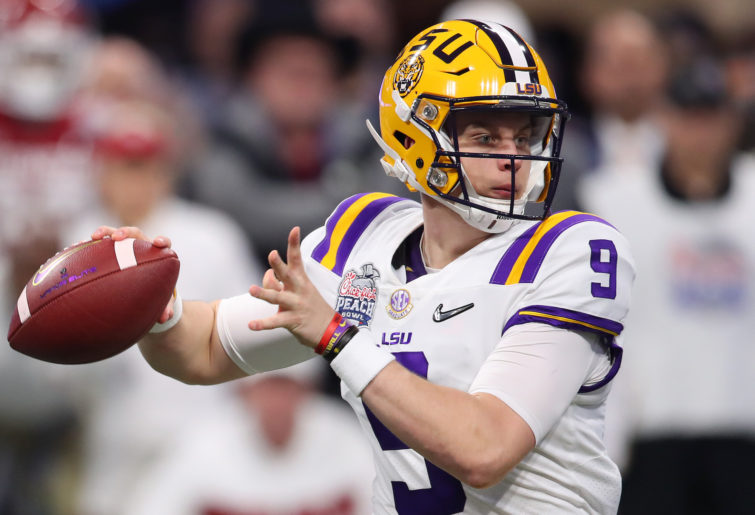 In only 94 more pass attempts in 2019, Burrow’s touchdown numbers quadrupled to 48, with six interceptions. Burrow’s lowest pass completion percentage number of 71.1 came in a game against Utah State in which Burrow threw five touchdowns.

When ESPN’s draft guru Mel Kiper Jr was asked if he had seen a comparable jump from one year to the next in all his years of scouting college football, his response was immediate.

“No, it’s never happened before, and it never will again I don’t think,” Kiper said on ESPN’s First Draft podcast in December.

Anybody who watched Burrow and his Tigers dazzle in the college football playoff semi-final against Oklahoma – a game in which Burrow tied the college football record for most passing touchdowns in a bowl game with seven before halftime – could only be left with the same conclusion.

“Really wasn’t on the radar at the beginning of this year as an early round guy, but he’s got some skills and has answered every question. Looks like the kind of guy you want as a franchise-type guy.”

If Burrow and the Tigers’ 2019 season is to culminate with a national championship title when LSU face reigning champion Clemson on Tuesday afternoon (AEDT), the story of Joe Burrow will further etch itself into college football folklore, to be told and passed down through the future generations of LSU fans.