While this quote from the late 1980s rom-com is about being in a relationship, playing for an NRL club is very much like being in a marriage.

At the same time as Jai Arrow’s engagement to the Rabbitohs has been announced, his marriage with the Gold Coast Titans has come to an end. All that is being decided now is when he actually leaves.

While reports say Arrow’s move to Redfern is imminent, the Titans will only release him to South Sydney immediately if they get enough in return.

So what we are now seeing play out is the negotiation process. Rabbitohs CEO Shane Richardson is clear that his club is trying to get Arrow to Redfern ASAP, while coach Justin Holbrook’s language conveys that the Titans are open to a deal but there has been no negotiation to this point.

“I know there’s been a lot of talk around … From my point of view I’ve got Jai here for this season and that’s what I’m planning on. And if anything happens elsewhere I don’t know that at this stage. We haven’t had any specific player been mentioned to us.”

The key thing that Holbrook has said, however, is this:

“We’re not just going to let him go.”

So the ball is now in the Rabbitohs’ court. They’ve got to put together a deal that will get the Titans to agree to release Arrow immediately. The names of Dane Gagai and Alex Johnston have been bandied around as possible bait. However, those players also have to agree to the deal, adding further complexity.

But, even with some compensation, why would a struggling club like the Titans agree to release a player of the high calibre of Arrow?

It’s simple, really. While Jai Arrow’s relationship with the Titans is clearly not dreadful, he has made the decision to go to the Rabbitohs on a four-year deal. So – in relationship terms – he is breaking up with the Gold Coast club to take up with his new flame.

Arrow has effectively delivered the awful break-up talk to Titans coach Justin Holbrook and chief executive Steve Mitchell: “It’s not you, it’s me”.

“You’re perfect in every way, just not for me.”

No-one wants to hear these sort of platitudes, especially when they were really invested in the relationship.

But that’s life, especially if you’re a club like the Titans. It is going to be harder for them to keep star players, especially with the season they just had. They’ve heard it all before.

The problem is that while everyone knows Jai is dumping Justin to move in with Wayne, right now he’s still going to be sleeping on Gold Coast’s couch for the 2020 season.

That is far from an ideal situation.

While both parties are saying all the right things – with Titans CEO Mitchell saying, “Right now our focus is totally on the season ahead, and having Jai playing a significant role in a successful season for the Titans,” and Arrow stating, “I am pleased to finally have my future settled, and can now continue preseason training fully focused on delivering a successful season for Titans Members and fans in 2020” – the reality is they’ve broken up. Even if it doesn’t get ugly, it isn’t going to be fun.

And it probably will get ugly.

Just like it is always best to rip the band-aid right off, once a relationship has ended it is best for both parties to go their separate ways.

I believe the appropriate Zen proverb is “let go or be dragged”.

Sometimes that means letting go of something you really wanted in order to steady the ship.

When Ivan Cleary started his tenure at Wests Tigers in 2017, it was during the club’s efforts to retain Mitch Moses, James Tedesco, Aaron Woods and Luke Brooks. Cleary stated that he wanted to establish ASAP who was “on the bus” – in simpler terms, who actually wanted to stay on the team.

His feeling was that, regardless of how good the player was, if they weren’t going to buy into him and where he was taking the club, he’d prefer that they weren’t there at all. Moses was duly released from the club in May of that year.

While Tedesco and Woods played out the season in spite of signing elsewhere, the Tigers’ results for the season spoke of club disunity as they finished 14th with just seven wins. In 2018, with what looked like a much weaker roster, they won 12 matches and just missed the finals.

You can guarantee the Titans will know that – like Tedesco, Woods, Angus Crichton and Anthony Milford did for their previous clubs – Jai Arrow is a professional and will do his best for them while he is there. 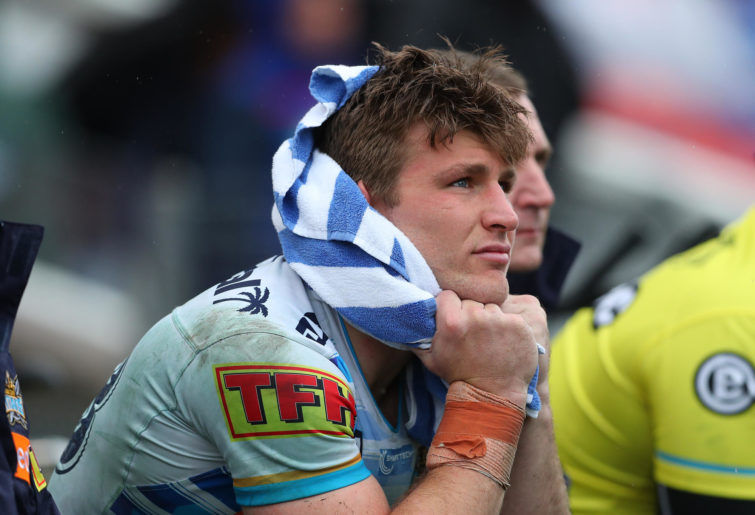 However, they’ll all know he’s going. There is no love anymore. It’s purely business and his teammates will know it.

They know they’ll be playing next to a bloke who doesn’t want to be there anymore. As much as Craig Bellamy has done his best to counter it, rugby league isn’t played by machines or robots. It is played by humans with human emotions. Players want to have teammates who are committed to the same team as they are. While the results are good it doesn’t matter as much. However, when they are bad – and the Titans have only won just over a quarter of their matches over the last three seasons – there will be friction. The only question is how much.

This friction could really come to a head if the soon-to-depart player plays well at representative level but is seen to be putting in lesser performances for the club.

Sure, if you were a club that might possibly challenge for the premiership this season, keeping the likes of Arrow around could be worthwhile.

However, if you are a club like the Titans that is clearly in – let’s be polite now – rebuild mode, it makes far more sense to be starting that process with players who are committed to the club. Or at least not committed elsewhere.

All that has to happen now is for the Rabbitohs to come to the party and give the Titans a deal that doesn’t make them a complete bitch.

Over to you, Shane.