Was VAR a blessing or a curse in the Mariners' win over Victory?

It was football, just not as we knew it, as VAR somehow came to Central Coast Mariners’ rescue in a truly bonkers finish to their 3-2 win over Melbourne Victory in Gosford last night.

Let’s rip the lid off this thing and get stuck in: was yesterday’s incredible finish at Central Coast Stadium entertaining because of Video Assistant Refereeing, or in spite of it?

Let’s put it another way. Would Kye Rowles’ disallowed goal have stood in the pre-VAR era?

Would substitute Matt Simon’s first penalty shout – when he put his body across James Donachie’s and then tumbled under the weight of the Victory defender’s challenge – have been awarded if there was no VAR?

Having had one penalty shout ignored by the VAR, were the Mariners subsequently not the beneficiaries when referee Kurt Ams awarded a free-kick for what he thought was a foul by Simon, only for the video assistant to overturn the decision after revealing it was actually Donachie who handled the ball? 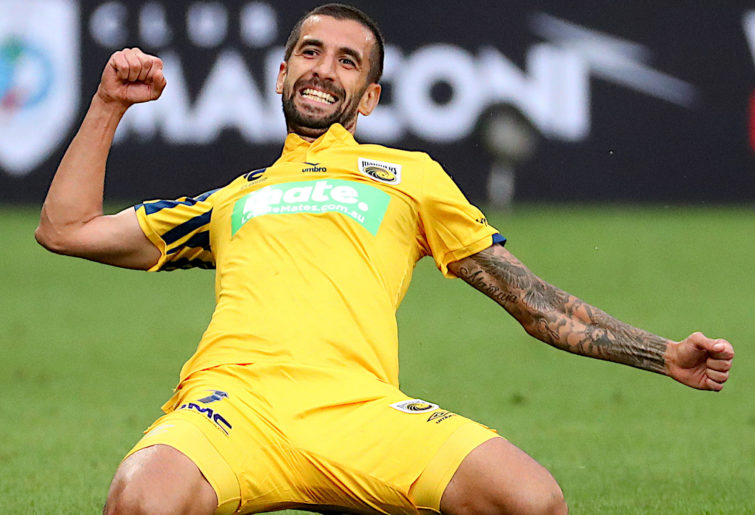 And then, when the game looked destined to finish 2-2 deep into stoppage time, was the VAR right not to intervene once Ams pointed to the spot after Leigh Broxham shouldered substitute Michael McGlinchey off the ball?

Ams looked somewhat sheepish when awarding the penalty, almost pointing to the spot with a shrug of the shoulders as if to suggest the video replay would sort the situation out.

On replay it looked a soft decision, but you’ve seen those sorts of penalties awarded in the past – although usually before the advent of video replays.

So the question remains: did VAR add to the spectacle in Gosford, or detract from it?

Just about everyone in the game, from fans to players and coaches, wants to get rid of the VAR.

But how realistic is that wish? Especially when in the pre-VAR days, some of those fans and players and coaches were the first to complain the second a referee made a mistake?

Much as I’d prefer not to zero in on the officiating, it’s hard to deny that controversy seems to follow Ams around.

But there are some – including Fox Sports commentator Brenton Speed, although he didn’t call the game in Gosford – who think Ams got everything right on the night.

Brilliant reffing Kurt AMS. Didn’t give pen to Simon when it wasn’t. Gave one pen when VAR pointed out his mistake. Then gave pen for foul by Broxham’s clear shove on McGlinchey. Brave – because others don’t give! But well done. #CCMvMVC

Victory officials, however, are unlikely to be too thrilled with any of the refereeing.

You wouldn’t have known that from Marco Kurz’s post-match comments to Fox Sports’ sideline reporter Adam Peacock though.

Asked twice by Peacock to give his thoughts on the controversial VAR decisions, Kurz decided discretion was the better part of valour and chose to say nothing.

Peacock was entitled to ask the questions, but had Kurz unloaded in similar fashion to the way his German compatriot and Western Sydney Wanderers coach Markus Babbel did late last year, would Fox Sports have paid the fine?

After all, it felt like the broadcaster benefited as much as anyone from all the drama VAR created.

Kurz was sent off at full-time after remonstrating with the fourth official but both he and assistant Filip Tapalovic showed some degree of restraint, with Tapalovic quick to usher the players from the field after the final whistle, before Kurz was more than measured in his post-match comments.

If nothing else, the win was good news for long-suffering Mariners fans, who have now seen their team move to within two points of sixth-placed Victory.

And the result provided a vindication of sorts for controversy-magnet Simon, who almost instigated a brawl before rattling home both spot-kicks and irritating an army of social media critics in the process.

However, most of the online vitriol was reserved for the VAR decision-making process.

Plenty of fans would argue that all the VAR decisions ended up being correct, but plenty more might suggest the technology shouldn’t have been in use in the first place.