If you had asked them last week about the Baltimore Ravens, they would have narrowed their eyes, rubbed their chin and very carefully explained to you why they are the Super Bowl favourites and that Lamar Jackson is simply unstoppable at quarterback.

These people were fooled.

Anybody who went into Sunday morning’s (AEDT) match with their eyes wide open knew the Tennessee Titans were the hottest team in the league. And sure enough, they left those pesky Ravens buried in a shallow grave somewhere on the outskirts of town.

People were laughing at me when on Saturday night I said I was wagering my reputation on the Titans stomping them. Ryan Tannehill has clearly learnt from Nick Foles two years ago and has big plans to crash the NFL play-offs this year. There’s also a lot of resemblance between the Titans’ run and the two New York Giants teams who won in 2008 and 2012.

They have the running game and the league-leading rusher Derrick Henry to make sure that he doesn’t have to take too many risks.

Their defence is solid. It can make stops and it doesn’t have to be on the field all game because of Derrick Henry and Ryan Tannehill’s synergy. 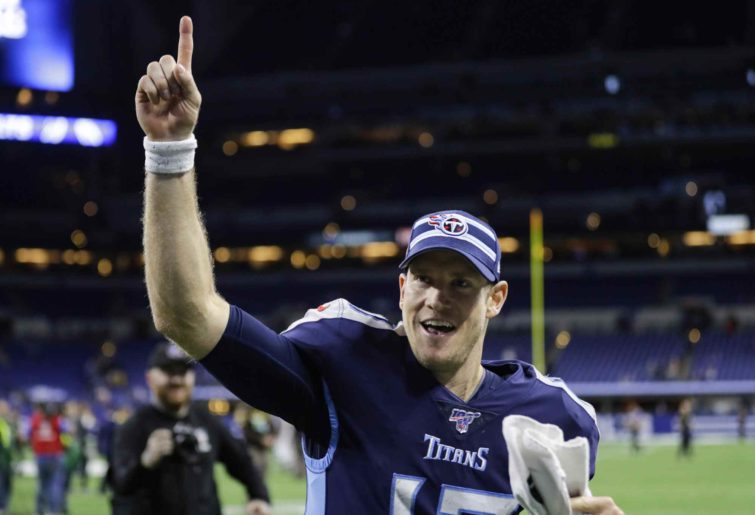 The Tennessee Titans are a perfect example of what complementary football is, which I would argue is much better than merely having an outstanding defence or an outstanding offence.

Having a good offence and a good defence – two different teams that somehow play together despite never being on the field at the same time – is what separates the men from the boys.

They have to thank excellent head coach Mike Vrabel for putting this all together. He should probably win coach of the year. If he doesn’t, it would be a great shame.

Baltimore had such a dominant regular season, regularly whipping teams, that they completely freaked out when only a few things went wrong for them early on. It was like walking into the VIP room and losing your cool when there isn’t enough ice in the champagne bucket. They behaved like spoilt children who had lost their mother for a few minutes in the supermarket.

What ended up happening was horrible – a classic case of a widespread panic burning a team’s own house down.

Lamar Jackson ended up throwing the football 59 times with a grand total of only nine handoffs going to their running backs. An awful statistic to read.

Their defence tried only for big plays, game-changing interceptions and forced fumbles. As as result Derrick Henry ran for 195 yards and even threw a touchdown himself as Baltimore were unable to stop the run, the first thing one must do in order to beat the Titans.

It is very easy to compare the Raven’s meltdown to Kansas City’s tremendous success the other night.

Patrick Mahomes has had far less chatter about him this season than last season, but he has quietly gone about his work after recovering from a midseason injury. Indeed I would argue that most of his hype has been sucked up Lamar Jackson.

Mahomes is a far better player than Jackson. There is no arguing this if we look at both of their play-off records thus far.

Jackson has had two highly embarrassing public meltdowns, whereas Mahomes in his two seasons has taken Kansas City to the AFC Championship twice, only narrowly missing out on going to the Super Bowl last time against the Patriots.

Yes, on Sunday Mahomes found himself down by 24 points early in the second quarter. He remained calm and targeted Travis Kelce often down the middle of the field for easy completions. He made sure he kept the Texan’s defence on the field for long drives.

Soon they became exhausted and were revealed as the cheap and broken imitation they were. The Texans may have some big names, like JJ Watt, Whitney Mercilus and Bradley Roby, but in truth they’re not up to the task.

The Chiefs had regained the lead by half-time. Then they humiliated Bill O’Brian and the Texans, making them look like complete and utter idiots.

Everybody will talk about their high-powered offence, but it was how Kansas City’s defence complemented their offence that won them the game. They shut down the Texans in the second half, making multiple stops on fourth down, letting them score only one more touchdown.

The NFL is an easy enough sport to come back in due both to a team’s ability to stretch out the length of a game and for the potential for sudden all-or-nothing explosive plays.

The Tennessee Titans are the hottest team in the league. They have the best game plan and system out of the four remaining teams. Against the Chiefs they will win by keeping Mahomes off the field for most of the game.

It will be difficult and the game will go down to the wire, but Derrick Henry can conquer the Chiefs’ defensive line.

Then the team with the closest system to them, the San Fransisco 49ers, will play the Titans after disposing of the Green Bay Packers, who have reached their ceiling.

The 49ers will be a very difficult task for them to beat. Like the Titans, they boast an elite rushing attack with a stud tight end in George Kittle and easily the best defence in the league. They are in fact a much better team than the Tennessee Titans on paper.

But sometimes football, despite how methodically I have just tried to explain it, simply doesn’t make any sense at all. The Tennessee Titans have a feeling about them at the moment, and that is difficult for any team to handle.

Coming in as the sixth seed and playing like lunatics that do not fear anything is a very difficult kind of spirit to stop. Beating the Patriots in Foxborough, wasting the Ravens at home – defeating the Chiefs at Arrowhead would just add another notch in their belt.

Then beating the 49ers doesn’t sound too difficult at all.