Talent alone should have them contending to win the Eastern Conference Finals and while they currently match the Bucks for best home-court record in the NBA, the 76ers somehow find themselves sitting sixth in the East.

Last season they pushed eventual champions Toronto to literally the last shot of a seven-game series when Kawhi Leonard sunk Philadelphia sports fans hearts with ‘The Shot’ and with Leonard subsequently leaving in the offseason, many pundits had Philadelphia and the Bucks as the two best teams in the East heading into the 2019-20 season.

The Bucks currently have a league-best record of 37-6 led by MVP Giannis Antetokounmpo, but why are Philadelphia sitting sixth with a 7-14 record away from their home court?

Losing All-Star Jimmy Butler to eastern rivals Miami is a big loss, he was the go-to-guy when games were hanging in the balance deep in the fourth and JJ Redick was their best three-point shooter that helped stretch the floor when the ball went into Joel Embiid in the post.

Statistically Embiid is the best post player in the NBA right now but teams know this, double-teaming Embiid as often as they possibly can. Embiid is a willing passer but they don’t have a Reddick type this year who can win games from beyond the arc.

It is well documented that Ben Simmons doesn’t like taking jump shots, and he didn’t make a single three-point shot in his first two seasons in the NBA. This is what is holding Simmons back from being a top tier superstar but the tools he does have in his arsenal are like nothing we have ever seen before.

His ball-handling, passing, defence and rebounding are all elite, a 208 cm point guard with a 214 cm wingspan causes headaches when he is on defence and he is almost impossible to stop in transition with his combination of size, strength and speed.

Every player has their weaknesses but Simmons’ are accentuated more than others because it seems like he has no interest in even attempting jump shots.

Coach Brett Brown has publicly said he wants Simmons attempting at least one three-pointer per game but as it stands he has made two from five attempts this season from 40 games. It’s not always about whether he makes or misses but if he is at least attempting threes then teams have the option to either let him shoot an uncontested three, which he should make some of, or get out to contest the shot meaning Simmons can use his strengths of blowing by someone to get to the hoop for a dunk or make that pass to get an assist.

Simmons and Embiid are both great players and will have plenty of success in the NBA whether they stick together or not but it must be said at this present time, they do not complement each other enough to win a championship. Playoff basketball is mostly played in a slow tempo and in the half-court, which Simmons doesn’t excel in.

Embiid can dominate in these situations but when the double teams come he needs shooters around him so he can find the open man. Tobias Harris is a good shooter and then Furkan Korkmaz, James Ennis and Josh Richardson can shoot the three-ball inconsistently so it comes as no surprise than Philadelphia rank in the bottom ten for most three-point shooting stats. 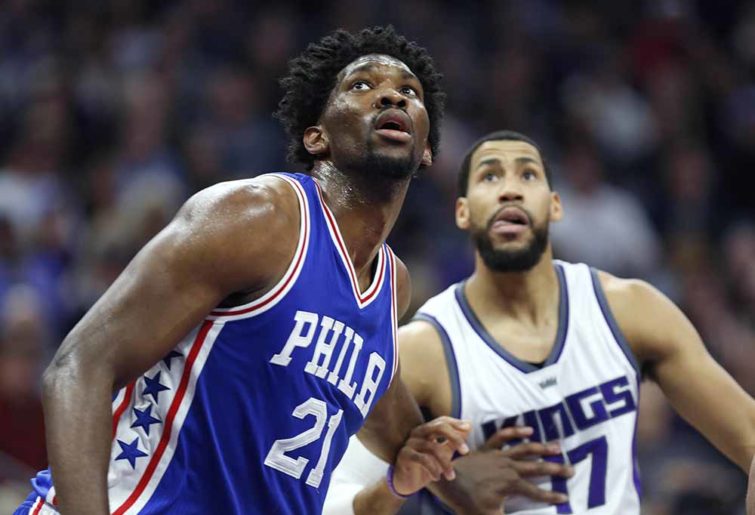 Imagine the success this Philadelphia offence could have if Embiid had a knock down shooter at the point guard position.

Whilst Simmons doesn’t complement Embiid as well as he could, I also think Philadelphia would be mad to trade Simmons as his strengths far outweigh his deficiencies, hence why he made the All-Star game last season and Philadelphia was one shot away from playing in the Eastern Conference Finals.

They will make the playoffs again this season and will be a tough out for any opponent. Brett Brown’s men do have championship aspirations but I just can’t see this squad getting it done in 2020.

All off-season we saw videos of Simmons knocking down jump shots in pickup games but it really hasn’t translated to the NBA, it was exciting seeing him knock down his first and second three of his career and the Wells Fargo Centre home fans went ballistic each time.

Hopefully, this boosts Simmons’ confidence and we see plenty more during his already impressive career.

Simmons’ jump shot is the key to unlock Philadelphia’s championship aspirations and while this probably isn’t the year they get over the hump to make the NBA finals, another off-season with Simmons in the gym working on his jump shot means there is no reason this Philadelphia team can’t knock off the east and contend for an NBA championship.

It is easy to forget Simmons is only 23 years old and Embiid is only 25, they have plenty of time on their hands and will continue to grow and improve with each other over the coming seasons.