Australia will return to the scene of where they turned their cricket fortunes around for Sunday’s ODI decider against India in Bangalore.

It was at the M Chinnaswamy Stadium last March that Australia went from enduring the most difficult run in recent memory to the resurgent team they are today.

Chasing 191 for victory in a Twenty20 match, Glenn Maxwell hit 113 not out from 55 balls to take Australia to victory and a 2-0 series win.

Before that, Australia had won 11 of 37 matches across all formats in a period dominated by the ball-tampering scandal.

Since then, their record is 29 wins from 39 games and they have not dropped a bi-lateral series.

They’ve retained the Ashes in England, made the World Cup semi-finals, completed a perfect home Test summer and won ODI series in India and the UAE.

“It gave us a real confidence, beating the best side in the world, in their own conditions.

“I think that Indian series win, probably the T20 series win, to be honest (was when I realised we could give the World Cup a shake).

“It really felt like a special group, a couple of really special wins where we felt like we could win from anywhere.”

Maxwell’s big hitting from that night will serve as a warning for bowlers though ahead of the third match of this year’s three-game ODI series.

The boundaries are short and the average run-rate at the venue in one-day cricket in the past 12 years is 6.28.

The ball flies across the outfield, while it’s renowned as a venue that’s often raining sixes.

The conditions are expected to be similar to Rajkot, where India’s first-innings score of 340 in their 36-run win was considered to be close to the par score.

“It just means your margin of error is so small,” Cummins said on Saturday.

“Even if you get it on middle stump the batter can turn you to the legside. Here the outfield is so quick it just races away.

“And here you just can’t give any width. It makes our job (as bowlers) a lot tougher.

“Like a lot of the Indian grounds (Bangalore) just gets really loud.

“You’ve just got to stay calm. Fifty overs is a long time so if they get on a roll just making sure we stay nice and relaxed and focused.” 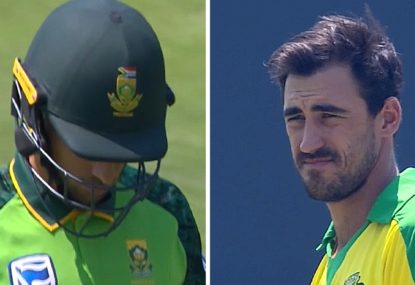