This news has most certainly raised a few eyebrows.

Despite his flaws as the coach of my beloved North Melbourne, I remain a fan of Brad Scott. He was highly regarded at the club and oversaw a tumultuous time in the club’s history. I do question, however, why he is needed at AFL headquarters.

The job title is definitely a sign of the times as far as the AFL is concerned though. To the chagrin of many a fan, the administration loves nothing more than dabbling in ‘competition evolution’ matters. The 2019 season, in particular, was subject to plenty of tinkering and think-tanking, which included but not limited to:

The AFLX’s lame fest, AFLW’s ill-conceived conference-based draw, the implementation of ‘Behavioural Awareness Officers’ at Marvel Stadium and their misguided crackdown on barracking, the 6-6-6 rule, touted as the end to congestion and low-scoring, which ultimately resulted in the lowest average scores since 1967, the hastily introduced ARC ahead of the finals, the AFL’s answer to the NRL’s ever so popular Bunker in reviewing scores, Steve Hocking’s declaration of his disdain for tackling and that he doesn’t want it to be a ‘feature of the game’, the mooting of a reduction in the length of the half-time break that nobody wants and assuring fans that the AFL knows what they really want is a night grand final despite all of the noise being to the contrary.

With all this evolution in the midst, it’s no wonder they believe they need someone to manage it, especially given that Hocking is a sucker for answers to questions that aren’t being asked (well, maybe asked by broadcasters as opposed to fans).

The afl.com.au announcement lists Scott’s responsibilities as ‘… assessing game trends with various stakeholders including players, coaches and analysts’ while also having a ‘major role in decision-making around rules, regulations and growth of all AFL competitions’. The concern here is the continued link between the rules of the game and the growth of the game.

This is where the AFL constantly shoots itself in the foot. Read any social media comments, talkback radio, fan polls or blokes at the pub and the theme is that people are increasingly turned off by the constant meddling in the game they love.

Many sceptical fans have also pointed to the strange job title as evidence of a ‘job for the boys’, or a position that is made up for the purpose of getting North Melbourne off the hook for paying out the remainder of Scott’s contract. I do not know if there is merit to these claims, but the club has been done a favour nevertheless. For this reason alone I am elated. 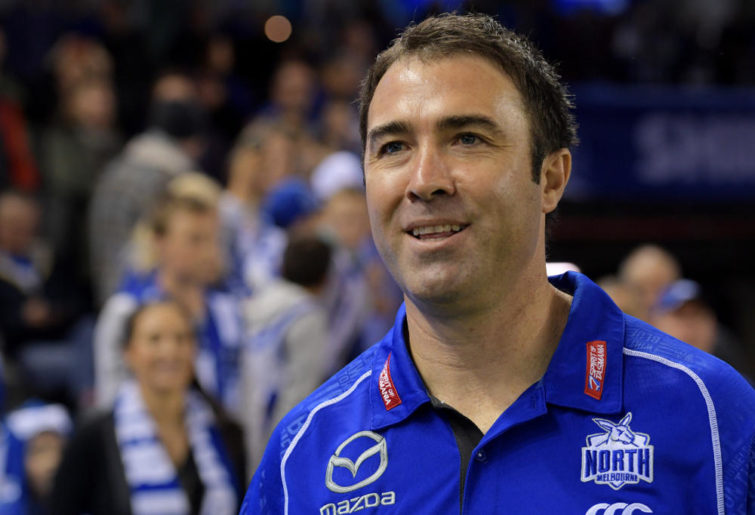 If it is truly a pretend job, then AFL fans should be rejoicing. For all I care, Scott could be spending his tenure on a golf course or a beach somewhere, so long as the interference with the state of the game is kept to a minimum. One of the criticisms levelled at him during his time at North was his inability to evolve his game plan as the years went on, which ironically could hold him in good stead in his new role.

For those who were fans of the 90s sitcom Seinfeld, the Penske file would be familiar to them. For those who weren’t, George Costanza turned up to a job that he wasn’t even sure he was actually hired for, bluffed his way through his first week while the boss was on vacation and was given the all-important Penske file to work on.

He won an admirer in Mr Penske (of the Penske file) despite doing absolutely no work whatsoever.

Where am I going with this? Well, if Scott was to win over a large portion of AFL fans, he could do worse than adopt the same method as George. Less is best.

Let the game breathe for a little while and allow it to evolve on its own accord. Inevitably, coaches will revert to a defensive style until they adjust to any poorly thought out rule changes anyway. This should be his very own Penske file.

Then, when Scott’s done with doing next to nothing, he should treat himself to another holiday for a job well done. There will be no resentment from me if he does. He will have earned it.

The AFL grand final will maintain its traditional afternoon timeslot in 2020.